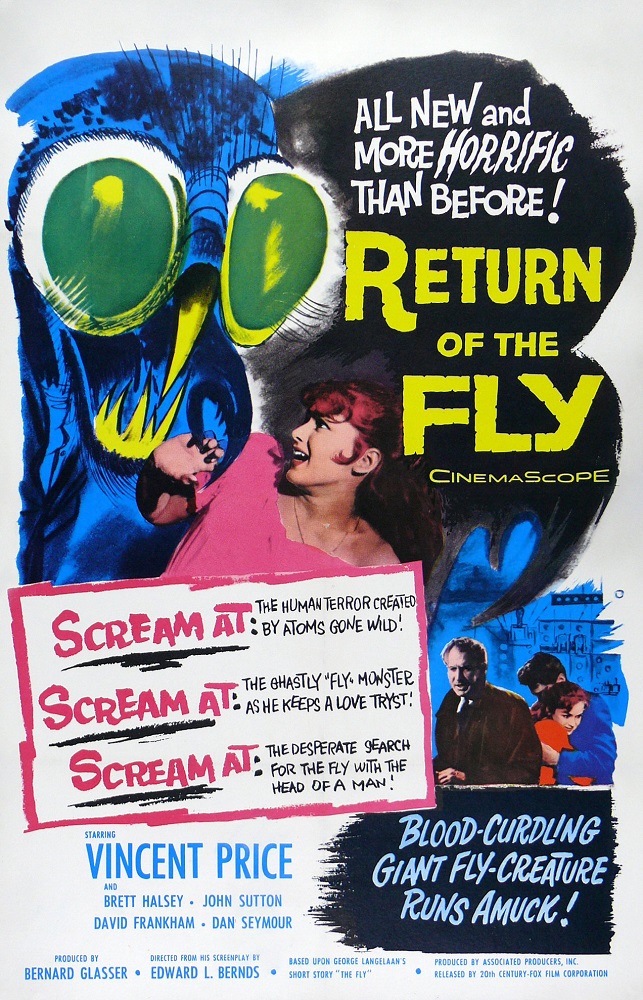 Sometimes we get super busy here at Cultsploitation and other times we just have the attention span of a fly and completely forget to finish something. Case in point The Fly Collection from Scream Factory. Ryne was kind enough to screenshot and review the first film in the box, but we sort of “forgot” to continue with it. Well, that all changes! I finally found the time to crack open the second movie in the series titled Return of the Fly, a film I’ve never seen before. How does it compare to the first one? Read on to find out!

A sequel to The Fly seems like an entirely unnecessary idea and one that would have a hard time working. If someone knows the circumstances of how the first incident happened, one would think it would be rather easy to avoid it ever happening again. Thankfully, the plot for Return of the Fly avoids this by introducing a new villainous character out for profit and he has no qualms screwing over his friends.

Return of the Fly takes places several years later, with a now grown-up Phillipe Delambre, who along with the help of his Uncle François (Vincent Price having not aged at all given the fact the film was shot a year after the first movie) try to rebuild the technology that brought down Phillipe’s father. Unfortunately, a partner by the name of Alan Hines (David Frankham) has other plans and ends up putting Phillipe into the contraption with a fly and presto we have a mashup. What doesn’t make sense, though, is the fact the half-human half-fly goes after Alan for revenge. Why would the fly know anything about Alan in the first place? If anything the small fly with Phillipe’s head should have been the one to go after the people that wronged him instead. The more you think about the story, it starts to come apart at the seams.

Nevertheless, plot holes and all, Return of the Fly is a fun sequel that fans of the first should enjoy. It’s got plenty of issues, but the campiness of the effects and the presence of Vincent Price is always welcome.

Return of the Fly is the second disc included in Scream Factory’s 5-disc boxset. Scream Factory originally released Return of the Fly in their boxset of The Vincent Price Collection II back in 2014. When comparing the screenshots between this latest release and the older one, the transfer looks to be the same, albeit slightly zoomed in on the new release. A medium amount of grain appears throughout the picture, with only a few scenes degrading in quality. There appears to be no excessive amount of film damage either. A fairly reliable transfer all-around. Audio is provided in DTS-HD MA 2.0 and dialogue comes through loud and clear. The sound effects during the use of the teleportation scenes are pleasantly loud.

Any new extra features come in the form of two audio commentaries. One is with actor David Frankham and Jonathan David Dixon. The other new commentary, which oddly enough is not listed on the back cover, is with Author/Film Historian Tom Weaver. Older features include a third commentary with actor Brett Halsey and Film Historian David Del Valle, Theatrical trailer, TV spot, and a Still Gallery.

If you already own The Vincent Price Collection II, you might be hesitant in buying the boxset for this release, unless you consider two new audio commentaries worth your while.