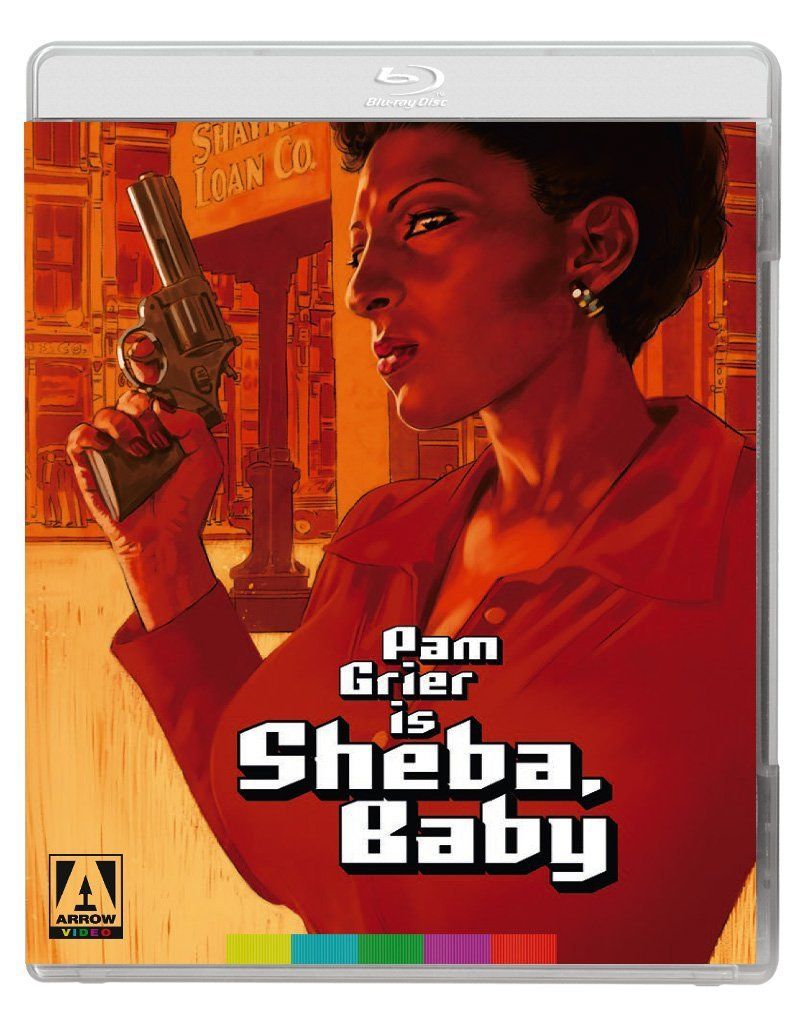 Sheba, Baby features Pam Grier in yet another shot at a blaxploitation leading lady, this time playing a somewhat classier version of her notorious characters without the nudity and sexuality that she became known for in Coffy and Foxy Brown. Instead, William Girdler’s turn at directing an action blaxploitation flick takes a more comedic route while also identifying the basic subgenre cliches of the time period. Sheba, Baby‘s late release (one of Pam Grier’s last blaxploitation films except for Jackie Brown) coincides with her other 1975 movie Friday Foster – in that its attempts at mixing a humorous tone with the blaxploitation revenge formula results in a film memorable only for specific scenes, not as a whole.

Sheba, Baby follows Sheba Shayne (Grier), a private investigator who heads home to Louisville after her father’s loan company is attacked by blackmailers looking for more money. It’s not the only attack that’s happened in the area, leading both Sheba and her friend Brick Williams (Girdler regular Austin Stoker) to believe that the hits are being ordered by the insurance company that insures her father’s store. Sheba uncovers a group of mobsters led by Pilot (D’Urville Martin), but finds out that he’s owned by an even bigger bad guy – the rich, white Shark (Dick Merrifield), because he’s a loan shark ya dig?

Girdler’s film follows the tried-and-true approach of the blaxploitation film, particularly Grier’s brand – take Grier’s character out of her normal comfort zone doing what she does, put her family or friends in danger (in this case her father), and then have her take down a bunch of henchmen leading to the real head mobster, a white guy. In particular, Sheba, Baby plays out almost entirely as expected, from the early portions of the film where Girdler gives an unsubtle hint about Sheba’s profession to her love interest with Brick to her father’s untimely death at the hands of dumb criminals.

In honesty, though, it’s a pattern that worked well for almost all blaxploitation movies, and here it’s no different. Girdler has a solid handle on direction, and the film moves through its plot at a quick clip. Sheba quickly shakes down Pilot in an entertaining scene that involves her threatening to cut off his head with a roller coaster; then she moves on to schmoozing Shark on his yacht, with Merrifield giving his best sleazy businessman impression – even going so far as to correct someone when they dare to call his vessel a “boat.”

The script, co-written by Girdler and David Sheldon, is often genuinely funny, and it plays with the humor in what could easily have been a more serious film akin to Coffy. Instead Sheba, Baby doesn’t take the darker route, giving the audience memorable characters like a pimped-out loan shark or a scene where Sheba starts a catfight with a woman on the yacht. At the same time, it means that there’s little substance to most of the film’s dangerous scenes, because Sheba often doesn’t take it seriously enough for the audience to feel like there’s any real suspense.

Save for a nice speedboat chase and a couple of good takedowns from Sheba, Girdler’s film is about as generic to the blaxploitation subgenre as one can get, and for those uninterested in the style’s more humorous approaches to crime drama, Sheba, Baby‘s a film that probably won’t hold your attention. Still, for those who enjoy Grier’s other films with similar premises, Girdler does a fair job with the script, with enough action sequences to keep the pace for 90 minutes. It’s just missing an element to make it stand out from the rest of the hardboiled films that released around the same time (along with Grier’s boobs, which make only a brief appearance).

CHECK OUT
Our full uncompressed gallery of screenshots from this Blu-ray.

Arrow Video has released a dual-format Blu-Ray/DVD of Sheba, Baby. Picture quality is, for the most part, very good except for a few occasional issues with shadows and darkness (noticeable early on in the film and then otherwise disappearing); outdoor shots have some grain (again, early in the film with a shot of the sky) but are otherwise without flaws. No scratches or damage to report. Audio is presented on the Blu-Ray as an uncompressed PCM track, which is obviously not the most sonorous but effectively recreates the original presentation of the film. No issues with audio drop-out or volume except for scenes that clearly already had that issue in the source.

Bonus features are numerous, though, including two audio commentaries from script writer David Sheldon and webmaster at williamgirdler.com Patty Breen, respectively. Both are nice additions. Also included is a new interview with Sheldon about his work on Sheba, Baby as well as his relationship with Girdler; here, he clearly pinpoints the rushed nature of Sheba, Baby‘s script (originally Honor) which explains its formulaic approach. Finally, an interview with film critic and writer of Temple of Schlock Chris Poggiali documents Pam Grier’s work at American International Pictures during the blaxploitation period. A trailer and a gallery round out the disc’s extras.

Of interest is reversible cover art and a pull-out essay on Sheba, Baby from Patty Breen, adding even more value.

If you’re a fan of blaxploitation in general, Arrow Video’s Blu-Ray is worth picking up; it offers some great special features, and the film itself is given a nice presentation despite its mediocrity. It’s a release worth having in to complete your Pam Grier collection. 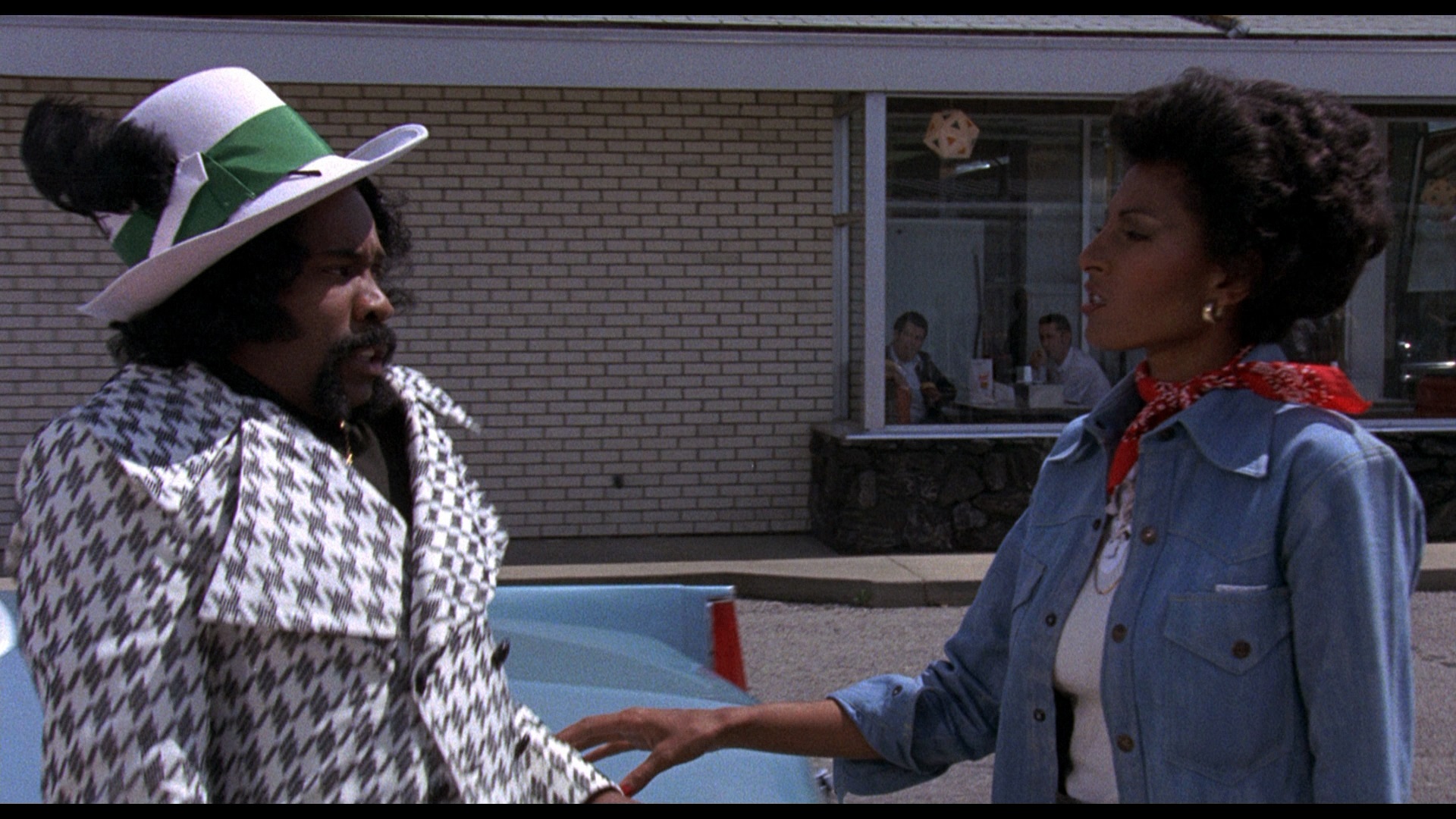 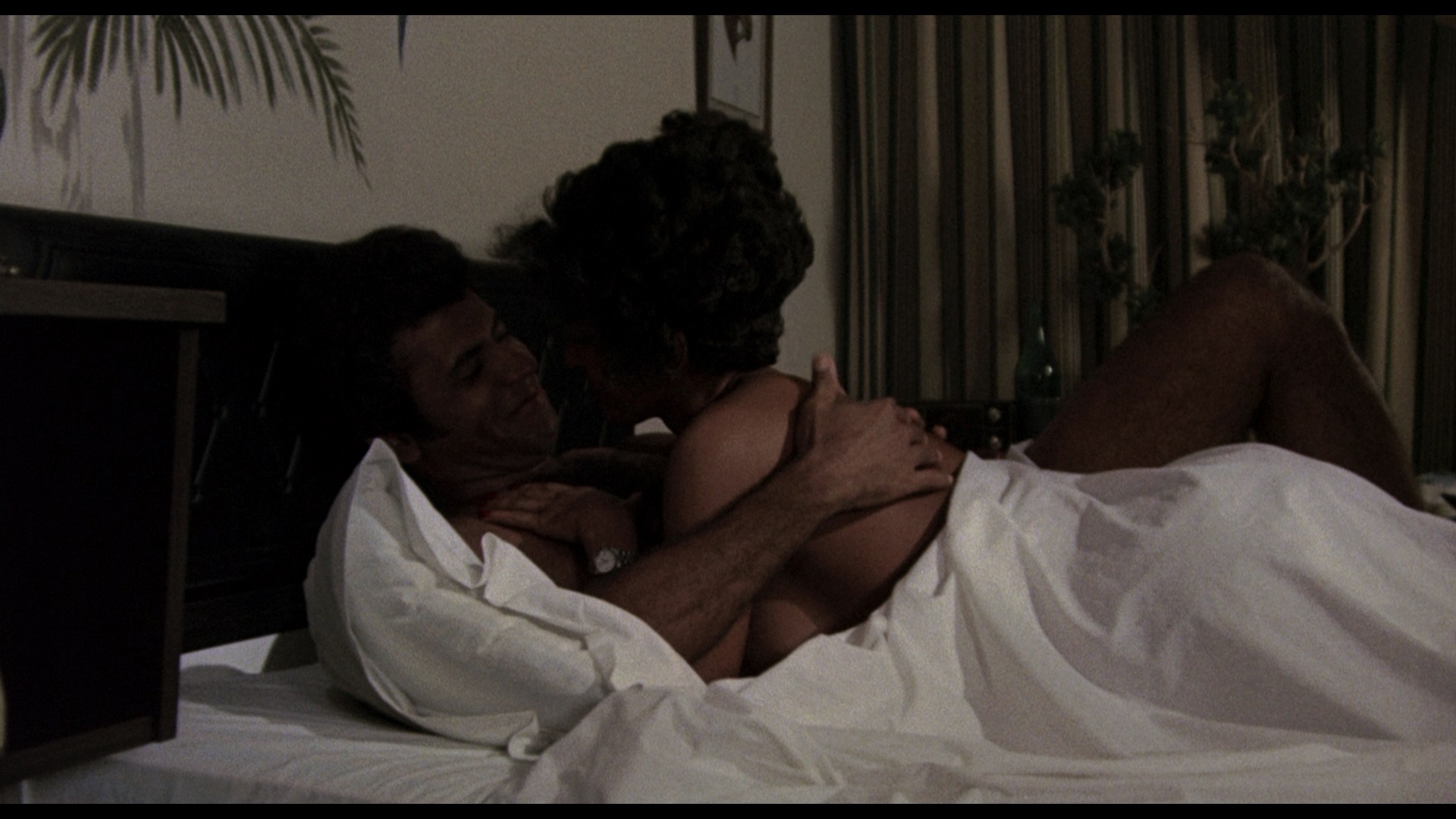 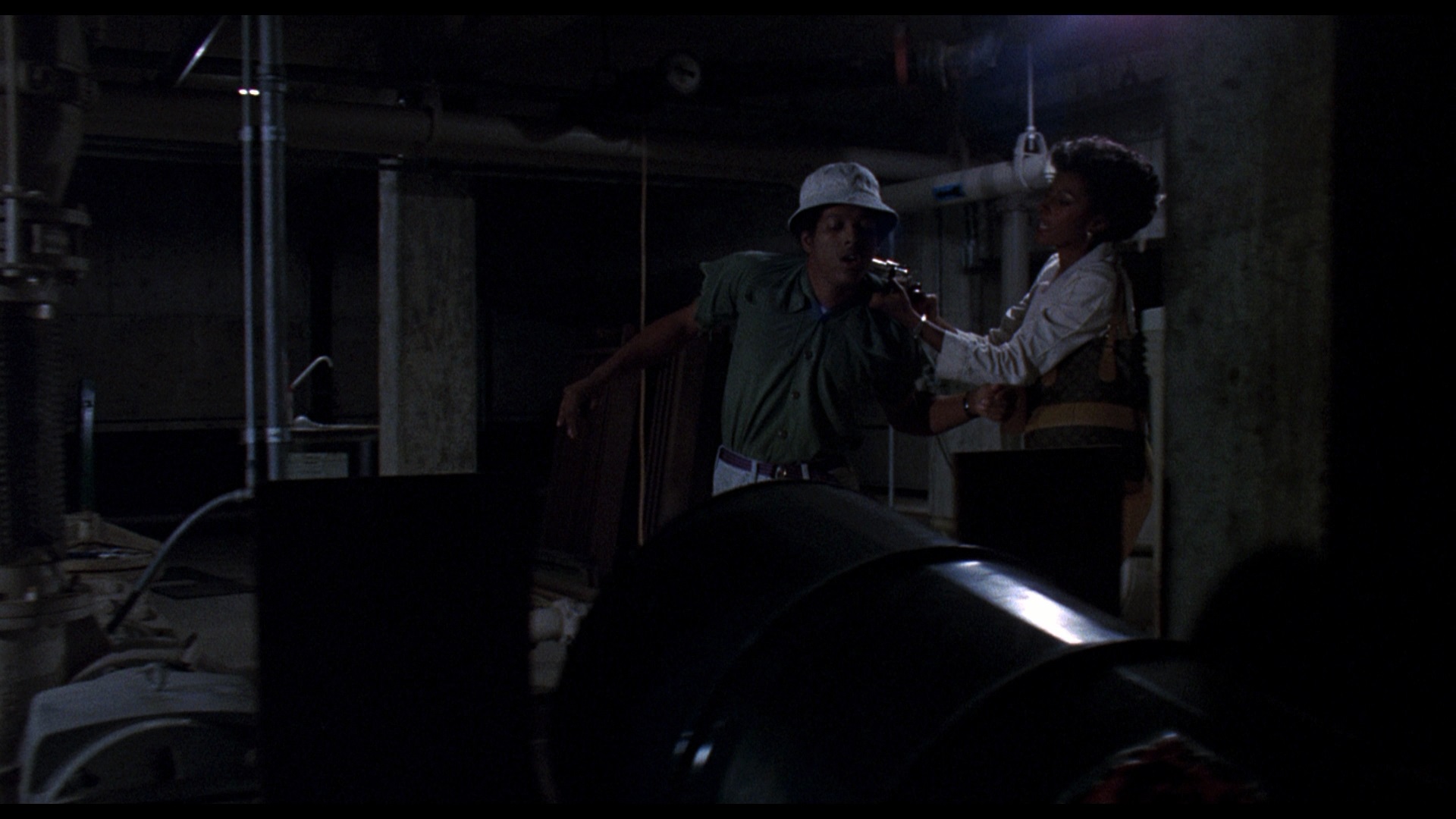 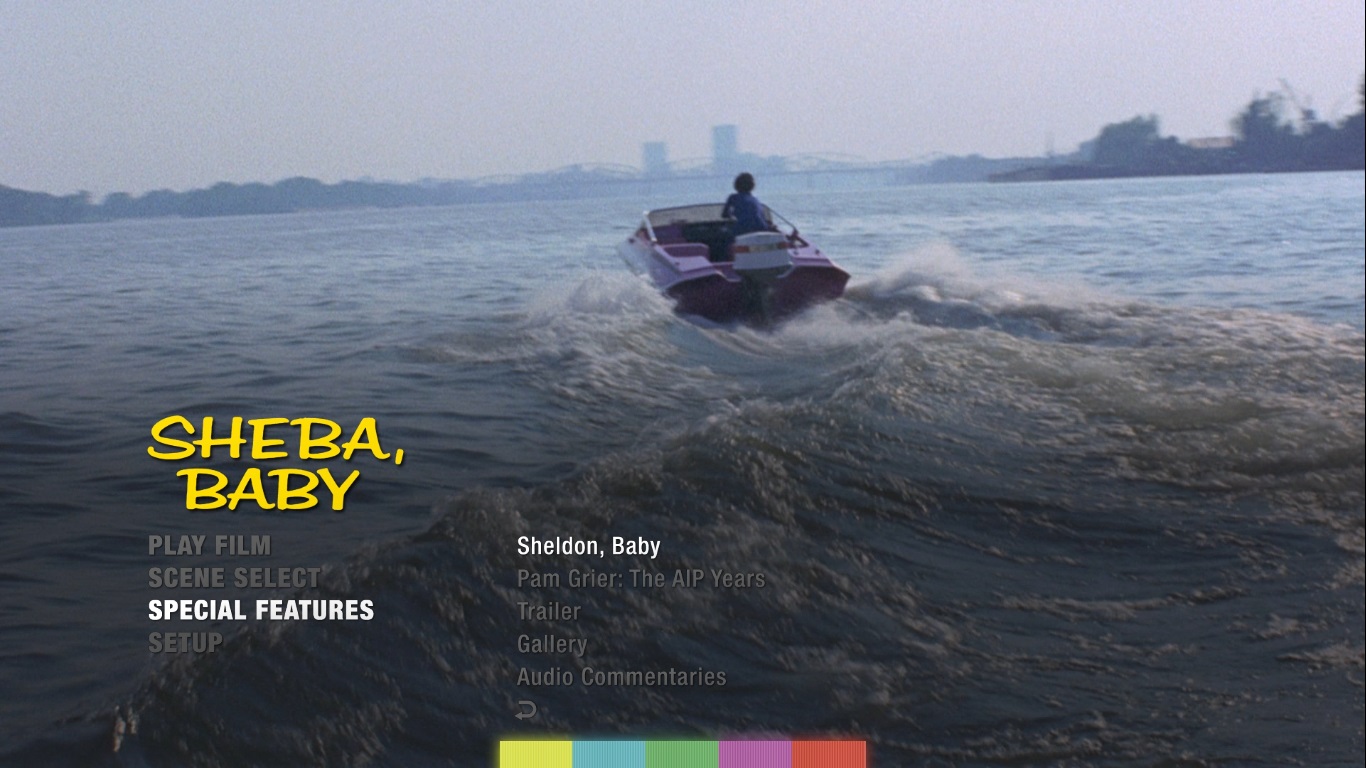 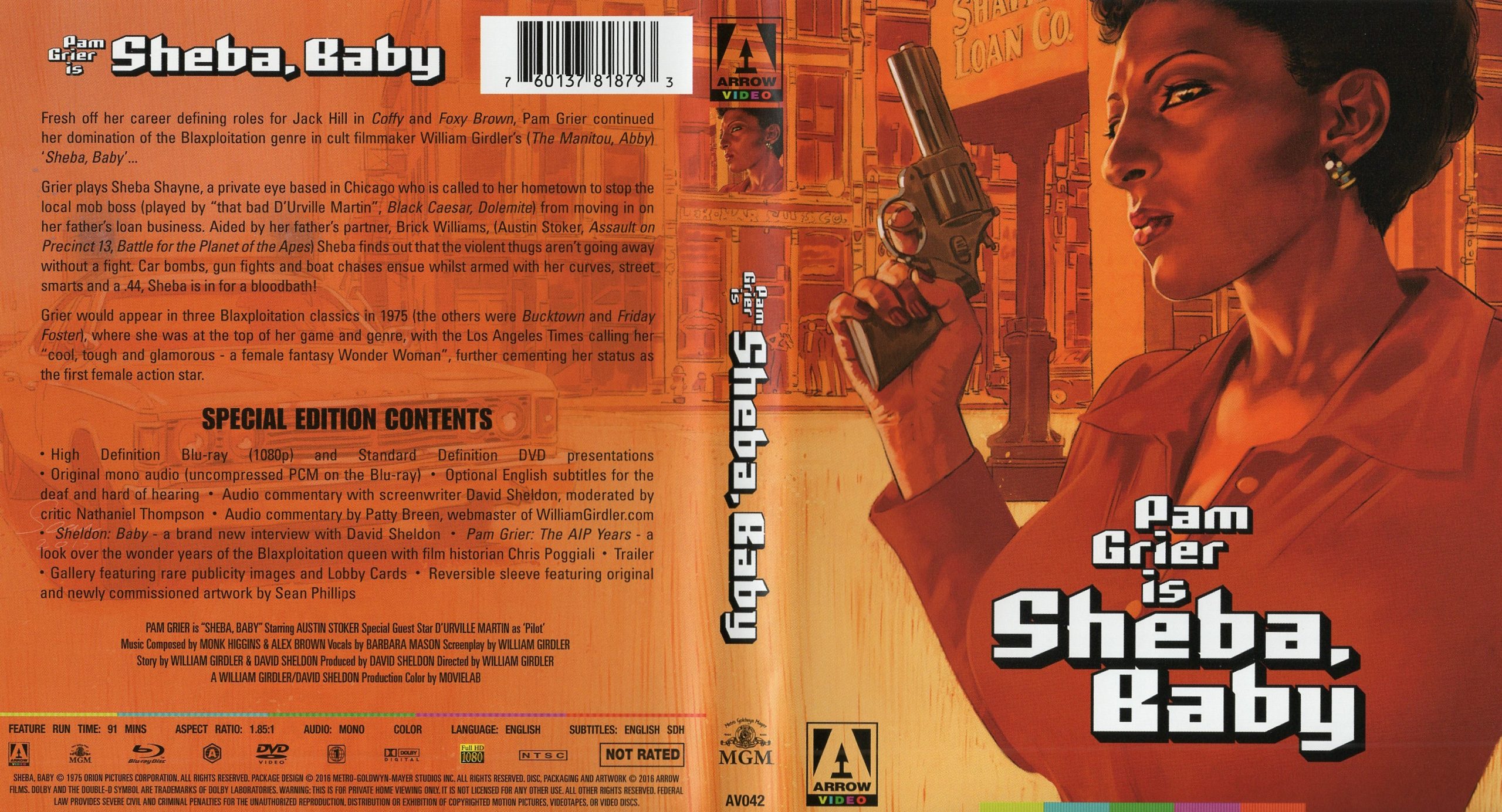 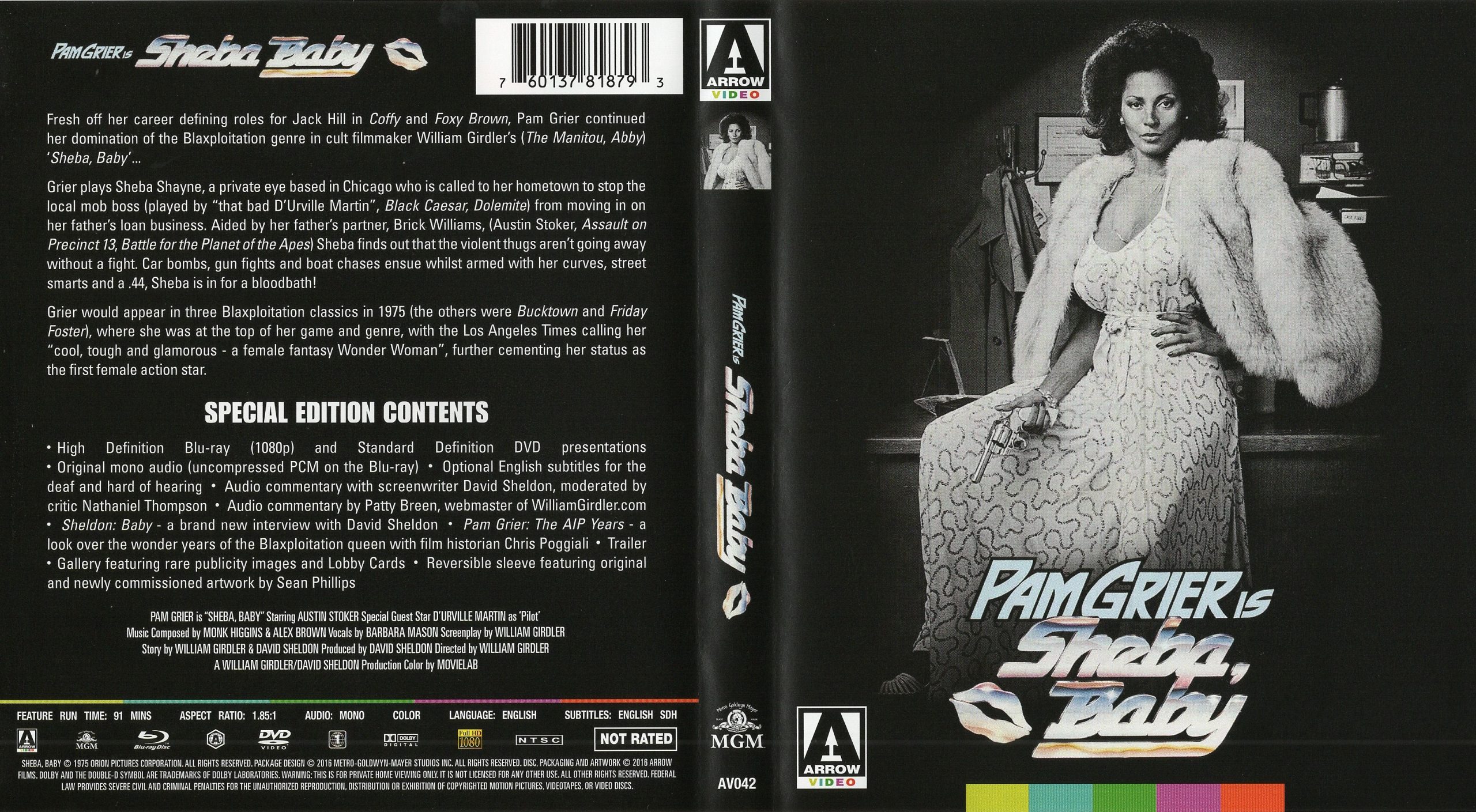 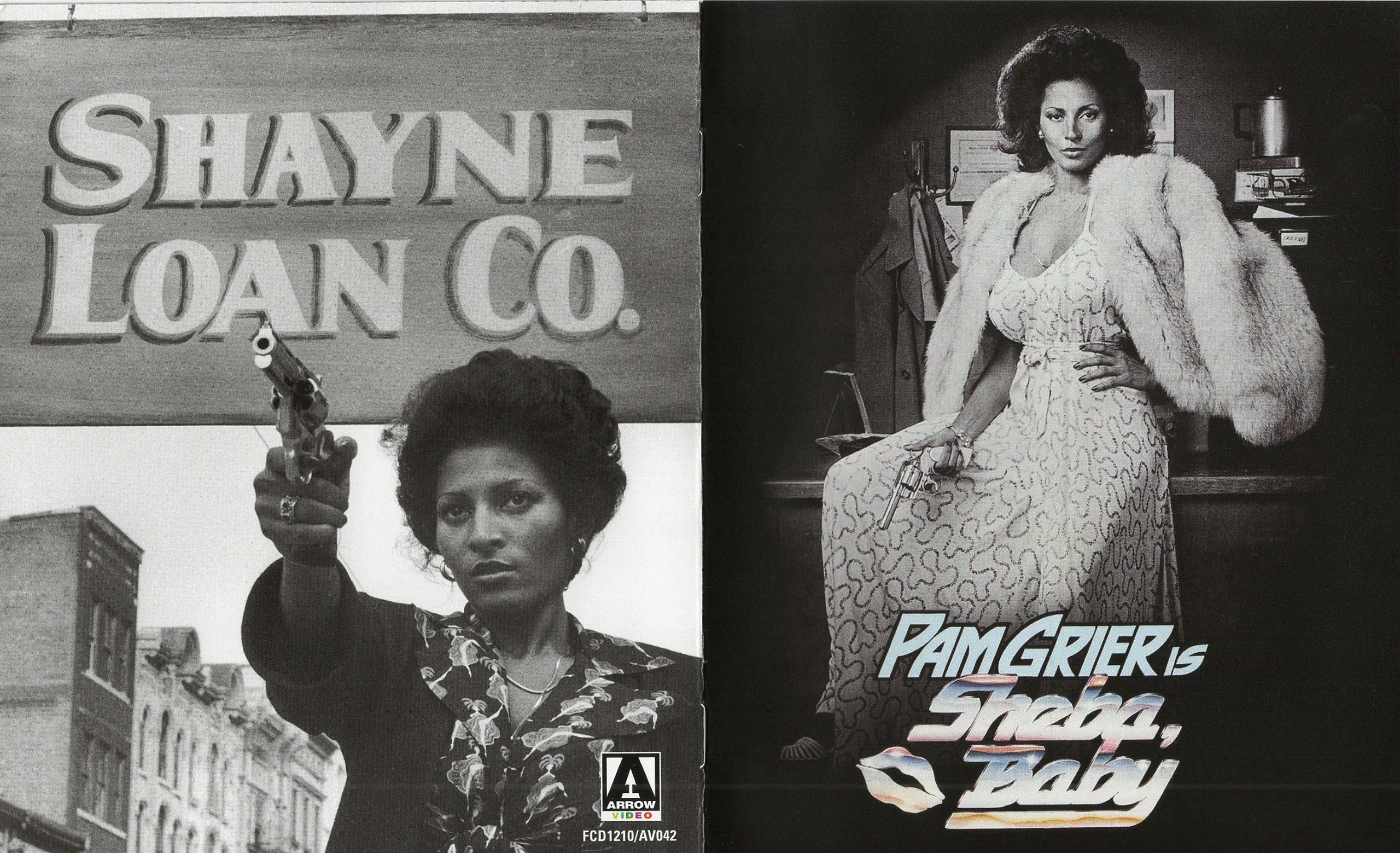 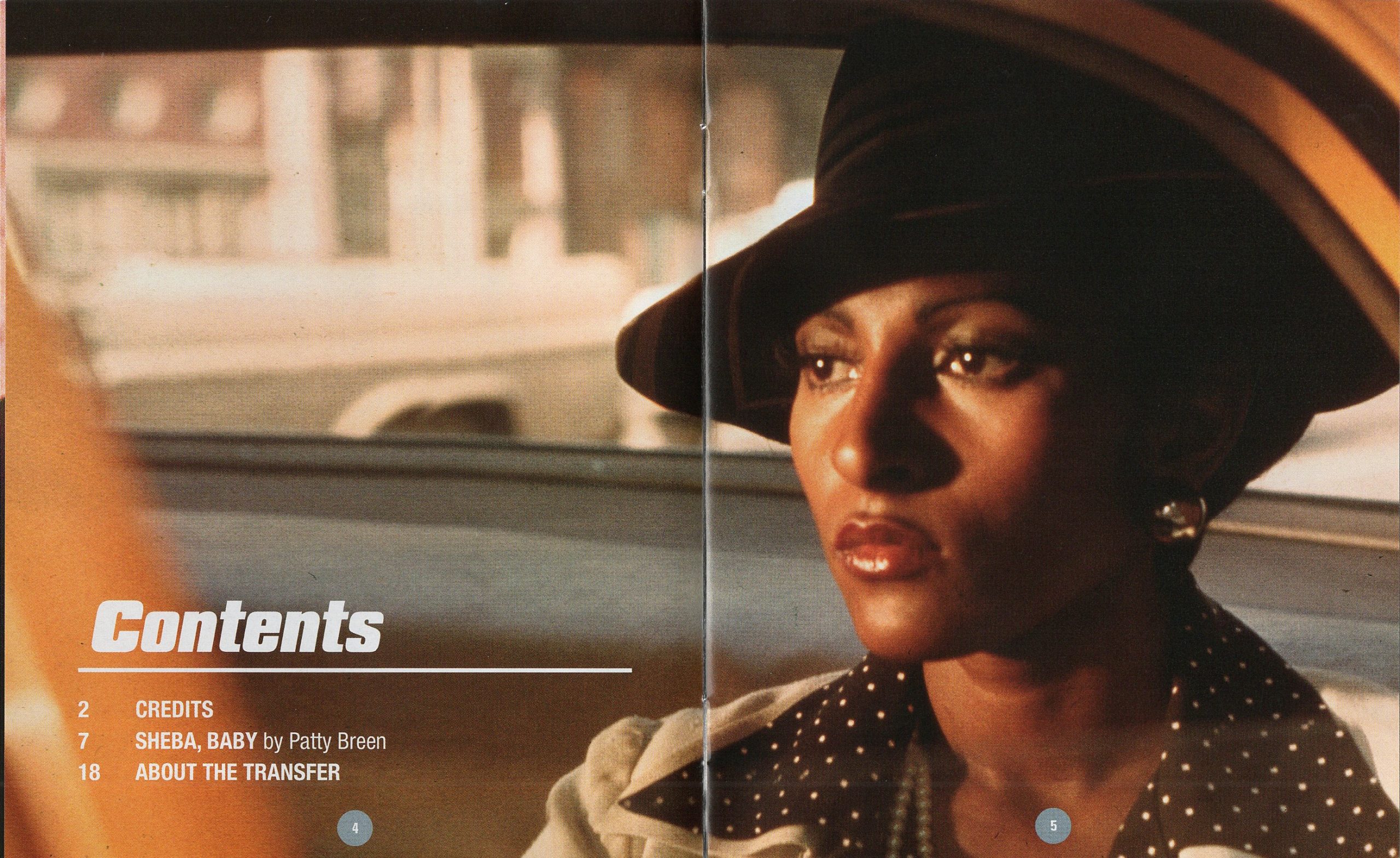 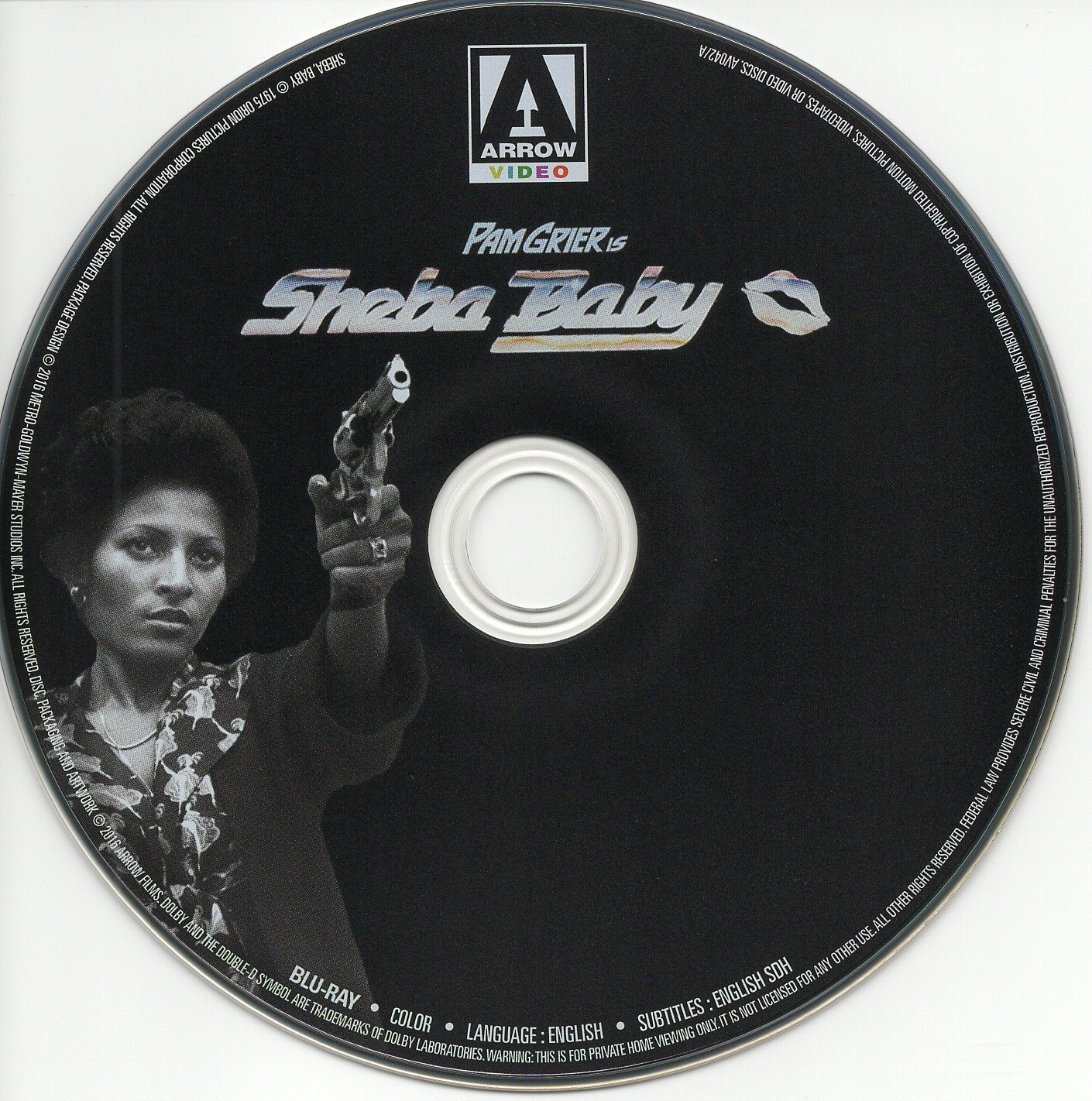