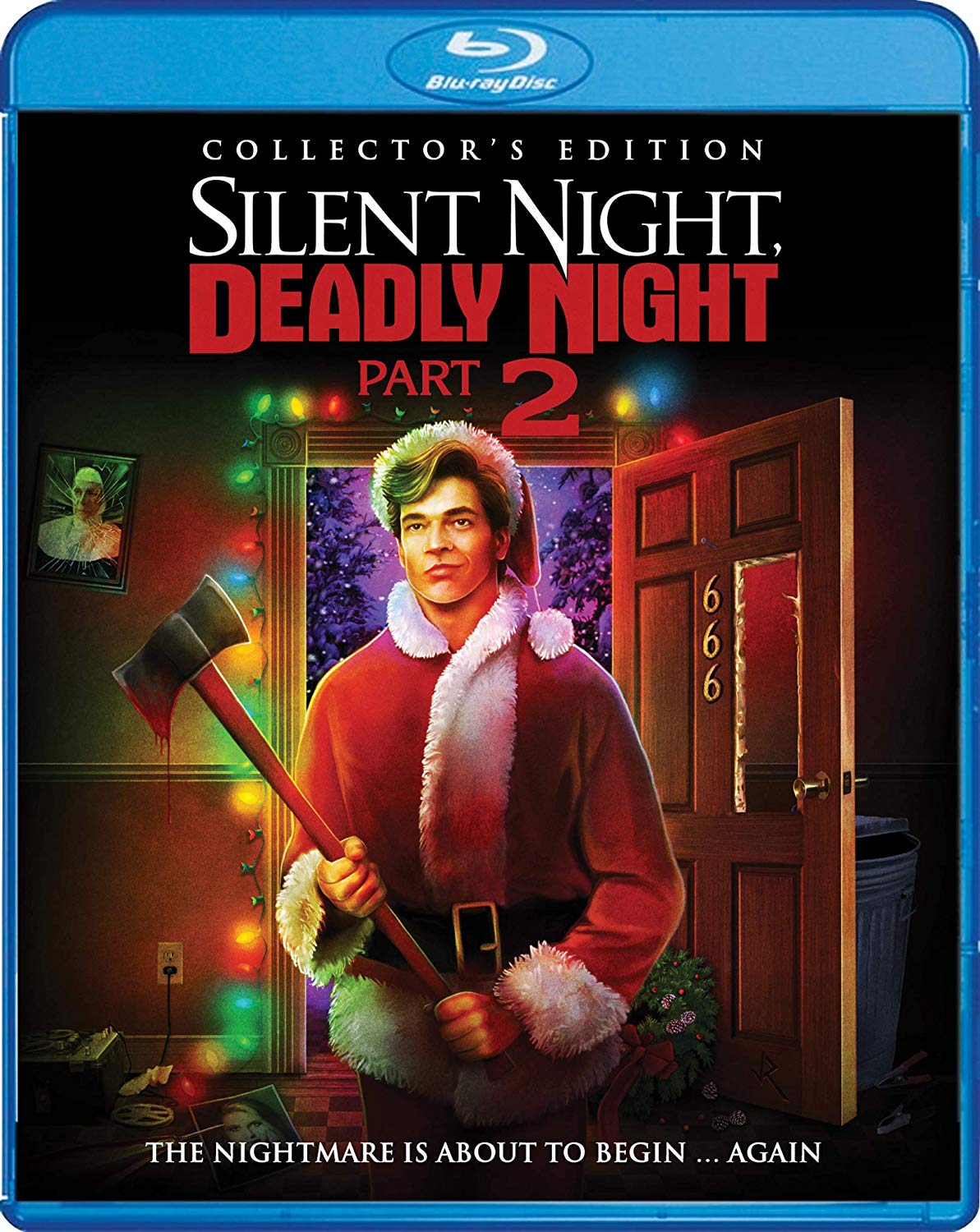 Silent Night, Deadly Night Part 2 is not a great movie, but it has snippets of one - and its trashiness makes it something special in its own right. Scream Factory has provided a lot of extra features on this release, though the 2k scan may not look as great as some might expect.
Film
Blu-ray
Reader Rating1 Vote
4.1

Silent Night, Deadly Night Part 2 is oft-recognized not for its quality but for its meme-ability – even in an age before the meme hit full peak. Eric Freeman’s memorable ejaculation “GARBAGE DAY!” will most likely (hopefully) continue to live on in its internet fame – perhaps infamy for Freeman – as this new Blu-ray release spawns a new era of fandom. But even if Silent Night, Deadly Night Part 2 didn’t contain this quotation, it probably still would have conjured up cult classic status thanks to the truly head-scratching decision to basically rehash Silent Night, Deadly Night‘s best moments into a new film, albeit this time from Ricky’s (Freeman) point-of-view – who, at the time, would have been an infant.

Ultimately, Silent Night, Deadly Night Part 2 plays as a greatest hits of the original film for about two-thirds of the film, with the final third being relegated to a wrap-around story about Ricky telling all of the background context to his therapist (James L. Newman) and then escaping from his mental hospital confines. And as the synopsis goes, it’s actually edited together pretty well by director Lee Harry, who manages to get all of the best moments (the boobs, the gore) into this one too minus the great montage set to “The Warm Side of the Door.”

But therein lies the issue. If viewers wanted to see Silent Night, Deadly Night, they could just go back and watch Silent Night, Deadly Night. So Harry also decided to include some mental derangement from Ricky towards the end of the film, and viewers would not be criticized if they wanted to just skip to the last half hour of Part 2. Even so, Harry’s contributions to the film aren’t nearly as memorable as the original; nor are they often Christmas-y, since only the final few minutes of the new footage takes place during the holiday. Harry has even stated in commentary that Silent Night, Deadly Night Part 2‘s additional kills are a bit less violent due both to MPAA restrictions and because they wanted to have them be a bit of a change from the original’s scenes. This often results in the new sequences being a bit less entertaining.

Scream Factory’s Blu-ray release of Silent Night, Deadly Night Part 2 starts with a disclaimer: the new 2k scan was pulled from an archival theatrical print because the original negative is lost. That’s not normally a good sign for the quality of the print, and it certainly seems to be the case in Silent Night, Deadly Night Part 2 as well; the archival print has some pretty big issues with damage and a less-than-stellar preservation. However, this is to be expected from an archival print and there’s really not too much that Scream could do about it. What we get is somewhat inconsistent in terms of picture quality; color can be drab, grain comes and goes depending on the scene, and certain shots have not fared well over time. Still, this is somewhat better than the editions I’ve seen previously, and it’s great to have the HD elements from Scream’s release of the first film included during those flashback scenes.

Audio is presented in DTS-HD Mono and still sounds quite good despite the obvious issues with the print. There aren’t any drops or fading, and everything sounds clear and concise. English subtitles are also included.

Along with the regular audio are two audio commentaries. The first one is new to this Blu-ray release, a conversation between director Lee Harry, Eric Freeman, and James L. Newman. The whole thing is quite entertaining despite the crew not being able to talk about much about the footage from the first film; instead, they find ways to insert discussion about the reasoning behind including the footage, why Harry edited certain scenes into this movie, and many references to ultraviolent shots that never made it to the final cut and were eventually lost like a much gorier umbrella sequence. This is a great commentary and Newman even admits getting a little upset with the writers and director during production, which Harry claims he never knew about. The second audio commentary was a previously recorded extra with Harry, Newman, and co-writer Joseph H. Earle.

The extra features that Scream Factory have provided for Silent Night, Deadly Night Part 2 earn the Collector’s Edition moniker. We have a highly informative 1-hour feature titled “Slay Bells Ring Again: The Story Of Silent Night, Deadly Night 2” which interviews Co-Writer/Director Lee Harry, actors Eric Freeman, James Newman, Elizabeth Kaitan, Darrel Guilbeau, and Kenny McCabe, and Makeup Effects Artist Christopher Biggs. They go through the entire history of how SNDN2 came to be, from its start as merely a recut of the first movie, all the way to the search for Eric Freeman many years later. You can tell Eric Freeman feels blessed by how popular and cult-worthy the sequel came to be, but he is humble in his performance and knows it’s not that great of a movie. Almost everyone on this feature knows the film isn’t amazing or anything, but the hard work that went into getting it made on the limited budget and time makes you appreciate the movie even more.

If you’re wondering why the next feature is with Makeup Effects Artist Christopher Biggs, who was already interviewed in the first feature, fret not as this 1-hour extra titled “I Don’t Sleep” goes into Biggs’ life in the industry, from his time with Roger Corman, his work on A Nightmare on Elm Street 4, Critters, Disney, and his numerous jobs as the fixer companies brought in to repair the issues other people created. This was a highly enjoyable sit-down, where we got to learn all about Biggs’ methods with practical and eventually digital effects. The man is highly knowledgeable, and it’s understandable why he was the go-to man for most companies.
Next on the features list is a short film starring Eric Freeman as Ricky Caldwell, who is being interviewed on screen by a psychiatrist about his thoughts on the movie made about his life (SNDN2). It’s obvious the short was made to be intentionally funny and cheesy, with “Ricky” praising Eric Freeman’s acting ability. In addition to the short film, we have a 10-minute filming location tour with Eric Freeman and Robert Patterson, who go through the various filming locations in Sierra Madre (a famous John Carpenter shooting spot). Rounding out the features are a trailer for Finding Freeman, and finally the theatrical trailer for SNDN2. That’s in addition to the slipcover and alternative artwork.
Overall, this is a great release from Scream Factory that continues their seasonal treat of presenting a new Silent Night, Deadly Night each year. Certainly worth it for those looking to add to their Christmas horror collection.