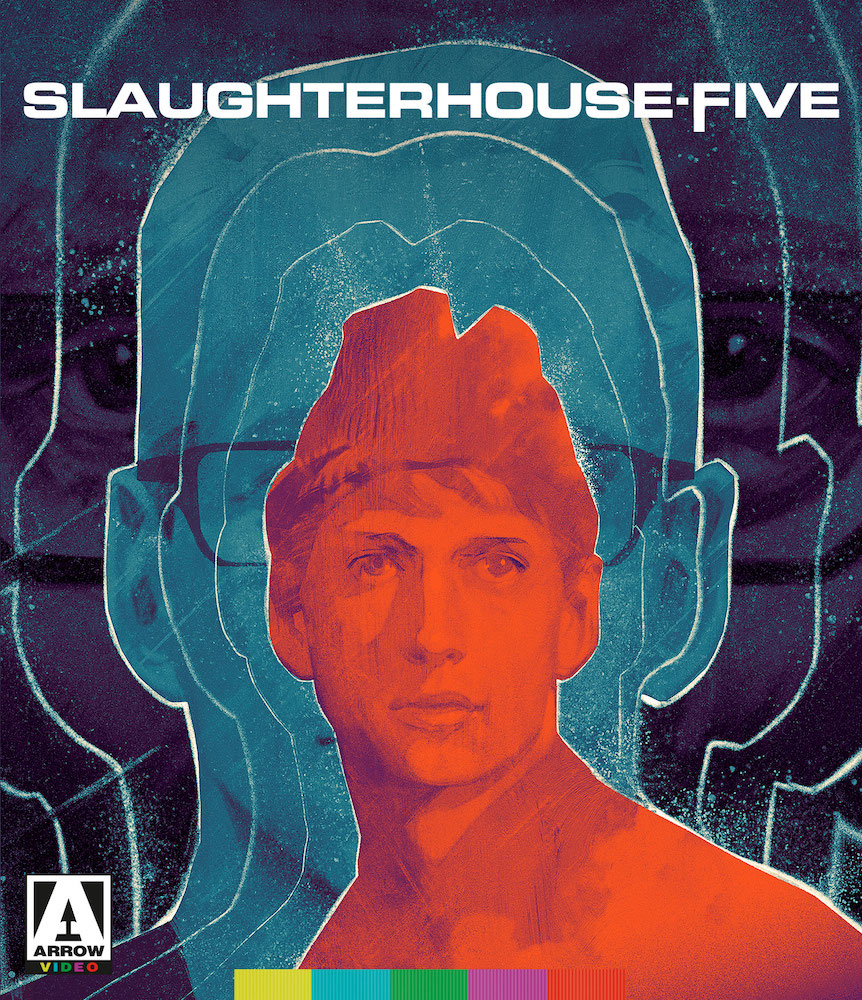 In 1969 Kurt Vonnegut published possibly one of his most influential novels, the lengthily-titled Slaughterhouse-Five; or, The Children’s Crusade: A Duty-Dance with Death, a science fiction anti-war story that pulled heavily from Vonnegut’s own experiences in World War II and the bombing of Dresden. Told in a disparate, time-jumping manner, Vonnegut’s short but prosaic tale used metacommentary and surrealism to help understand deeply human experiences. Over 50 years later, it’s still a book complex enough to warrant critical analysis.

Soon after the book’s release, George Roy Hill – coming off of a successful directing stint on Butch Cassidy and the Sundance Kid – decided to use his clout to make Slaughterhouse-Five into an unlikely Universal film. With its disjointed narrative, the book’s plot makes for a risky foray; it requires the viewer to be able to glean the details of protagonist Billy Pilgrim’s time-slipping without the narration that the book provides. Plus, Vonnegut’s sardonic writing style – bleakly humorous in its war and religious criticisms – doesn’t exactly translate well to mass audiences.

Hill’s resulting film, though, is a fairly good adaptation of Vonnegut’s ideas, restructured a bit by screenwriter Stephen Geller in order to work better for the silver screen. Michael Sacks plays Billy Pilgrim throughout the time-slipping of his life, from a war-going drafted soldier in World War II as a college-age boy to the future man he will become: an optometrist, fairly happy husband and father, and planet-hopping space traveler. Sacks does an admirable job in each of these roles, and he’s tasked with portraying a significantly different Billy Pilgrim in each encounter. Because the film slips through time, Sacks must change his countenance and attitude to mirror the development of character throughout time – Pilgrim’s demeanor isn’t stagnant, and Sacks does a good job managing it.

The other great element at play in the film is the editing, which manages to effectively manage the abrupt transitions in time Vonnegut employs in his book by going in a different direction. Slaughterhouse-Five uses objects or mise en scene to relate past to future, often in the same scenes. Some might argue that Vonnegut’s novel is meant to elude visual presentation, but Hill does the best possible job of portraying that time-slipping in a manner that’s easy to follow, and at times poetic too.

Slaughterhouse-Five‘s biggest downfall is the one that should be the most obvious. It simply can’t tackle all of the important themes from Vonnegut’s novel, and in its approach at brevity, it cuts some of the more important ideas out. Religious criticism, for example, is sorely lacking in the film, as is the presence of author Kilgore Trout who might be one of the most important author stand-ins in the novel. The deletion of some of these primary elements leaves a lot of meaning excised from the film.

Still, Slaughterhouse-Five is about the best adaptation of Vonnegut’s novel that one could ask for. It does a great job of skipping through time using cinematic techniques, and Sacks does quite well to portray the variety of Billy Pilgrims throughout the story. For fans of the novel, this is definitely a film to watch, if only to pick apart what it gets right and wrong.

CHECK OUT
Extensive gallery of screenshots from this Blu-ray.

Arrow Video has restored Slaughterhouse-Five with a 4k scan using the 35mm camera negative. Some may be surprised to find that the film still looks exceptionally grainy, with occasional softness especially in midrange shots. While I can’t purport to have seen this film theatrically, I would hazard a guess that the dingy graininess is actually the intention for the film, since much of its plot takes place in war-torn Germany with bombed-out buildings, lots of smoke, and other obstructive elements. While Slaughterhouse-Five doesn’t look pristine or perfectly clean, this 4k scan is a great representation of the griminess of the film’s plot.

Audio is presented with the LPCM mono track, which sounds quite good with no drops, pops, or hisses. Distortion is kept to a minimum and background noise including German dialogue is well-maintained. English subtitles are also included.

For extras, Arrow Video has assembled a new audio commentary from film historian Troy Howarth who, as always, provides some interesting background context about the film. Also new to this Blu-ray are five interviews; Kim Newman provides an appreciation of the film as well as Vonnegut’s literature, while Perry King, Rocky Lang, Robert Crawford, Jr., and Daniel Schweiger touch on production, releasing, lasting impact, and film soundtrack respectively. Also included is the film’s theatrical trailer.

Supplementary bonus features include a new booklet with an essay on the film and novel from Peter Tonguette and reversible cover artwork.

Hill's Slaughterhouse-Five is a solid adaptation of Vonnegut's sci-fi novel, and it has been presented with a great 4k scan that does feature a fairly heavy grain field. Extras are also robust.
Film
Blu-ray
Reader Rating0 Votes
Good
Film manages the book as well as can be expected
Good new 4k scan
Many supplemental features
Bad
Grain scale may be a bit obstructive for some viewers
3.8
Buy
Amazon
Hosting screenshots is expensive. If you want to see more galleries, consider donating!