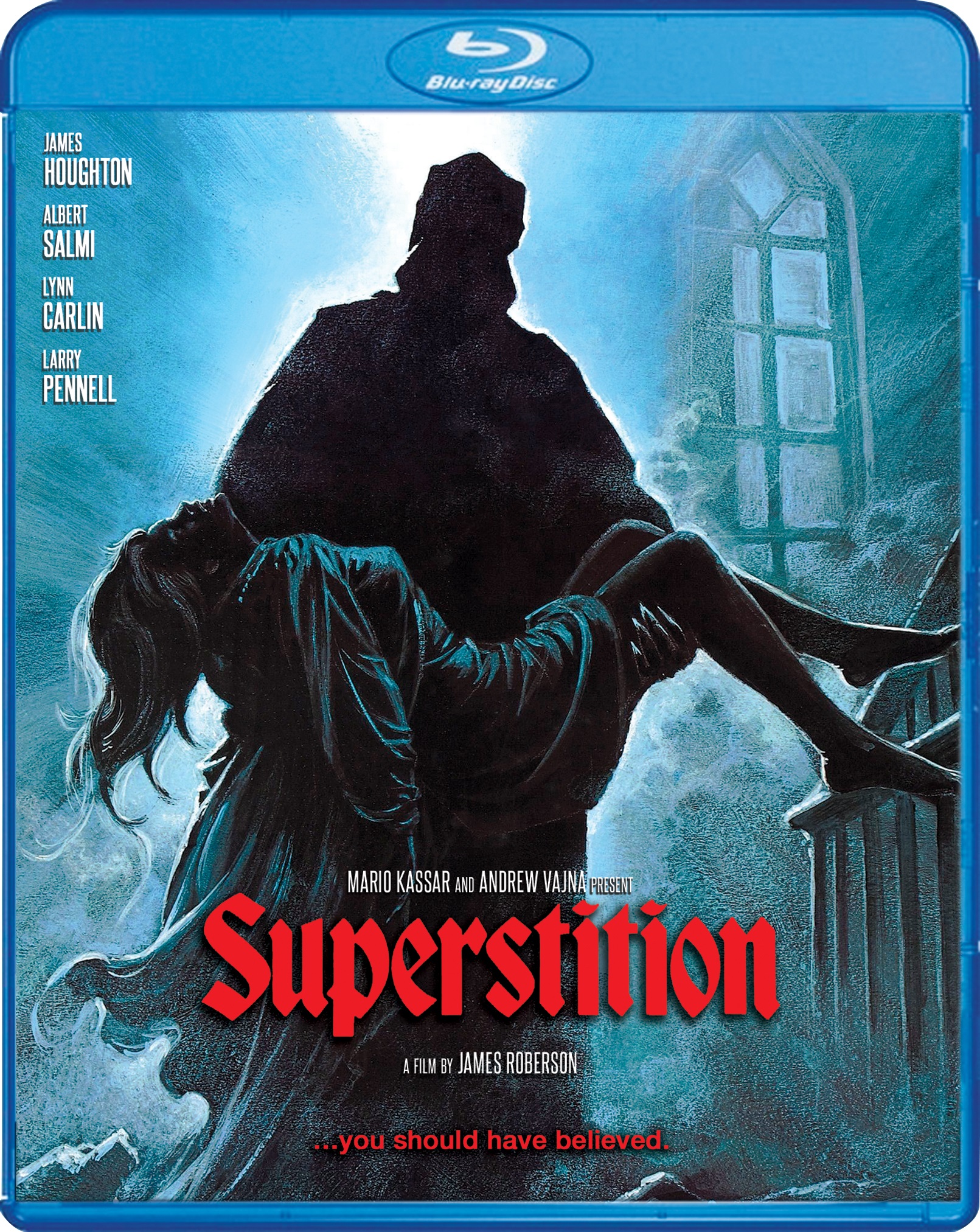 If this many people die in a house, stop letting people move in!

When Scream Factory announced the release of Superstition on Blu-ray, I’ll admit I was very excited based on the fantastic cover alone. Keep scrolling to see what I mean!

I’ve never even heard of the movie before (although, that might not be true as I’m sure in the dark recesses of my mind there is a memory of me seeing the VHS on the shelves at my local video store eons ago), but I knew that from the cover I was going to like this movie. Sure, the flick was probably going to be cheesy with loads of terrible acting, but there would at least be something enjoyable about the movie. Well, folks, you can rest easy knowing the film is quite a bit of fun (surprisingly the acting isn’t that bad either).

The movie starts on the right foot with a couple of gory kill scenes in the first 10 minutes! The premise: a house sits on a piece of land where a witch was drowned centuries ago by the local populace. This witch wasn’t one of those “fake” witches either, as she was very much a dependable employee of the devil himself/herself.

As the years pass, anyone who moves into the house ends up dying in some graphic way, be it a strangling here or spiked to the attic floor over there. Even though people are dying left, right and centre, that doesn’t stop the church, who owns the house, to rent it out to a new priest who is moving in with his family. The family consist of a loyal wife, a dutiful daughter, a rebellious daughter who hates her sad and super depressed father (seriously, this guy doesn’t smile once), and an adventurous son whose adventurous spirit becomes his downfall.

As this ’80s family gets comfortable in the house, with random people dying all around them, the local detective investigates the murders and is placing the blame on the town mute (in the detective’s defence, the town mute doesn’t try to hide his creepiness that much.) The detective teams up with a priest (different priest) as they dig into the history of the house and the witch. However, their investigation skills do nothing to stop the witch – who is dressed in a killer black cloak and spouts wicked fingernails – from killing everyone in gory fashion.

That is the gist of Superstition, without spoiling anything in particular. It’s a classic ’80s horror film, with a basic plot, a boatload of fun kill scenes, and a mean streak when it comes to offing any of the characters (no one is safe in Superstition.) Does it have faults? Of course, which ’80s horror film doesn’t? It has the occasional groan-inducing acting, a few unnecessary scenes, some dumb character decisions, and a couple of the kills could have benefited from being a bit gorier (however, nothing will top that sawblade scene!). None of these negatives, though, is going to stop me from recommending you check it out.

And of course, you are going to be checking it out on Blu-ray from Scream Factory. The Blu is spouting a fancy looking 2K transfer from the original film elements, and the results are excellent across the board. Audio has been provided in DTS-HD Master Audio Mono, which didn’t produce any issues to my partially deaf ears. If you are wondering about extra features, we have a couple of goodies to peruse through. You have a 30-minute interview with director James Roberson, who gives plenty of tidbits about filming Superstition (aka The Witch,) and a 25-minute interview with actor James Houghton who fondly remembers having bright red hair due to a dyeing mishap which forced him to put shoe polish in his hair to darken it. Rounding out the features are a trailer and TV spot.

This is one of the rare times when an ’80s horror movie poster correctly conveys the kind of experience you are going to be having when popping in Superstition. It’s got the gore, the cool-looking killer, and mean streak that more movies need not be afraid of having. Scream Factory presents Superstition on Blu-ray with a solid transfer, and a couple of extra features to enjoy. If the price is right for you, pick it up!