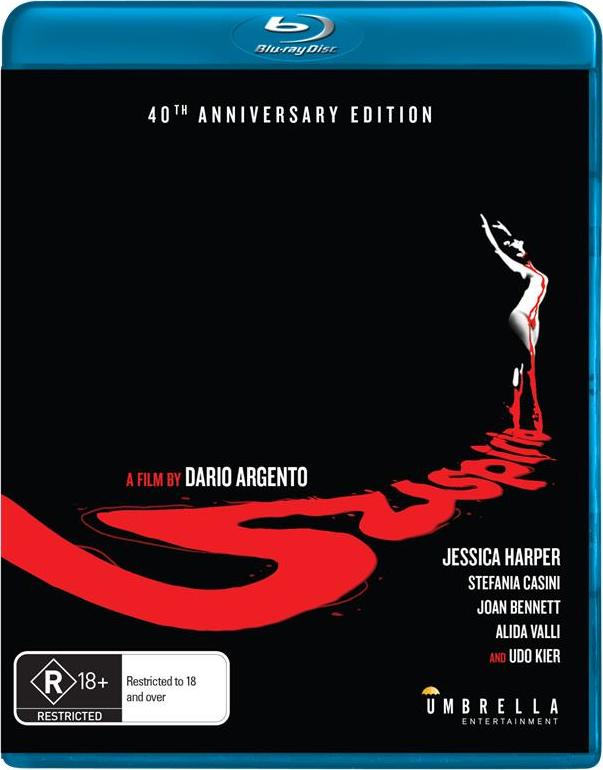 Jessica Harper arrives in a very blue, red and green Germany to go dancing. Sadly, a coven of witches is out to ruin her groovy moves.

Suspiria is arguably Dario Argento’s best work, and the numerous releases help to prove it. If you ask any Argento fan how many copies of Suspiria he or she owns, they are most likely going to say more than one. Because the film is an artistic wonder, with scenes awash in reds, greens, yellows, orange, blue and every other colour, the past releases have had a hard time accurately capturing the way it was meant to be seen. However, that all changes now with the new 4K transfer that has been struck for Suspiria. You’ve probably heard about Synapse Films’ Blu-ray release, which I can bet is a stunner, but I’m not here to talk about that. Instead, I’m here to talk about Umbrella Entertainment’s Blu-ray release. For those out there on a budget, but still want to own Suspiria on Blu-ray with a stunning picture, the Umbrella Entertainment release is the way to go.

If you’re one of the few that haven’t seen Suspiria yet or aren’t aware of what it’s all about, let me break it down for you. Jessica Harper plays Suzy, an American girl attending a prestigious European dance academy. The day she arrives, she notices a fellow student acting strangely and eventually running off into a storm. Suzy thinks nothing of it until she hears about the girl’s death the next day. Unfortunately, this isn’t the only weird thing that happens at the school for poor ol’ Suzy. She falls ill for no apparent reason and is confined to her room for a better part of the week. Maggots inexplicably rain down from the ceiling, a friend of hers disappears, and the talk of a coven of witches is brought up. What exactly is happening at this school? That, my folks, is the mystery that will be unravelled during the 99-minute runtime.

All of this is wrapped up in typical Argento flair and Goblin’s outstanding and highly memorable score. Suspiria is a horror fan’s wet dream, and it’s obvious why it is beloved by many. I can also see why some might not love it as much as others, as it does have a few cheesy moments (S is for Sssssssnakes!!!), but I personally think if you happen to know someone that doesn’t like this movie, leave them.

Suspiria has some crazy murders that range from death by falling glass to fun with razor wire. It can be graphic at times, which is in my opinion pretty awesome.

Suspiria doesn’t have any sex or nudity unless you count nipples poking through tops. There are a ton of beautiful ladies present, but none are willing to show off the goods. Honestly, it doesn’t hurt the film any.

Umbrella Entertainment previously released a Blu-ray of Suspiria back in 2012, but that release can promptly be thrown in the trash. This time around, Umbrella has used the new 4K restoration of the film that was completed by TLEFilms FRPS in Germany and the results are outstanding. Colours are vibrant and I noticed no issues with DNR or sharpening. There are times where the film appears desaturated, but it’s hard to say whether that was how the film always looked. It will definitely be interesting to see how Synapse’s release turns out.

There are going to be people who will not give Umbrella Entertainment’s Blu-ray a chance, as they have already set their sights on the Synapse release, which has used a different 4K master. That’s okay and completely understandable. However, for the people that don’t want to splurge for the big bucks, but still want a freaking stellar release, the Umbrella release is the way to go. It has an absolutely stunning picture. I, unfortunately, can’t say whether it looks as good as the Synapse release, but to me, it was an eyeopener.

The same goes for the audio presentation, with three audio tracks to choose from. You will need to use your remote to select between the three, as there is no option on the menu. The default track is the newly remastered English DTS-HD 5.1 track, and it is orgasm-inducing. Goblin’s score comes through so freaking loud; I was grinning ear to ear. The next track is the older English DTS-HD 5.1 track that was released a couple of years ago. I only listened to it for a bit, and it just didn’t have the same punch volume-wise. The same goes for the Italian track, which is nice to have but not necessary to watch the movie in, as the dubbing for the Italian actors is pretty good, and Jessica Harper speaks English throughout the film.

Special features mainly feature a lot of older extras that were available on past releases. There is a new interview with Dario Argento discussing the 40th Anniversary of Suspiria that runs 28-minutes. Sadly, there are no audio commentaries included on the disc.