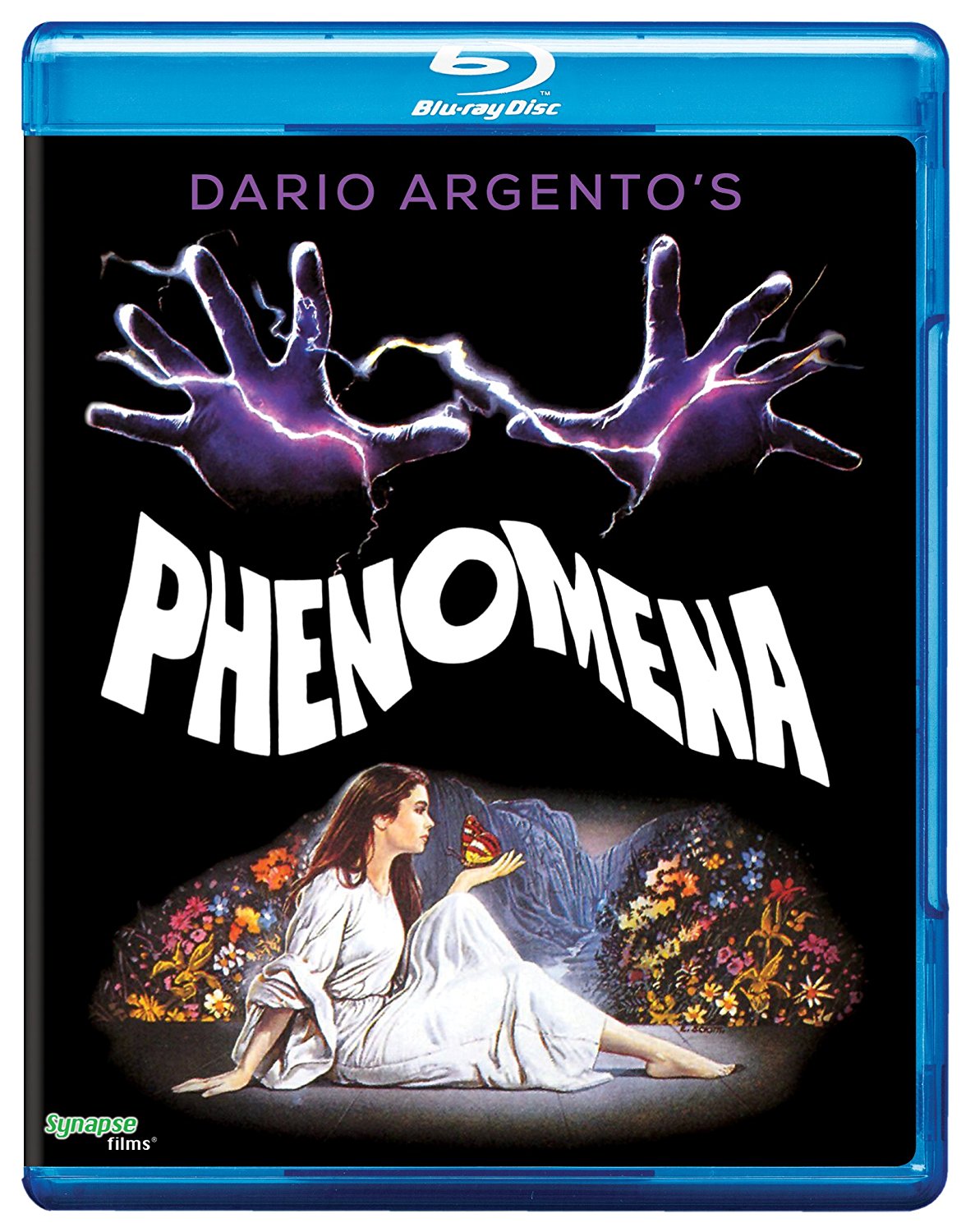 Jennifer is the daughter of the popular actor Paul Corvino, but she’s been sent to an all girls school in the Swiss countryside (called Swiss Transylvania) to spend her time. Unfortunately, it’s the worst time of year for her to go there – not because of the Swiss winds, but because of a brutal killer lurking around the school killing all of Jennifer’s classmates. But Jennifer has a gift – she has a supernatural link with bugs – and working with the local entomologist/doctor/author/chimp owner Dr. McGregor, Jennifer helps track down the killer(s?) because the police clearly don’t have a handle on it.

Note: this is a review of Synapse Films’ two-disc Blu-Ray, not the extensive steelbook version. The original 116 minute cut of the film is the subject of this review,

Phenomena‘s title truly does encapsulate the scope of Dario Argento’s giallo film following seminal works Tenebrae, Suspiria, and The Cat o’ Nine Tails. His works were always strange and in some ways psychedelic, but Phenomena (or Creepers in the US) crosses the line from giallo realism into something far different, both less believable and crazier than some of the more stoically-rooted Italian horror slashers. Employing a very young Jennifer Connelly and an aging Donald Pleasance, the film follows a string of violent murders at a school for girls, told through the perspective of a woman who can emotionally connect with insects. And that’s not even the half of it.

Argento’s opening moments are very reminiscent of Suspiria and Inferno despite Phenomena not being a part of the Mother trilogy: Jennifer (Connelly) heads to a strange all-girls school, encounters a ferocious headmistress, and deals with bullying due to her strange characteristics. It features beautiful setpieces, interesting cinematography choices, and has the fortune of relying on the Swiss countryside setting for its lush colorful backdrop. Even Phenomena‘s opening murder sequence feels like a replay of some of his other works, setting the tone for a relatively familiar giallo feature about an unseen killer murdering women in obscenely beautiful ways.

But Phenomena quickly transitions away from the norm. Donald Pleasance’s character Dr. McGregor keeps a monkey as a nurse for Christ’s sake! Argento shares this character’s obsession with entomology, giving Jennifer a paranormal connection to insects that allows her to experience certain things, whether it be their fear or a sort of second sight that allows her to see the murders taking place. The traditional giallo elements fall away, and Argento is actually not too concerned about the act of killing; rather, his emphasis is on Jennifer and her detective abilities as she begins to search for the killer using a specific type of fly as her guide.

The wacky elements are both exciting and a flaw within Phenomena. They certainly add elements to the story that most viewers would never see coming – like a monkey randomly finding a straight razor and then coming to our heroine’s rescue – and a fun, supernatural layer to an otherwise generic plot about a woman killer. However, Argento seems to be using them as a crutch here; his stylish, often beautiful kill scenes are nowhere to be found besides the aforementioned first encounter, and the film’s lengthy running time feels unnecessary when much of it is exposition between Jennifer and McGregor. While Creepers‘ cut is definitely not the best, it does hint at the editing Phenomena should have received to cut down its two hour running time.

The other element that Phenomena lacks is a satisfying killer motive. In this film, Argento gives us two murderers, one of whom feels inspired by Friday the 13th. The random aspect of the killer reveal means there’s no way that the audience can ever figure out the killer’s identity before this point, and that seems like a cop-out; I like to feel like I could have pieced things together had I looked at the clues more closely, but Phenomena doesn’t give enough information to figure anything out. Ultimately, the killers are too overlooked, leading to this lackluster conclusion and the missing stylish kills from some of Argento’s other works.

But Phenomena is just weird enough to attract people despite being in outlier in Argento’s early career. It doesn’t have the visual or storytelling appeal of his more successful works, but those looking for a bonkers plot will enjoy Argento’s willingness to go to odd places. The film also has some excellent moments where it juxtaposes the beauty of the Swiss countryside with the griminess of its killers, leading to a Poltergeist-inspired scene that ensures the viewer will need a shower after. In short, Phenomena isn’t Argento’s best work but it is one of his most inspired and creative.

In a lot of ways, this is a relatively tame film in comparison to Argento’s filmography. It still has a couple of good slashings, like the opening scene where Argento films his daughter Fiore’s death in vividness. Also, this isn’t the film for anyone who doesn’t like maggots, because there are a lot of them throughout.

Sadly, there is none besides a quick scene of Jennifer’s roommate taking her top off with her back facing the camera. There’s a short moment of shadowed breast, but nothing else of note here besides some grotesque making out.

Synapse Films’ two-disc Blu-Ray features three different cuts of Phenomena. On the first disc, the original 116 minute cut and the truncated American version Creepers (82 minutes) are included, and the second disc houses the 110 minute cut with which most are familiar. All three have had a high-definition transfer that looks excellent, presented in 1.66:1 aspect ratio. The colors are lush (especially those opening shots of the Swiss countryside, with an awesome green), the film grain is present but kept to a minimum, and there’s no blurring during the speedy transition shots and POV movements Argento uses throughout. Only one scene shows some problematic quality, when Fiore Argento crashes through the window during the first murder. Otherwise, this is a beautiful Blu-Ray. The only thing to damper this excellent video quality is Arrow Video’s 4k transfer, which offers slightly more clarity. However, that’s a UK-only release, so fans who don’t want to export will still be getting excellent PQ.

This two disc set includes three different versions of the film, and the audio adds even more options for the viewer. Viewers can watch the English dub with multi-language tracks, or view it with Italian dub audio (the film was shot in English). Both tracks are good, with no issues, although I’ll be honest and say I prefer the English dub because of Donald Pleasance alone.

The 110 minute version of Phenomena on the second disc gets two different audio options: either the original 2.0 stereo mix, or an alternate mix with different music cues and sound effects. While the variation is nice, the original 2.0 mix is far superior – the vocals are louder, the music more dynamic, whereas the alternate mix generally sounds muffled.

Synapse Films is marketing this Blu-Ray specifically for the three features; if you’re looking for a lot of extras, then you should have gotten the limited edition steelbook instead. Besides the three versions of the film, the audio and subtitle features, and the reversible cover art for Creepers, the selections for extras are limited. There’s a full length feature documentary called Dario Argento’s World of Horror presented in standard definition, a short four minute vintage interview with Andi Sex Gang, and a lot of trailers including the ones for Phenomena and Creepers, plus radio spots. There’s also an audio commentary featuring author Derek Botelho and journalist David Del Valle.

While this is not the same as the steelbook version, it basically has most of the same features besides the CD soundtrack. That means that this is perfect for someone who really only cares about the film itself, especially owning the three different versions and not wanting to pony up the cash for the Arrow Video release. Fans looking to own Phenomena on Blu-Ray won’t go wrong picking up this cheaper alternative.