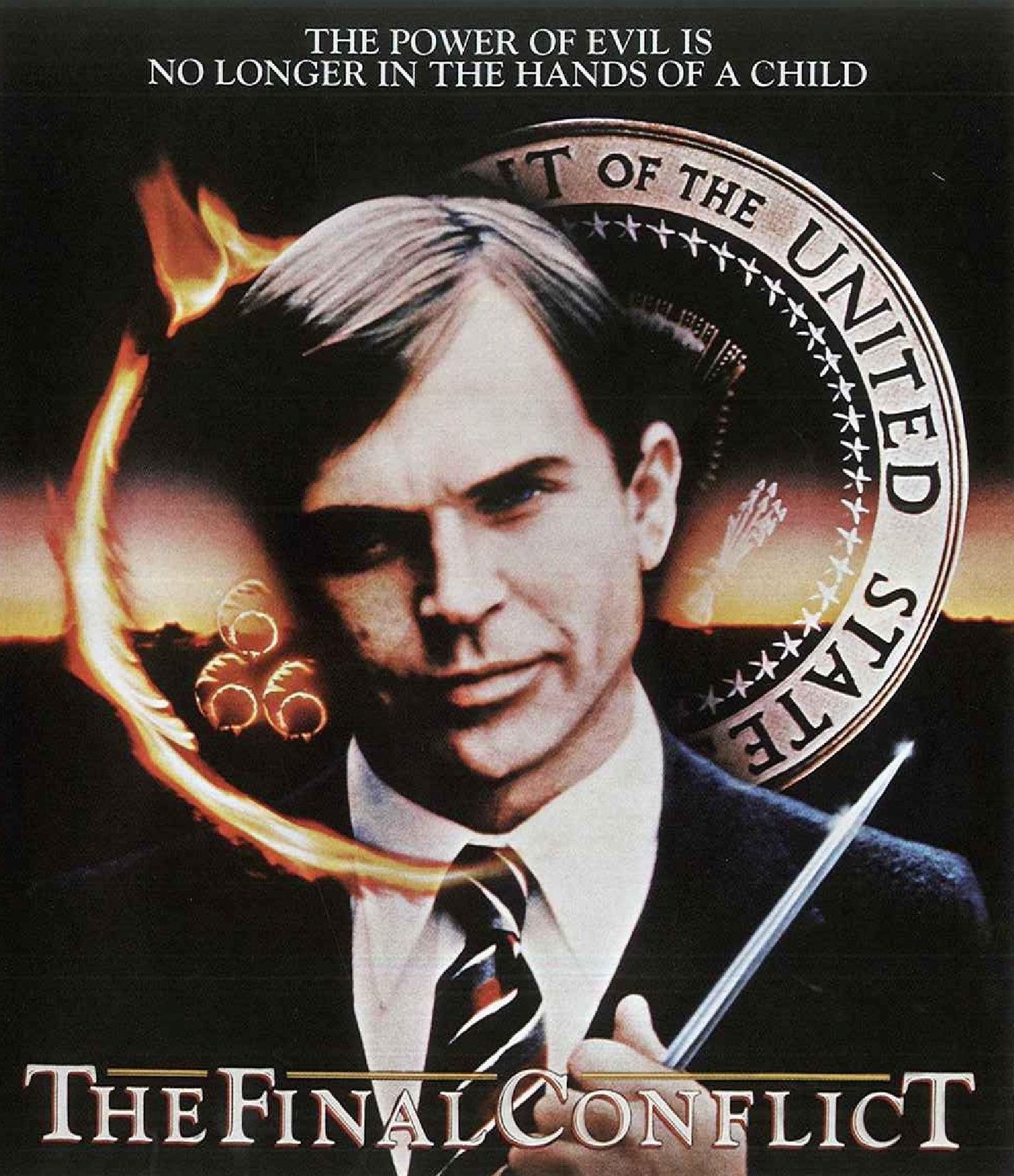 Moving up the corporate ladder because you're the Antichrist... and rich too

The Final Conflict is one of the best films in the Omen series and Scream Factory has done a fine job with this release as part of the Omen Collection, with three new interviews and a new audio commentary along with a previously-existing HD transfer.
Film
Blu-ray
Reader Rating0 Votes
Good
Solid film
Three new interviews
Bad
No new transfer
4
Buy
Amazon

Damien Thorn quickly grew up between the release of Damien: Omen II (1978) and the subsequent The Final Conflict (1981), transitioning from child of the owner of the Thorn Corporation to the owner, along with the President’s right-hand man as Ambassador of Great Britain. Sam Neill stars as the Antichrist himself, who has pretty much garnered himself a following in the upper echelons of business thanks to his assistant Harvey Dean (Don Gordon) and a number of disciples who worship his every whim. In The Final Conflict, a group of monks hoping to usher in the birth of the Messiah band together to stab Damien with the daggers of Megiddo, while Damien himself gathers a different group to murder the Messiah. It’s a blasphemous good time.

In the previous review of Damien: Omen II, I mentioned that the Thorn Corporation takes up an exorbitant amount of the film’s time. Here, director Graham Baker seems to have learned from those mistakes, opting to use Thorn Corporation and Damien’s Ambassadorship as context rather than the main substance of the plot. It helps to explain Damien’s cult following without overwhelming the viewer with business talk. It also shows how wide a grip Damien has on those around him.

So it makes more sense when most people, including that aforementioned group of monks, knows enough about him to want to murder him in various half-brained schemes. Part of The Final Conflict‘s best moments occur because of this tete a tete, which mostly involve these monks dying in elaborate setpieces like being set aflame while swinging through a television studio or being devoured by ravenous bloodhounds. The Final Conflict isn’t so much gruesome as it is deliciously evil, and it leaves a lot of that to the viewer’s imagination. The baby-killing sequences aren’t graphic but they’re still brutal with what they don’t show – giving The Final Conflict a dark streak that works rather well.

The end of the film is a little messy, but ultimately Baker handles the whole thing well by couching the storyline in verse from the Bible with these references appearing as cards onscreen. Using Revelations as inspiration, the movie ends with Damien getting his comeuppance but promising that the Nazarene has not won the battle, hinting at further sequels that – besides Omen IV: The Awakening that we won’t really include – would never come. It’s unfortunate, because The Final Conflict shows a lot of promise, especially being the third film in the series and following the mostly flat Damien.

Overall, this film certainly bests its predecessor and gives viewers a very interesting look at the adult Damien. Neill gives a good performance and this is a brutal beast too, with many shocking sequences to balance out its happier ending.

The Final Conflict is included in Scream Factory’s new The Omen Collection boxset which collects all of the films in the series. We will post a recap review for all movies when they have been completed.

Scream Factory presents The Final Conflict with a previously-released HD transfer that looks quite similar to the previous 20th Century Fox release – though it does lose some detail on the sides due to the previous release’s improper aspect ratio. This transfer is, like Damien: Omen II, not a bad one though a new 2k or 4k transfer would have been nice for this release. Detail is fairly good, though occasionally the grain can be quite heavy and obstructive. Blacks are well-managed though lose some of their depth and detail, especially during Damien’s sex scene. Otherwise, there’s nothing wrong with this transfer and those that don’t already own the previous Blu-ray should be happy with this.

The Final Conflict collects three new interviews for this disc: one with director Graham Baker, another with Andrew Birkin, and the final one with Jeanne Ferbe, production assistant. Each are pretty in-depth at around 20 minutes apiece giving some good info behind the scenes of the film. Also included is a new audio commentary from special project consultant Michael Bosco who provided all previous commentaries.

Older features like trailer, TV spots, a still gallery, and an older audio commentary from director Graham Baker are provided.