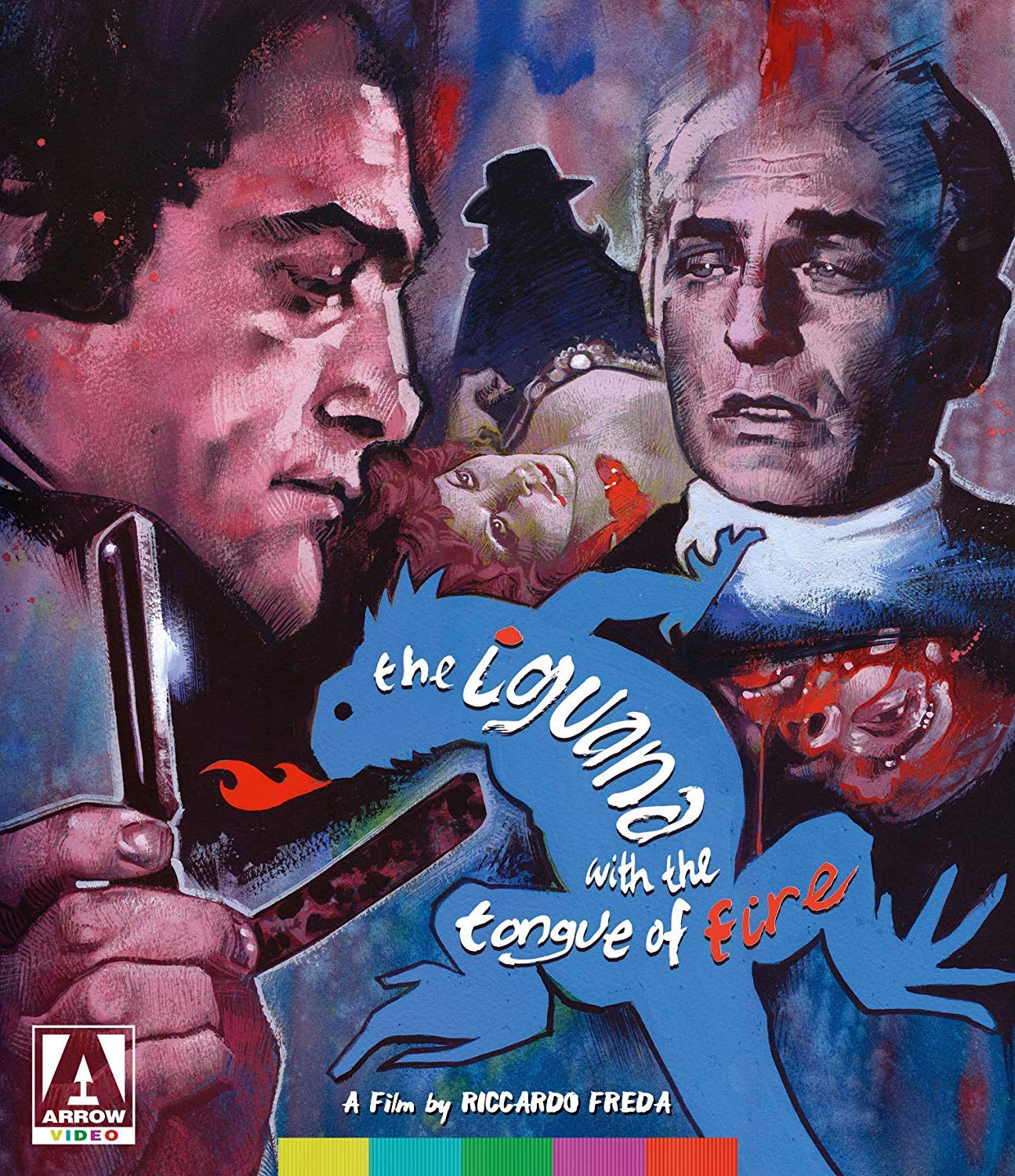 But sir, I think you mean chameleon.

It's nonsensical, absurd and downright bizarre, but The Iguana with the Tongue Fire is above all fun to watch. Arrow Video releases a Blu-ray that once again is worth picking up.
Film
Blu-ray
Reader Rating0 Votes
4.2

Like most gialli in the ’70s, The Iguana with the Tongue of Fire was looking to capture some of the success of The Bird with the Crystal Plumage. Unfortunately, throwing an animal, or in this case, a lizard, in your title isn’t going to be a guaranteed win in terms of box office take. You need to have a story that will capture the audience, reeling them in slowly as to who is doing the killing and why. A few red herrings here and there are the bread and butter of a giallo, but in a case like The Iguana with the Tongue of Fire, the eighth herring in the span of only 20-minutes is enough to elevate this film to parody level.

The Iguana with the Tongue of Fire is directed by Riccardo Freda, who was so upset with the film he had his name credited as Willy Pareto, which I assume is the Italian brother of Alan Smithee. It stars Luigi Pistilli, who has been featured in several credible Italian slashers, such as A Bay of Blood and Your Vice is a Locked Room and Only I Have the Key. Pistilli plays Irish ex-Inspector Norton, who becomes roped up in a murder investigation in Dublin where the killer is dousing people’s faces in acid before cutting their throats; all shown in gloriously gory detail. As Norton dives deeper into the murders, he begins to fall for Helen, the stepdaughter to one of the several suspects, an Ambassador who claims diplomatic immunity to any of the murders. Helen is played by the stunningly gorgeous Dagmar Lassander (my new giallo crush). As the bodies pile up, the viewer is led on a journey that ends with way more questions than answers.

Most of what makes The Iguana with the Tongue of Fire a bad movie is actually what makes the film fun to watch. As Richard Dyer implies on the roughly 20-minute interview included on the Arrow Video Blu-ray, we are no more aware of what happened in the film at the end than we were at the beginning. Whereas Dyer found the film dull, which made the absurdity harder to enjoy, I, on the other hand, thought it was the main thing that gets you through the movie still smiling, next to Dagmar Lassander of course. Another positive for the film is the fact it doesn’t play when it comes to some rather gruesome scenes, especially near the end where Inspector Norton’s family is attacked in an extended sequence that is rather brutal.

Speaking of the Arrow Video Blu-ray, we are given a stellar new 2K restoration from the original 35mm camera negative, and the results are fantastic. As you can see in our extensive gallery, the film has nice even grain that is never overabundant, especially during night scenes. The colour red pops in this one! Audio is provided in both original English and Italian, with the titles and credits provided to you in both languages. It needs to be pointed out that the transfer between the Italian and English sections are different (please see photos for examples). There isn’t much information provided as to why the transfer differs, which is unfortunate. English subtitles are provided.

Information on the new 2K transfer straight from Arrow Video:

The Iguana with the Tongue of Fire (L’iguana dalla lingua di fuoco) is presented in its original aspect ratio of 1.85:1 with Italian and English mono audio. Scanning and restoration work was completed at L’Immagine Ritrovata, Bologna. The original 35mm camera negative was scanned in 2K resolution on a pin-registered Arriscan. Thousands of instances of dirt, debris, scratches, picture instability and other instances of film wear were repaired or removed through a combination of digital restoration tools and techniques.

The mono Italian and English language tracks were remastered from the optical sound negatives. The audio synch will appear slightly loose against the picture, due to the fact that the dialogue was recorded entirely in post-production, as per the production standards of the period.

All original materials used in this restoration were accessed from Movietime.

Bonus Features consist of the previously mentioned Richard Dyer interview, a new 26-minute interview with DJ and soundtrack collector Lovely Jon, who discusses the score by Stelvio Cipriani, specifically three distinct scenes. We have a 21-minute interview with editor Bruno Micheli, who speaks in Italian, but English subtitles have been provided. Also provided is the lovely Dagmar Lassander discussing her career for 20-minutes. Rounding everything out is a new commentary with giallo connoisseurs Adrian J. Smith and David Flint, English and Italian trailers, and an image gallery. As usual, we get a lovely booklet with an essay by Andreas Ehrenreich, a contemporary review from 1971, and photos; and for the Blu-ray itself, newly commissioned artwork by Graham Humphreys.

It’s nonsensical, absurd and downright bizarre, but The Iguana with the Tongue Fire is above all fun to watch. It features brutal death scenes, the gorgeous Dagmar Lassander, and a plot that serves up more red herrings than pretty much any other giallo out there. Arrow Video has offered up a marvelous Blu-ray, with a solid video transfer and plenty of extra features.

CHECK OUT
Extensive NSFW screenshots of this Blu-ray.
Hosting screenshots is expensive. If you want to see more galleries, consider donating!