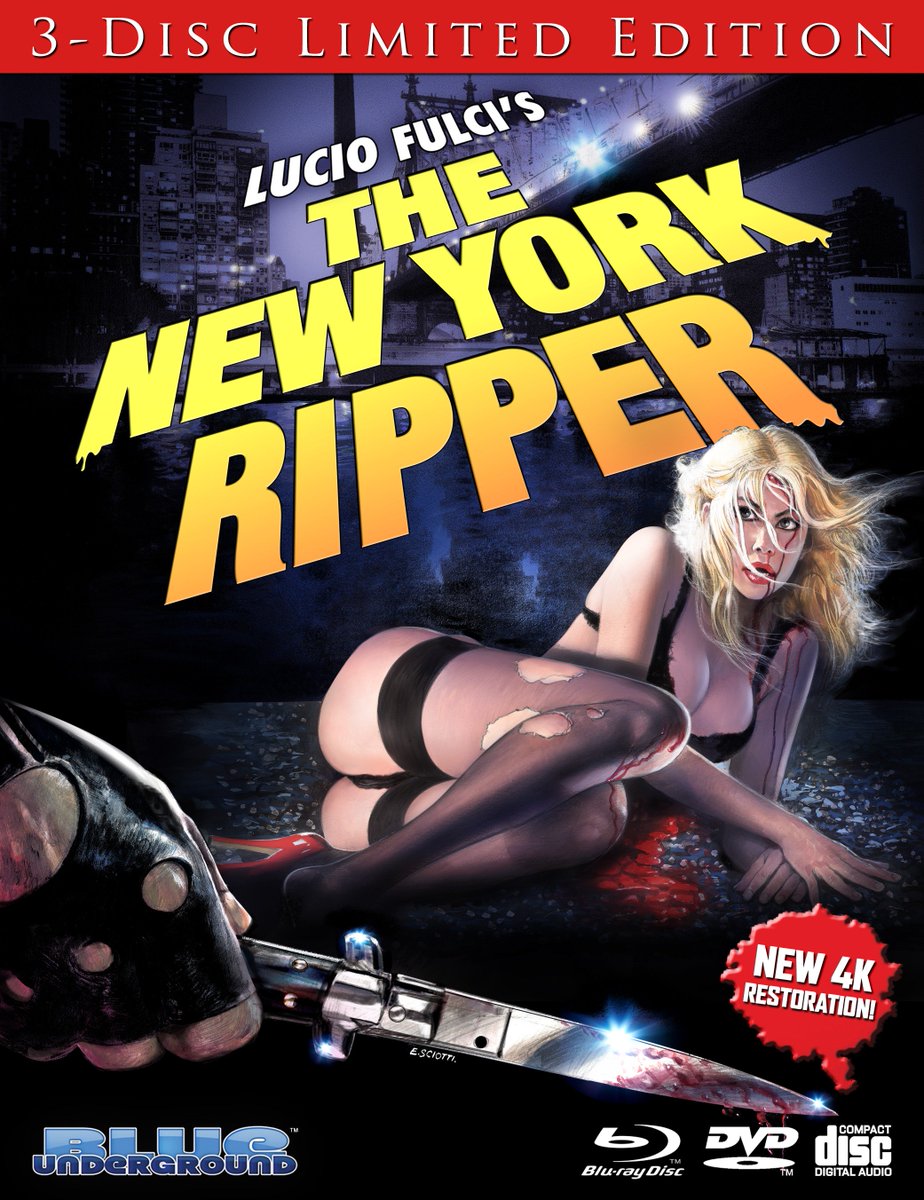 Can a duck be misogynist?

The New York Ripper is grimy, rough stuff, but it is also definitely a must-watch. Blue Underground has given this the definitive release by one-upping their own previous Blu-ray with new 4k scan and a ton of new features.
Film
Blu-ray
Reader Rating1 Vote
4.5
Buy
Amazon

The New York Ripper may be one of Lucio Fulci’s most infamous films. It’s a gritty giallo, a horror film with a darkness to it that occasionally permeates into slashers but is mostly overridden by ridiculous setups. It has also had multiple accusations of misogyny, a partial symptom of Fulci’s real-world problems that have crept into the context of the movie despite specific examples of the film not siding with its killer. There’s no denying that The New York Ripper is brutal towards the fairer sex, but it also offers a look at the – ahem – seedier side of New York during this era that certainly highlights a larger societal turn towards voyeurism, fetish, and more open sexuality; in doing so, it criticizes what that means for the 42nd Street crowd and, likewise, the film’s viewers too. Clearly we’ve sought out a dirty little film, and we’re meant to be punished too.

Fulci and his writing staff – including Gianfranco Clerici, Vincenzo Mannino, and Dardano Sacchetti – set the stage with an opening vicious murder; the unseen killer, with us in his POV, is a quacking quasi-genius who targets lovely young ladies and prostitutes by ripping them up savagely mostly with sexual violence. He also toys with our aging, inept detective Fred Williams (Jack Hedley) in a cat-and-mouse game that shows how profoundly bad Williams is at his job. Also at play is Fay (Almanta Suska), who narrowly escapes the killer’s knife albeit with a nasty thigh cut. Towards the end, all is revealed in a downbeat ending with a psychological profile of the killer espoused by Dr. Paul Davis (Paolo Malco), who also shows how terrible of a profiler he is.

The New York Ripper is a giallo and, like most, has a fairly long lead-up. While I can’t say it’s particularly boring, the film certainly has a slower pace that might throw off some viewers – especially those looking for the famed grit and violence. The pacing, though, is somewhat required due to the various plotlines happening in the film. Fulci presents Alexandra Delli Colli as a sexy exhibitionist into humiliation and BDSM play as a sort of main character stand-in through much of the film, only to surprise audiences with her brutal demise later on to allow Fay to take center stage. At the same time, Fulci spends quite a few scenes documenting the morality of Detective Williams, who is not only a bad cop but an overall poor person who judges people for their bedroom antics. For the most part, no one looks good here besides perhaps Fay – and that’s entirely the point.

Critics – including our own Basie in a previous Cult Throwback review of the film – have often decried The New York Ripper as a morally inept movie. It has a lot of gratuitous violence against women, making most into an artistic statement in Argento-esque fashion. It seems to shun sex workers and promiscuity, and it has a cringe-inducing statement about gay people when it randomly shows Dr. Davis buying a gay porno mag as though this is meant as some sort of red herring. All of these things are problematic, some more than others, but ultimately Fulci’s finale does not side with his killer. The duck quacking and clearly demented nature of our murderer indicates that Fulci does not want the audience to find any sympathy in what he’s doing, and more so the final tragic shot is a critical indictment of the killer’s motivations – instead of being with his daughter in her final moments, he’s out murdering women in her honor. Sure, The New York Ripper has misogyny – but it’s from the killer’s perspective, with the audience meant to see the error of those ways even in its graphic depiction.

The New York Ripper may be one of Fulci’s best films, a garish display of grimy NYC reality in the ’80s spiced with a memorable killer and some excellent cinematic set pieces. It doesn’t devolve into inanity like some of his others (Manhattan Baby, The House by the Cemetery), and in its own way manages a good psychological profile of its serial slasher. Look past some of the contextual criticisms and you just might find a diamond in all of its roughness.

Blue Underground has once again gone back to the drawing board with their release of The New York Ripper; they previously released a Blu-ray, but this time they have opted for a new 4k scan of the original camera negative. The results are fantastic, much like their previous Zombie and Maniac 4k scans. Grain has been maintained but is not omnipresent or “streaky” as it could be on the previous release. Colors are incredibly pronounced with deep blues, verdant greens in outdoor shots, and lurid lighting in the excellent Zora Kerova death sequence. I have seen a few criticisms that the color contrast looks a bit boosted, but looking at previous screenshots I don’t find that to be a major problem here, and the color grading reveals more nuance especially in darker scenes. Depth and detail is at an all-time high and Blue Underground have done an excellent job on this release despite a fairly good picture on their previous Blu-ray.

Blue Underground has provided a lot of audio options for this release too. They include the DTS-HD MA 7.1 English track that was offered on the previous Blu-ray, which sounds quite good with clear dialogue and bombastic music score supplying the brunt of the satellite sound. Also included are both English and Italian 1.0 DTS-HD MA tracks – both sound good, and ultimately the dubbing is good enough on the English to skip the Italian entirely. Also available are lossy French and Spanish tracks. Subtitles include English for both the English and Italian tracks, French, and Spanish.

Besides the 4k scan, the biggest upgrade to this new limited edition release is the impressive number of extras. The release comes with a lenticular slipcover, an interior cover that features the same artwork but with NSFW flair, reversible artwork, a DVD disc, and a CD of the soundtrack. Also included is an essay from Travis Crawford.

On the disc itself, we get a new audio commentary with critic Troy Howarth – on his game as ever. A number of interviews are featured as well. Dardano Sacchetti talks about the rewrite process (basically inserting some of his more violent scenes into the already written draft or changing things they couldn’t shoot), and he discusses his turbulent relationship with Fulci. Howard Ross describes his prosthetics and getting turned on in his peep show scenes. Cinzia de Ponti discusses filming in New York, her morgue scene, and more. Zora Kerova has one new interview and also the previous interview from the other Blu-ray release; both are relatively similar and she talks about shooting her live sex scene and its awkwardness. Stephen Thrower gives a critical and contextual overview of Fulci’s film and praises its overall theme. Enzo Sciotti, responsible for original poster artwork and the new art for this release, discusses his past works and how he creates his posters.

Finally, the older feature NYC Locations Then and Now looks at how NYC has changed since The New York Ripper was filmed. A theatrical trailer is also included, as well as poster and still art galleries.

This is the most extensive release of The New York Ripper yet and Blue Underground has outdone themselves. Even if the 4k scan doesn’t seem enough to upgrade, the addition of about an hour and a half of bonus features should give enough incentive to pick up this limited edition, and that’s not counting the included CD. You can’t go wrong with this, so hit the streets of New York and pick it up.