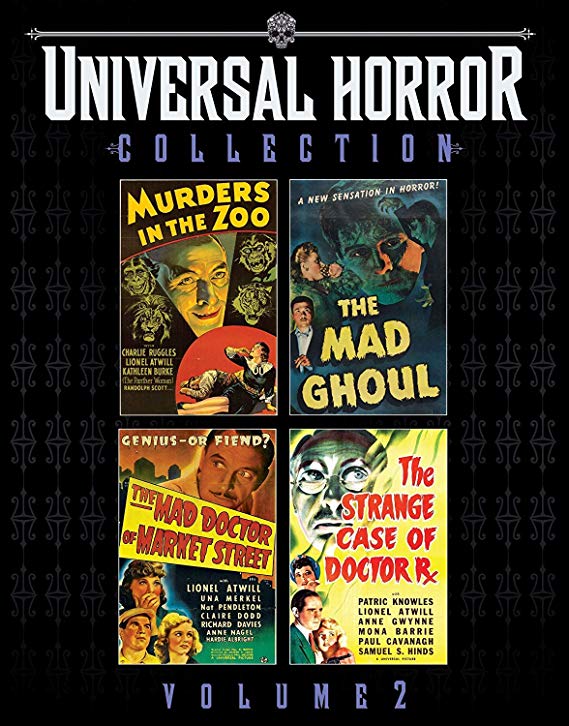 Universal Horror Collection Volume 2 does not have the stellar films that the first collection had, but they are good enough to warrant picking up this collection of good-to-mediocre horror flicks with a limited amount of new extras.
Murders in the Zoo
The Mad Doctor of Market Street
The Strange Case of Doctor Rx
Black Friday
Blu-ray
Reader Rating0 Votes
3
Buy
Amazon

We posted reviews of all of the Universal Horror Collection movies as their own separate posts, but for those looking for a really quick TL;DR of the entire set, here’s a rundown of each disc and then a full aggregate score of the collection.

Be sure to check out our gallery of all the films. Each individual review has also been linked in the title of the film.

Murders in the Zoo

Murders in the Zoo is a surprisingly effective Universal horror film with a particularly bleak storyline. However, its inclusion in this collection is a bit problematic with the lack of great transfer and limited extra features.

The Mad Doctor of Market Street

The Mad Doctor of Market Street is a low-effort Universal horror film and it shows with a particularly bland storyline. This disc has a good transfer with a lack of extras, which is understandable considering the film quality.

The Strange Case of Doctor Rx

The Strange Case of Doctor Rx is a fairly good horror/noir hybrid with a hearty dose of comedy thrown in. Scream Factory’s transfer is unremarkable, but there’s a nice extra feature about Lionel Atwill’s body of work.

The Mad Ghoul is a fine, but not particularly impressive, zombie-like film that steals a lot from White Zombie before it. This Scream Factory disc has a solid transfer and a new audio commentary to add to this collection’s extras.
Hosting screenshots is expensive. If you want to see more galleries, consider donating!