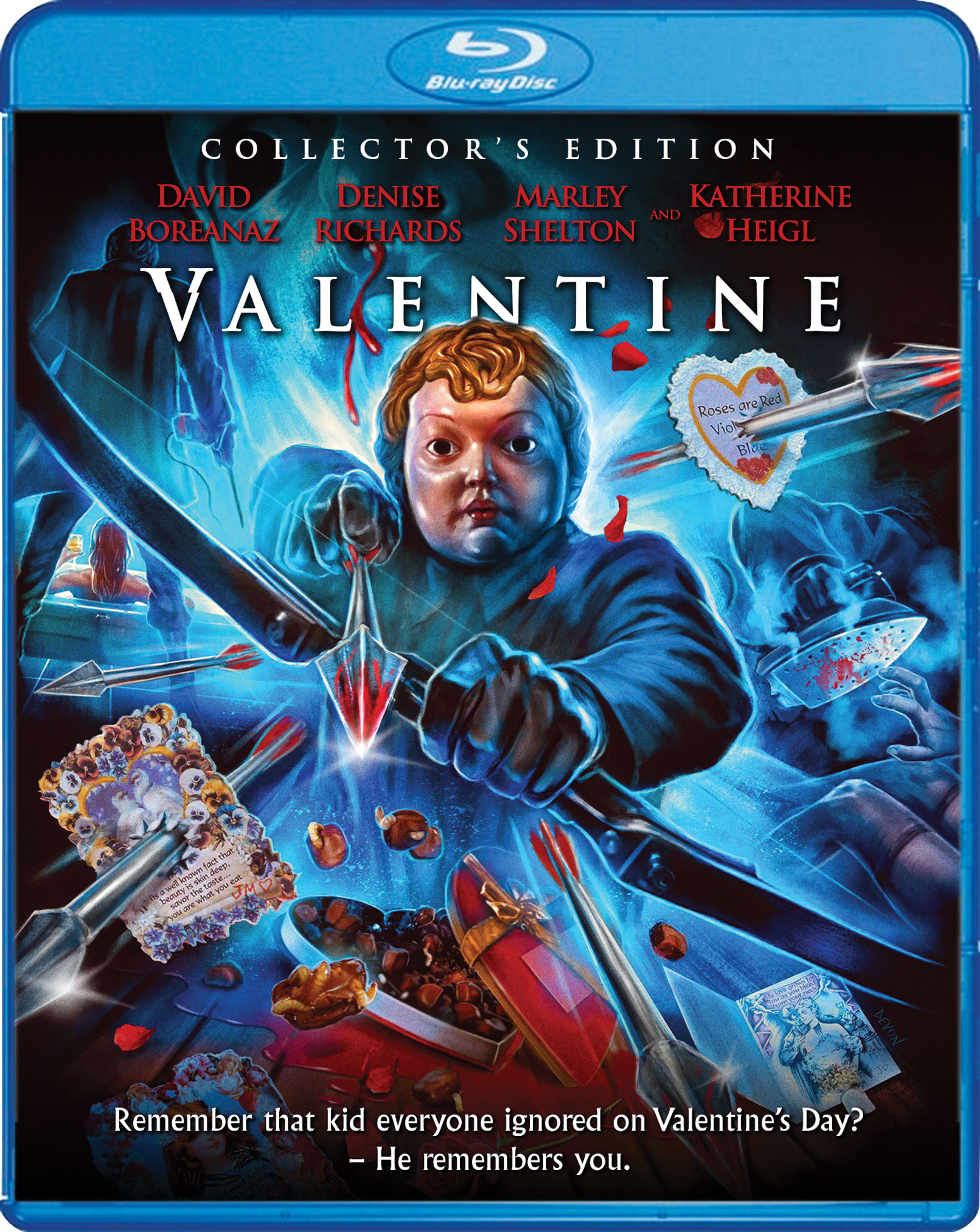 Roses are red, violets are blue... is buying this Valentine Blu-ray worth it to you?

Valentine is a unique take on the holiday slasher film with some inventive kills and a fun premise. Scream Factory does an excellent job with this Collector's Edition, including a nice new 2k scan and hours of new features.
Film
Blu-ray
Reader Rating1 Vote
4.5
Buy
Amazon

Jamie Blanks hit it big in 1998 with Urban Legend, a slasher film that benefited from Scream‘s success but managed to find its own niche with a creative plot about mythic demises. In 2001, he explored yet another serial killer film, this time adopting the holiday elements of ’80s slashers and taking more than a little inspiration from My Bloody Valentine with his own love letter, Valentine. The film boasts a dynamic cast including Denise Richards, Marley Shelton, David Boreanaz, Katherine Heigl, and Jessica Cauffiel (post-Urban Legends: Final Cut), all of them targeted by a Cupid-masked killer who’s driven by rage after humiliation at a school Valentine’s Day dance that subsequently labeled him as a molester and got him sent away.

The group of friends are immediately Blanks’ first priority, with the film focusing on each of them in kind after the flashback introduction and first brutal killing of Heigl. Paige (Richards) is the group flirt, someone who edges near mean girl qualities but is much more personable; Kate (Shelton) is the most mild-natured of the bunch and the eventual final girl, looking to reconcile her relationship with Adam (Boreanaz) despite his drinking and anger problems; Dorothy (Capshaw) is the rich girl of the group and the one most tortured by her past after lying about her forced kiss with the killer; Lily (Cauffiel) is the most happy-go-lucky but still plagued by pervy boy troubles. Valentine‘s focus on its strong female characters and their current love problems helps juxtapose their earlier selves in the flashback sequences, and it helps that the audience truly likes them – it makes the Cupid killer’s stalking even more vicious, because it’s clear they’re not the same women they once were.

But Valentine has another thing going for it that makes it stands out from other slashers of the period too: its atmosphere. The Valentine’s Day elements add a number of intriguing elements to the film, including eerie valentine paper cards, bright pink and purple lighting, an odd art collection of sexual imagery, and a couple of fun Cupid related-kill scenes. Like Blanks’ Urban Legend, Valentine is a collection of unique ideas punctuated by visceral creative murders. The plot, too, keeps things nicely simple – Blanks gives viewers the motive and even the name of the killer, but his identity is kept hidden until the final scene. It’s a good way to keep viewers guessing despite the limited number of players.

While Valentine certainly shows its age at times – the various appearances of nu-metal music, its dated speed dating references – it’s one of the better slasher films to come out of the late ’90s and early 2000s, with a stellar cast, some tongue-in-cheek references (that “angel” wink), and some particularly violent on-screen kills. And Blanks’ nod to the holiday horrors of the original slasher craze is another great nod to the meta canon.

Scream Factory has given Valentine the full Collector’s Edition treatment with this new Blu-ray, and much like their previous Urban Legend release, they were able to get a lot of major cast members back for this new edition. The Blu-ray presents the film with a new 2k scan of original film elements (not specifying what those are) supervised by Blanks and director of photography Rick Bota. For the most part, the picture quality looks great, with very little flaws or damage. Color contrast, though, stands out a bit; it seems that the low contrast is intended to make some of the pinks, purples, and reds pop, but it also means that some of the scenes appear a bit too shadowy (note the final scene, where some of the detail is lost in darkness). Still, overall I’m pretty happy with the way this scan looks and, as stated before, the specific Valentine’s Day colors are very accentuated.

Audio is presented in 5.1 DTS-HD Master Audio, and it has a pretty dynamic soundtrack. There is some occasional muffled dialogue. English subtitles are included.

Scream has really done a great service to fans by providing six new interviews with cast and crew for this release, totaling about 90 minutes. These are all provided separately rather than in a making-of documentary, and Denise Richards, Marley Shelton, and Jessica Cauffiel all return to discuss their memories of being on-set and working on Valentine, and all of them seem to have had a great time; Richards recalls her excellent death sequence, and Cauffiel talks about the cult of fans who are obsessed with her arrow murder. A new discussion with screenwriters Gretchen J. Berg and Aaron Harberts sheds light on the writing process for the movie. Editor Steve Mirkovich talks about cutting the film and his happiness with some of the brutality of the movie. Composer Don Davis discusses how he approached scoring the film, not giving each character a theme but instead working with the scene itself.

The other big addition to this release is a behind-the-scenes featurette that includes about 2 hours of content from Jamie Blanks’ personal archive. While I can’t imagine many people sitting through all 2 hours, it’s a nice look back at footage from making the film.

Other bonus features are ported from previously existing releases, including a music video, still gallery, TV spots, teaser and theatrical trailer, an 8 minute making-of featurette, a press kit, and deleted scenes with “extended death scenes.” These extended death scenes do include the additional gore that was said to be cut from the theatrical release, they are very minor additions. Reversible cover art with the original poster is included as well.

Overall this is an impressive release from Scream Factory that rivals their previous Urban Legend Collector’s Edition. The new 2k scan looks quite good and the amount of extra interviews included on this disc makes it worth a pick-up for any slasher fan, and even those that were unsure of Valentine‘s quality on first watch should revisit with this release.