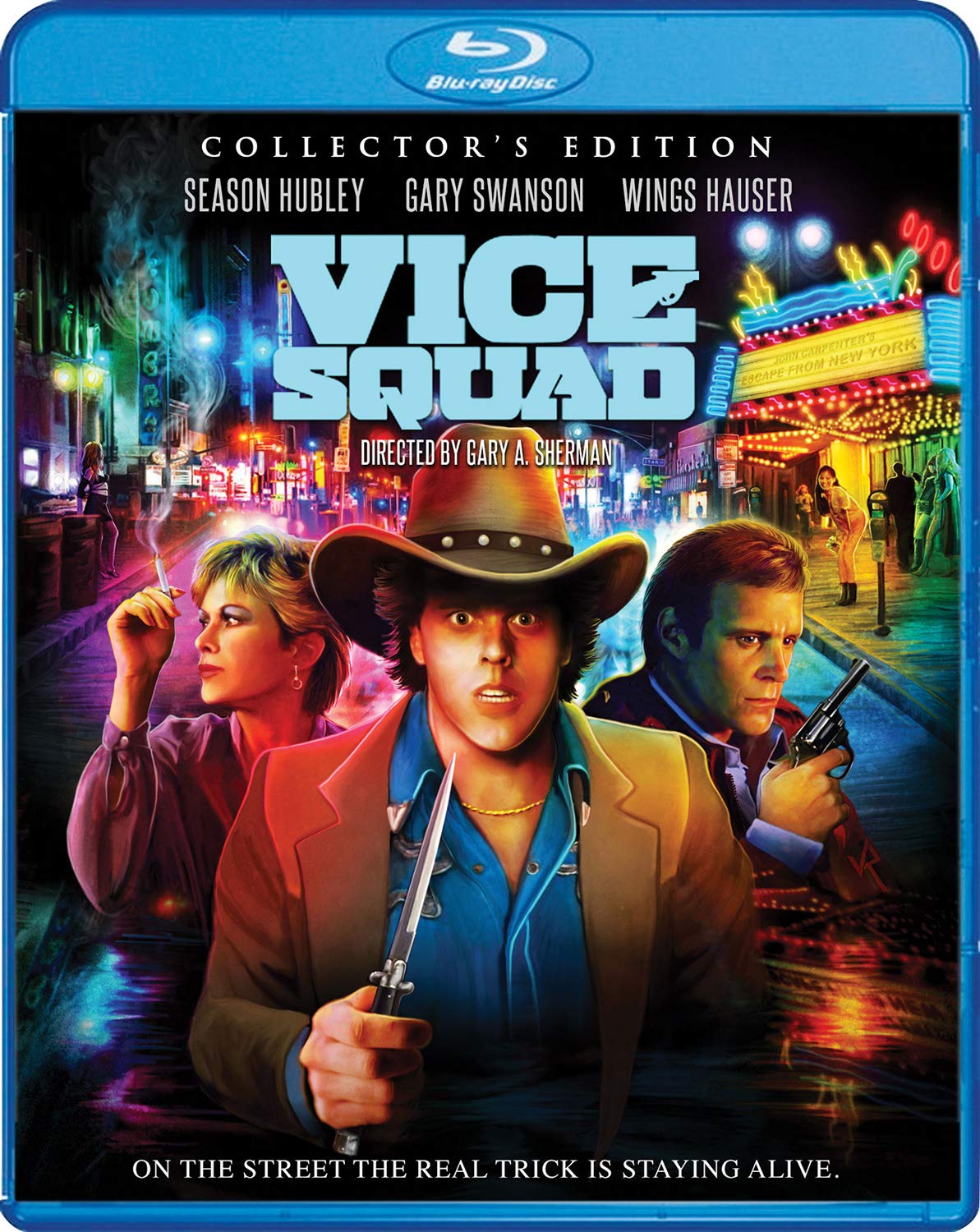 Vice Squad is one of those obscure ’80s films that I had never heard about until a company announced a Blu-ray release – in this case, it was Scream Factory doing the announcing. Of course, after the announcement, reading the synopsis had me excited for what looked to be an effective thriller about a vindictive pimp named Ramrod, played by Wings Hauser, and the prostitute Princess (Season Hubley) who is helping the police put him away. Ramrod escapes thanks to some bumbling cops and goes after Princess as she goes about her night picking up increasingly weirder clients.

It’s obvious from the beginning that Vice Squad is meant to be seen as a straight-laced thriller and there are moments where the film will make even a hardened viewer a bit uncomfortable. Wings Hauser as Ramrod is a vicious man who will stop at nothing to get back at the girl who tried to put him in the slammer. Wings Hauser does an amazing job at making you hate the man. As for Season Hubley, she excels at playing a confident yet fragile woman who loves her daughter, and works to provide for her family even if the means are a bit on the seedy side. Hubley also really sells the pain and torment she goes through, especially near the end of the film. The only other major character in the film is Tom Walsh (Gary Swanson), a detective on the vice squad, and the man who is doing everything he can to bring in Ramrod and make the streets a bit safer.

Unfortunately, the film can’t help but throw in some slapstick humour to cut some of the tension and to me personally it doesn’t work. The humour comes from two cops who at one point reenact a skit from The Three Stooges. It feels incredibly out of place and isn’t needed. Also, the cops in this film rate as some of the worst I’ve seen in cinema history. The amount of police it takes to bring down one man is staggering. Thankfully, slapstick and brainless cops aren’t enough to drag the film down to the point where I wouldn’t approve checking out this competent thriller.

Vice Squad is presented with a new 4K scan of the original film elements, using a MPEG 4 video codec at an average bitrate of 36000 kbps. The film looks pretty good, but there is some compression that is easily noticeable in screenshots, but when viewing the film on a 65″ TV I did not notice the compression. Darker scenes also tend to be a bit heavy in regards to grain, but nothing overly distracting. The included audio soundtrack is DTS-HD Master Audio Mono, and no issues crept up during my viewing. English Subtitles are included.

If lengthy extra features get you in the mood, Vice Squad is going to be your honey bunny for the next couple days. Scream has included 6 new interviews that range from 24-mins (interview with actor Michael Ensign) to 1 hour and 13 minutes (interview with director Gary Sherman). The interviews don’t focus primarily on Vice Squad but tend to go through the people’s entire career, hence the longer runtimes. We also have a location featurette, which shows you that Hollywood hasn’t changed much over the years. The last new extra is an audio commentary with director Gary Sherman and Brian Frankish. Rounding out the features are galleries, trailers and radio spots. Total approximate runtime of features is a whopping 345 minutes!

Even though Vice Squad has some misplaced humour and a police force straight from the Police Academy movies, you can’t help but end up enjoying the film thanks to solid performances from leads Wings Hauser, Season Hubley and Gary Swanson. Scream Factory has packed this Blu-ray release full of features, but the video quality takes a hit with some compression issues. Nevertheless, if stuff like that doesn’t bother you, you can rest easy knowing the Blu is worth your hard-earned money.