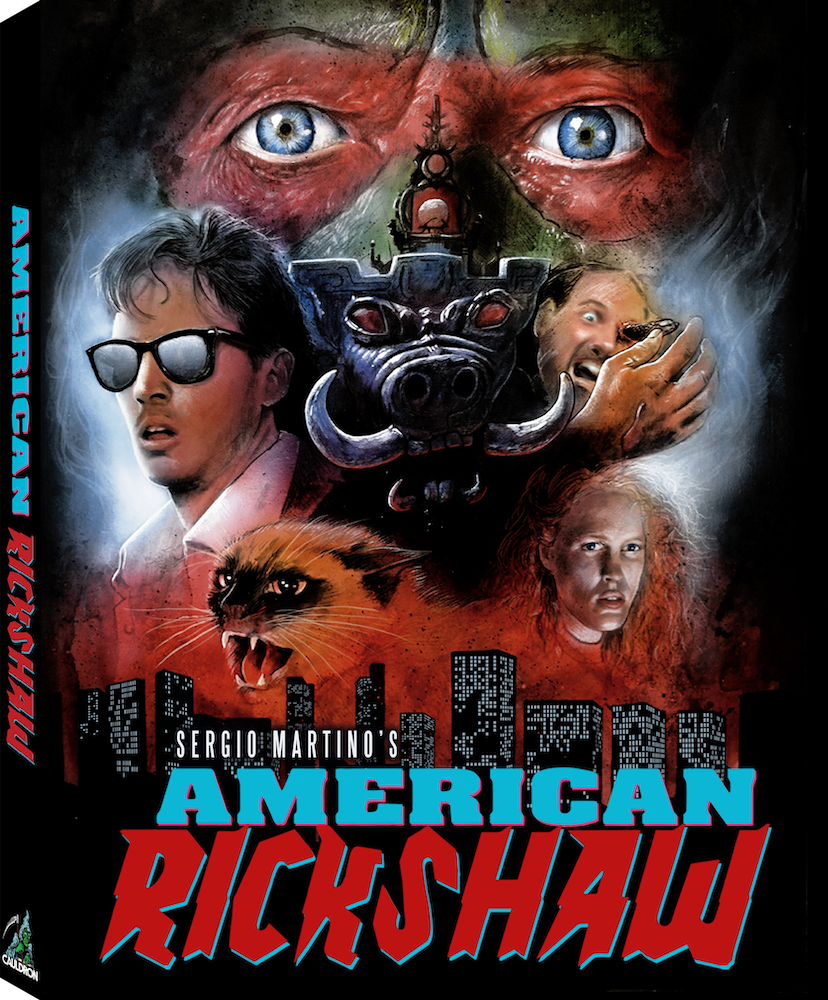 Mystical? Maybe. Spiritual Hero who appears in you to clear your view when you're too crazy

Fans might best know Sergio Martino for his work on giallo genre staples like Your Vice is a Locked Room and Only I Have the Key or All the Colors of the Dark, but he also had a sizable body of work in the sweaty action of the ’80s, including the underappreciated 1989 film American Rickshaw. Centering on Scott Edwards (Mitchell Gaylord), a rickshaw-puller in Miami’s Coconut Grove district, the movie melds Chinese mysticism with a crime drama involving prominent televangelist Reverend Mortom (Donald Pleasence) and the search for an important evil idol.

American Rickshaw is soaked with the neon tinge of the late ’80s, and it feels a lot like Jean-Claude Van Damme’s output during this time. There’s a bit of humor, a twinge of a love story, a menacing overarching villain and a gun-wielding hitman, and a lot of sweaty half-naked dudes; all of it is the ideal pastiche of an action film, especially with the pathos of Gaylord’s character as the protagonist.

Martino plays things fairly straightforward except for the various intercuts of a Chinese elderly woman named Madame Luna (Michi Kobi) who seems to be able to mystically conjure fire whenever Scott’s in trouble. Throughout much of American Rickshaw, this element is left unexplained – we know that Scott has been born on 6/6/66, and we know that he was born at the apex of the Year of the Tiger, but the extent of his involvement in whatever Madame Luna is up to, and why he’s the victim of a hitman’s (Daniel Greene) ire or a femme fatale’s (Victoria Prouty) targeting, is left in the air until the finale.

What this means is some surreality mixed in with the film’s more naturalistic action and car chase sequences. Martino directs all of these with panache, one of the most notable being a parkour-and-car escape in a parking garage. American Rickshaw is consistently alluring, both because of its nostalgic qualities and its ability to keep the audience interested in just how all of these disparate elements will connect. Ultimately, its finale relies a little too much on direct dialogue exposition to explain it all, but it’s a cliche that can be forgiven thanks to the film’s commitment to leaving the viewer hanging onto its threads for the entire ride.

American Rickshaw has too long languished without recognition for its contribution to the action genre, but Cauldron Films gives it a proper home for American Blu-ray collectors. This one is definitely worth checking out and going in blind, an all-around entertaining offering from Martino.

Cauldron Films is a new boutique Blu-ray label that aims to give some of the other companies some healthy competition, and they’ve certainly brought that with their release of American Rickshaw. The film gets a 2k restoration from the original camera negative, and the results are, frankly, fantastic. A minimal grain scale still provides healthy detail to hair, skin, and clothing, along with consistent definition throughout the entirety of the movie. Blacks are well-managed with no crush, outdoor scenes are gorgeously rendered, and the film really shines because of this treatment.

The film takes on a pinkish, cooler hue that does not seem to be present on a previous Cinestrange Blu-ray release; however, comparing the rest of the color timing, that Cinestrange release looks too dark and contrasty for my taste, and the Cauldron Films restoration is worlds better on just about every front. This is a very strong offering as a first taste of what Cauldron can provide.

Audio is presented in an LPCM 2.0 stereo track that sounds excellent, with no drops, hiss, distortion or other audio anomalies. English subtitles are also included – the menu automatically starts the film when you select this option. Interestingly, the new audio commentary with Samm Deighan and Kat Ellinger is also an LPCM track, which is certainly not the normal quality for those types of extras.

Extras include that aforementioned audio commentary as well as a stand-alone podcast effort from The Projection Booth Podcast which does not play as an audio commentary due to its shorter length. A new interview featurette includes both Sergio Martino and production designer Massimo Antonello, who both go into detail about previous body of work and then some involvement on American Rickshaw; you also get to see the evil idol on display on Antonello’s bookshelf. Finally, a short series of location shots provide a look at the Miami shooting locales from the film and now.

We did not receive a full copy for review so I cannot comment on the packaging.

CHECK OUT
Our full gallery of uncompressed screenshots for this Blu-ray.

This is an impressive release from Cauldron Films and it gives American Rickshaw a home for American audiences. This one is definitely worth grabbing. 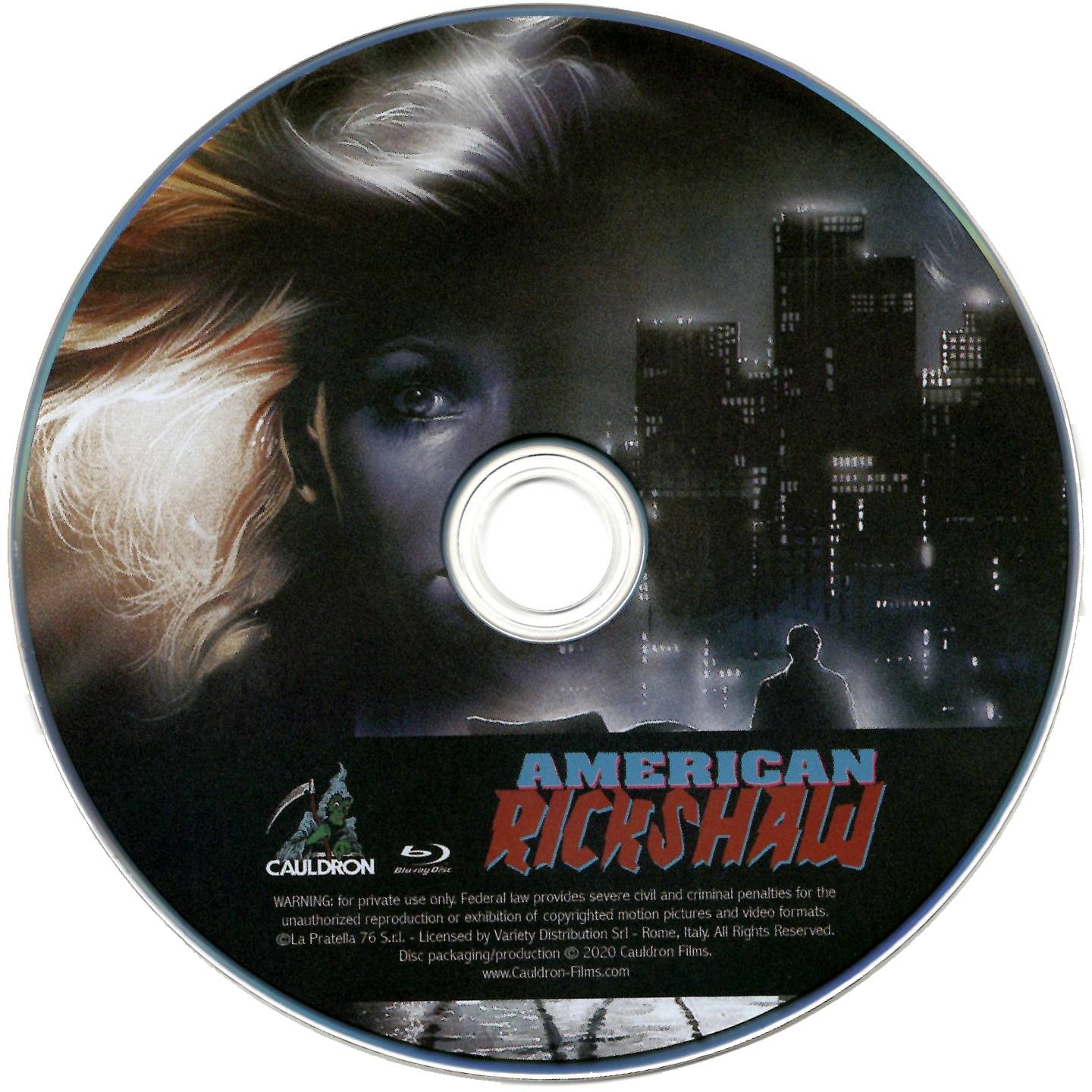