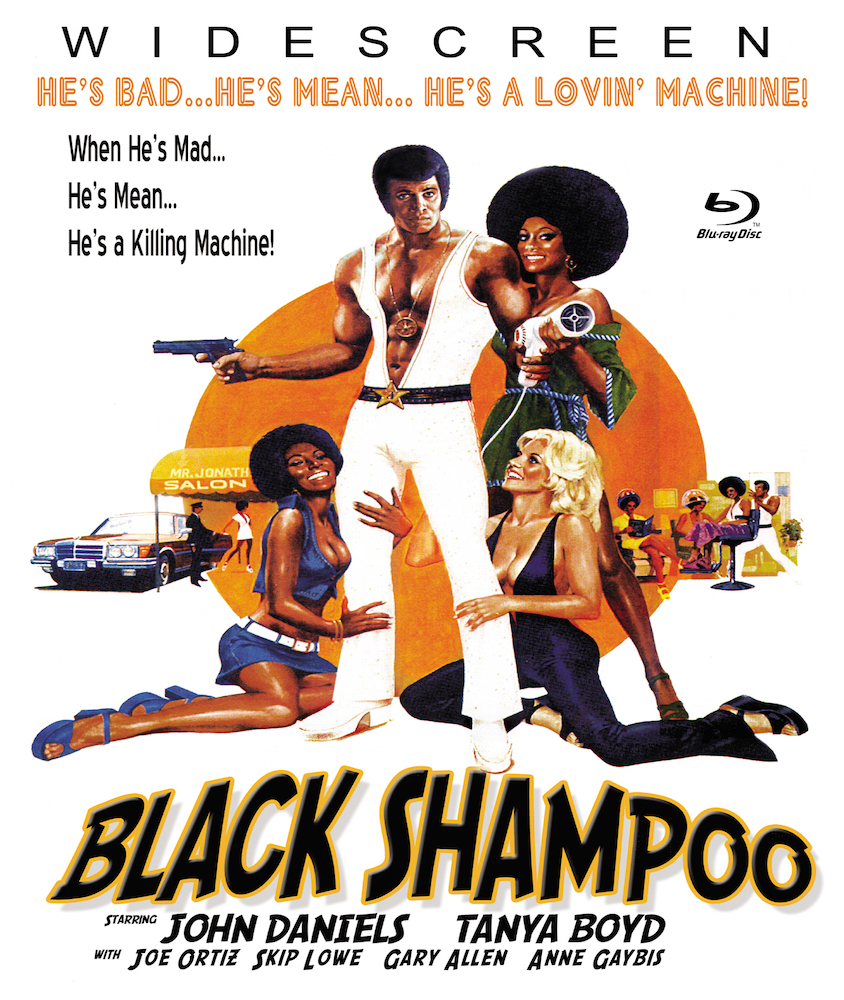 Damn, I should have been a hairdresser.

Whatever happened to the good old days of ‘70s Blaxploitation films? When did they stop becoming popular and why did that ever happen? I can’t picture one Blaxploitation flick that wasn’t fun, so there is no reason for them to have disappeared as they did. Sure, they may not be balls to wall excitement, especially in today’s reviewed film Black Shampoo, but they are indeed over the top, with loads of nudity, badass characters, and a “who gives a shit we’re going to go wild” attitude. I think we need to bring this genre back!

Anyway, let’s talk a bit about Black Shampoo, released on Blu-ray from VCI Entertainment. Reliable Readers might remember that we had this listed on our 10 Cult Films That Need a Blu-ray Release, and I like to think that they saw our list and said damn, they know what they are talking about, and promptly went to work on releasing the film. Has VCI done a worthy job? I’ll tell you in a bit but let’s discuss the story of Black Shampoo.

Black Shampoo features John Daniels as Mr Jonathan, the hottest hairdresser in LA. Well, he doesn’t so much as dress your hair up in style, but just wet it and then blow it, and then promptly give you a good pounding. The women that come to him know this, and that’s why they keep coming back. In between affairs, Jonathan must deal with some nasty mob fellas who have come to take back Jonathan’s receptionist, Brenda (Tanya Boyd), who used to work for the head honcho. Now he wants her back and will stop at nothing to do just that. Jonathan, on the other hand, loves Brenda and will fight to keep her…well, for a bit. Eventually, he gives up easy and goes and bangs the next girl he needs to service. Life’s tough when you’re a hairdresser.

Black Shampoo is a ridiculous movie from a director whose job it was to make silly movies. Greydon Clark has done all sorts of beautiful gems (Wacko, Uninvited) and Black Shampoo is another notch in his wacky doodle belt that needs to be seen by any fans of cult films. It has loads of nudity, scenes that play out like a porno, a down-on-his-luck hairdresser attacking cliche mobsters with a chainsaw, and so much terrible acting. If you want to see a movie where the main character kind of a looks like a ‘70s Vin Diesel with hair, Black Shampoo is the over-the-top low budget, poorly made film that deserves a spot on your shelf.

VCI does a splendid job with the video transfer of Black Shampoo, remastering the film in 2K from the 35mm Negative. There are a few areas that are rough, with dirt and debris present in the movie, but overall the effort is solid. When you compare the DVD that has been provided against the Blu-ray, you can see that the Blu-ray offers a much crisper picture.

Extra Features are mainly text-based, but you do get a rather lengthy phone interview with actor John Daniels, and it’s nice to have the commentary with director Greydon Clark included. However, there isn’t anything new here that wasn’t offered on the DVD release.

Black Shampoo is a fun time, and the VCI Blu-ray release is a worthy upgrade over the DVD. It’s a shame no new features have been included, but overall the package is worth the purchase.

It's not a great film, but it sure is a fun one! Black Shampoo on Blu-ray from VCI Entertainment is worthy of a purchase.
Film
Blu-ray
Reader Rating0 Votes
4.2
Hosting screenshots is expensive. If you want to see more galleries, consider donating!