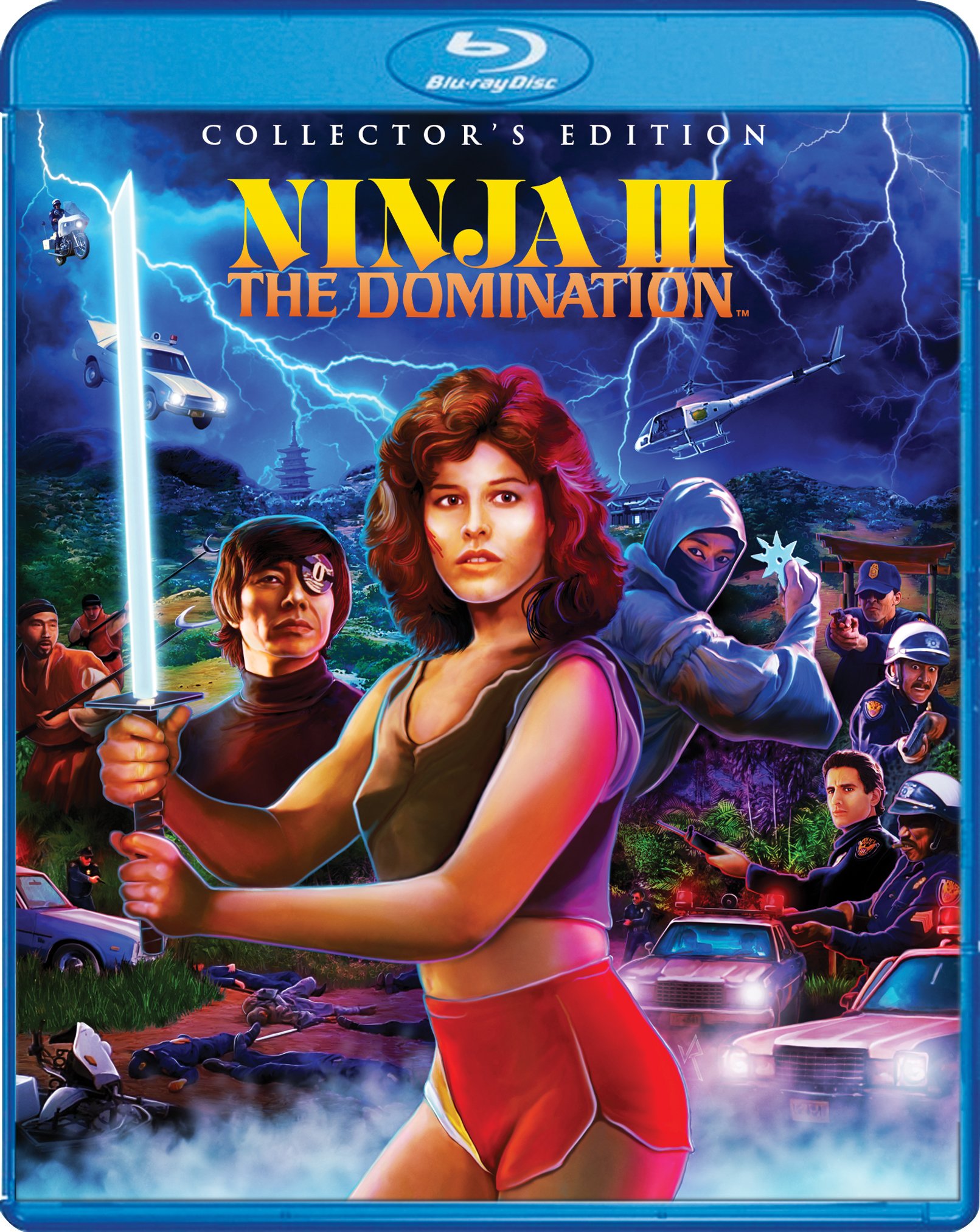 Ninja III: The Domination Blu-ray Review (Scream Factory)
Ninja III: The Domination is a ridiculous '80s martial arts film that combines The Exorcist with Enter the Dragon, and it works as a cult marvel. Scream Factory has redone their previous Blu-ray release with a great new 4k transfer and a lot of new special features, meaning a double-dip may be in your best interest!
Film
Blu-ray
Reader Rating1 Vote
4.3

A ninja gets shot a million times by a police force after he randomly murders a bunch of people on a golf course. Before he finally dies from having such massive balls, he hands off his sword to a telephone pole technician/dance instructor named Christie. She has brief visions of the police officers shooting said ninja before she becomes fully possessed by his spirit, and she begins to go on a murderous rampage using the sword and some shuriken that she finds hidden in a cave. She’ll have to be exorcised by another ninja, since only a ninja can kill another ninja. Yep, it doesn’t make much fucking sense.

Back in the ’80s, “ninja” was apparently not a common term for the average moviegoer. Thus, Sam Firstenberg’s trilogy of films simply utilized the common “ninja” in all of the film titles released for Cannon Group (Enter the Ninja, Revenge of the Ninja, and the title in question for this review, Ninja III: The Domination) and hoped that viewers would know which series was referenced. In reality, following the ordering of the films isn’t necessary, as evidenced by Ninja III‘s blatant shift in trajectory from a more traditional martial arts film to… something else entirely. In many ways, Firstenberg’s film is a marvel: a truly revelatory product of mismatched themes stolen from popular cinematic successes, all done extremely poorly. And just as surprising as a shuriken to the face, it actually sort of works.

The film follows telephone pole technician Christie (Lucinda Dickey), an active woman who accidentally gets caught up in a dangerous reality when she is possessed by the spirit of a dead Black Ninja (David Chung) who wants revenge all of the cops that murdered him after he himself cuts up a bunch of innocent people in the film’s opening. Combining the martial arts elements of Firstenberg’s Enter the Ninja and Revenge of the Ninja with some familiar possession effects from The Exorcist, Ninja III: The Domination messes around with exorcism scenes, poorly-choreographed stunt sequences, and ’80s dance moves straight out of Breakin‘ (also a Dickey vehicle) for hilarious results. And it’s absolutely a recipe for cult film status, since almost every moment of Ninja III is unintentional comedy gold; it’s almost too easy to mine the memes.

No one’s going to say that Firstenberg’s movie is truly “good”; seriously – Sho Kosugi wears a katana hand guard as an eye patch, so I think that’s all that needs to be said about the quality of this film. Yet there’s a charm within that makes the viewer keep watching. Perhaps they’re titillated by the infamous V8 love scene, or maybe it’s just Jordan Bennett’s grizzly bear body hair that keeps men and women coming back. There’s a majestic supernatural quality to Nina III that attracts to its sliced-and-diced plot, and if anyone doesn’t have even a little bit of fun with this movie, it’s probably time to cut them out of your life Black Ninja style.

There’s a lot of action-based violence, none of it super graphic. Most of the gore is just minor cuts from katana strikes. The film isn’t attempting to be explicitly violent, though, and it’s more about those sweet sweet throwing star kills.

Again, nothing explicit but we do get to see a lot of Lucinda Dickey – mostly in her workout clothes, but also a quick underwear shot – as well as one busty chick in a bathing suit in a situation where I was just waiting for her to pop out of her top. (Alas, she doesn’t – doing the real research here.)

Ninja III: The Domination was originally released by Scream Factory as a Blu-ray/DVD combo pack back in 2013, but this time the company has given it a special Collector’s Edition package. They have also done a new 4k transfer of the film from original film elements. The video quality on this release is pretty good, although the movie occasionally suffers from softness. Grain is kept to a minimum, a bit better than the previous release. Color is well-represented here, especially during the supernatural scenes when the ninja’s spirit is causing mischief in Christie’s apartment: there’s a lot of neon red strobing and that looks great on this 4k transfer; some skintones do take on a waxy appearance, though. Overall, this is another good transfer of the film, with the two versions Scream Factory has released being notably different.

The film gets a DTS-HD Master Audio 2.0 track with no real flaws or issues besides a couple of somewhat muffled sequences. Other than that, all the great ’80s music is perfectly encapsulated on this release. There’s also English subtitles to accompany the audio.

Here’s where the real meat of this Collector’s Edition comes into play. Back when the first edition of the film released, Scream Factory only included an audio commentary with Sam Firstenberg and stunt coordinator Steve Lambert. That commentary is ported to this Blu-ray as well, but with quite a few new extras.

The first is an 18-minute interview with Lucinda Dickey, a feature that many fans will be clamoring to see. She talks about her work on Ninja III but also her picture contract with Cannon and some of her other roles – definitely a recommended watch.

Also included is a short 10 minute interview with Jordan Bennett, who’s looking good in his older age. He talks about his work on the set and some behind-the-scenes info. Another shorter interview with fight choreographer Alan Amiel adds a bit  more information on the action scenes that weren’t touched on in Lambert’s commentary. Another audio commentary (of sorts) features some audio interviews with composer Misha Segal and production designer Elliot Ellentruck, as well as an isolated score.

To round out the package, Scream has provided a still gallery, trailer, and reversible cover artwork/slipcover, plus a Trailers from Hell sequence.

Here’s the thing – your mileage is going to vary with this Collector’s Edition release. If you already own the first Scream Factory Blu-ray, the special features may be the deciding factor on whether you double-dip, because there are a number of new interviews here. The 4k scan is also very good, but Scream’s previous transfer was also well-liked. While I believe Scream Factory has done a commendable job redoing one of their older releases, the onus is on the buyer to decide how much they really love Ninja III: The Domination.