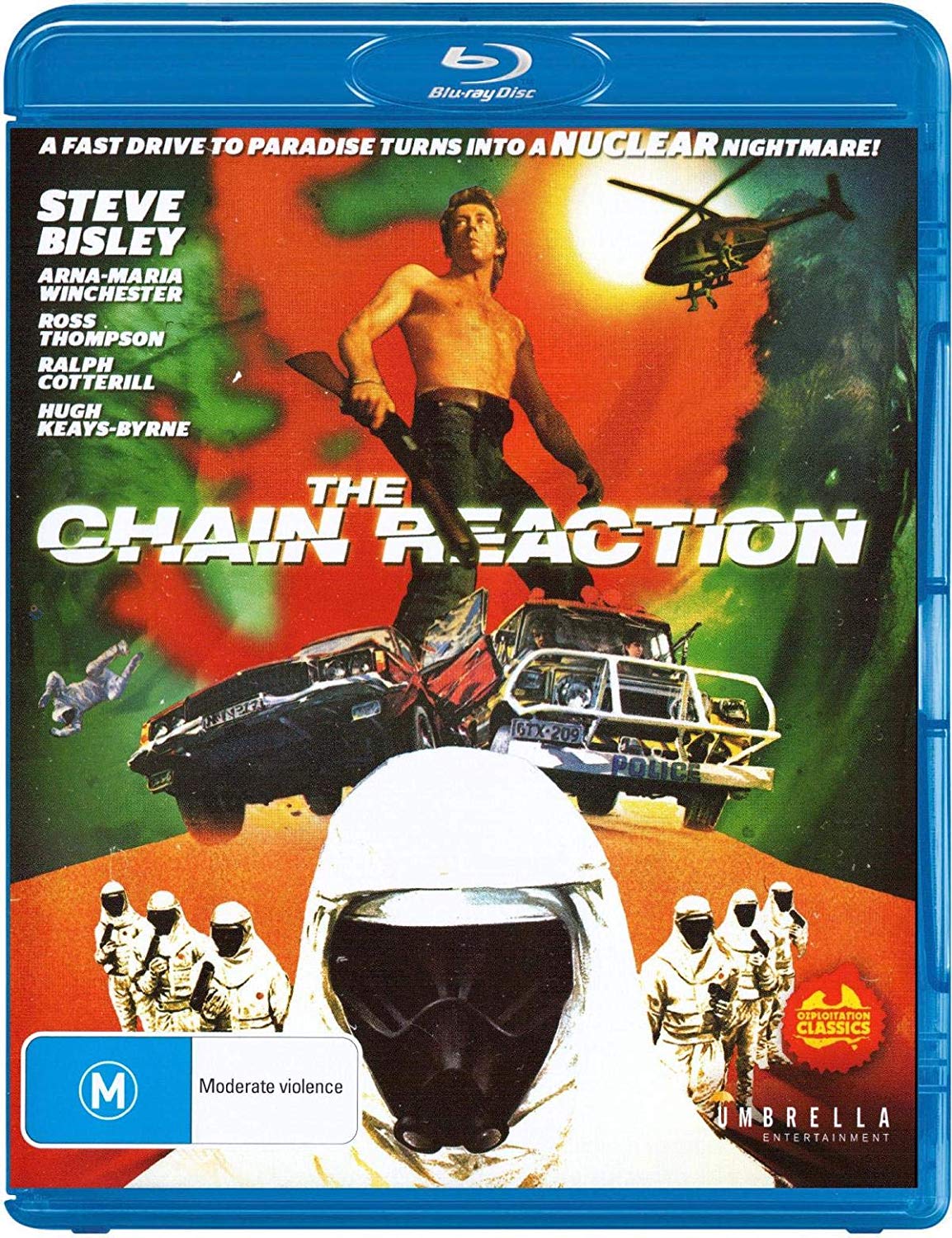 With a plot that is hard to follow, The Chain Reaction receives mixed results. Nonetheless, Umbrella Entertainment has released a solid Blu-ray with some worthwhile extra features.
Film
Blu-ray
Reader Rating0 Votes
3.7

I almost thought about doing a video review for The Chain Reaction, as it would have been so much simpler to express my confusion on video. Alas, I couldn’t find the time to record, so here I am trying to express it down in written form. As anyone who reads my reviews (I’m looking at you single person on the internet), they know I’m not the smrtest person out there, so maybe I just wasn’t prepared for The Chain Reaction? Honestly, I don’t think that’s it. I believe The Chain Reaction is a difficult film to follow because it has some issues with telling its story. A story that goes like this:

A scientist by the name of Heinrich (Ross Thompson) becomes contaminated during a leak at a nuclear plant, and he escapes from the company who want to cover it up, and for some reason or another, he gets hit on the noggin and becomes an amnesiac. He finds safety in the arms of a fast driving stud, Larry Stilson (Steve Bisley), and his beautiful wife Carmel (Arna-Maria Winchester). The government agency thinks that the couple is somehow involved in the conspiracy to hide the man, who is frantically trying to remember everything and warn the public of the contamination that is slowly leaking into the water system.

That’s the basic premise of The Chain Reaction. However, the issue I have with the movie is the way it goes about telling the story. It seems to conveniently skip or glazes over plot details that would make the story way easier to follow. When watching the film, I felt like maybe I missed a scene or two, as there were times when the actions of characters didn’t correlate to what I was watching.

Nevertheless, The Chain Reaction is still a solid Ozploitation flick, with some gnarly chase scenes, and one crash in particular, albeit easily avoidable, is a sight to behold. It’s just a shame the film itself struggles trying to tell a rather simple story.

Umbrella Entertainment has released The Chain Reaction on Blu-ray, with a solid video and audio transfer. The extra features are plentiful but seem to be older extras included on the past DVD release, with longest “new’ feature relying on the extended interviews featured in Not Quite Hollywood. I’m not complaining, though, as there are over two hours of features, and an early cut of the film titled The Man at the Edge of the Freeway.

Honestly, I can’t say I hated The Chain Reaction, and I can’t quite say I loved it either. I had a heck of a time trying to follow certain spots, which brought me out of the film and had me asking questions out loud to myself. Nevertheless, there is plenty of good stuff to be had in the movie (car chases, nudity, trippy contaminated water sequences with wacky music and all) that I can recommend checking it out. As for the fans of the film, Umbrella Entertainment has done a fantastic job at releasing an excellent looking film on Blu-ray and collecting all the features together for one all around excellent package.