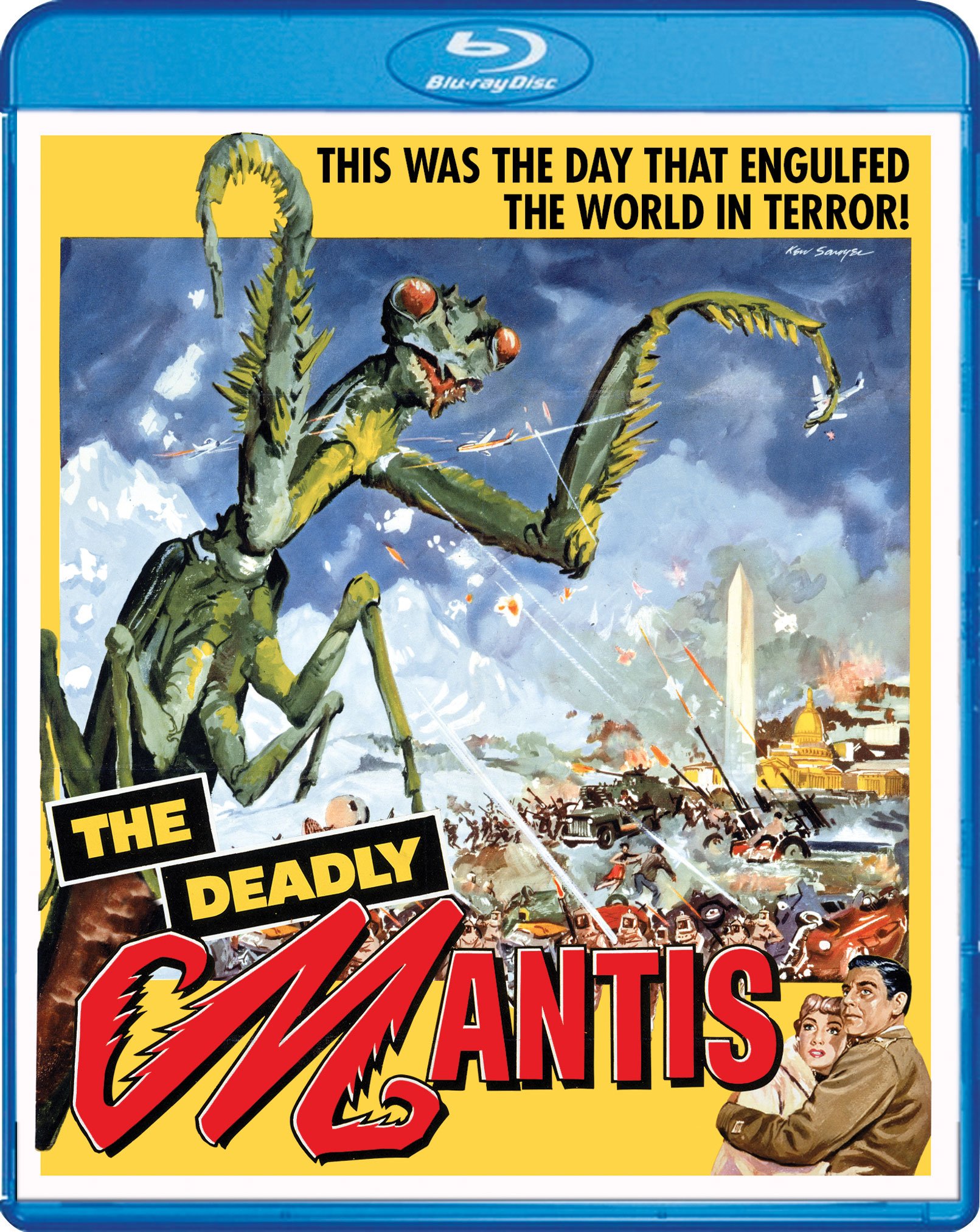 The Deadly Mantis is definitely not the best movie of its ilk, but it's still fairly fun for what if offers. Scream Factory have done a good job with the restoration and with providing some nice extras despite the film's age.
Film
Blu-ray
Reader Rating1 Vote
3.9
Buy
Amazon

Add praying mantises to the list of deadly things that assaulted scientists and the public in the radioactive era of the 1950s. The Deadly Mantis, a Universal International picture released in 1957, prominently utilizes an unlikely insect as its main antagonist, one that arguably makes far less real-world appearances than its brethren like ants, spiders, and birds. Still, Nathan Juran’s giant monster film is a globe-trotting affair that moves from cold climes of the North Pole to Maryland, following the titular creature as it weaves a path of destruction throughout the United States even as the American military assembles to stop it after the film gives its audience an educational seminar on the usage of radar segments throughout the country.

The film follows a smattering of people, including a couple of scientists, army majors, colonels, and Marge Blaine (Alix Talton), a photographer who gets to grab excellent shots of the massive creature and bed the main hero. The Deadly Mantis follows all of the common tropes of giant animal films, except in this case, it spends a long-ass time documenting the historical usage of radar, describing the anatomical elements of the mantis before its identity is revealed, and visiting various destroyed locations as Col. Joe Parkman (Craig Stevens) hems and haws about what could have done such a thing.

One major thing to note: Juran utilizes a ton of stock footage, from military jet liftoffs to troops assembling to various people looking scared. It’s somewhat unnecessary to the film and the reason I bring it up in this review is because it tends to slow the movie’s plot down considerably. As mentioned before, the film takes almost half of the running time to divulge that the destructive monster is in fact a praying mantis, something that has been privy to the audience since they sat down to watch a movie called The Deadly Mantis; keeping this a secret for so long, and not showing the thing itself until the second half, just seems like a foolish idea.

Once all that’s out of the way, the last half is a fairly satisfying forty minutes of a mantis lurking around viciously and Joe Parkman aggressively laying the moves on Marge. The mantis effects are surprisingly good, and for the most part, Juran’s pacing gets better as the mantis attacks the mainland. The film’s final concluding scene is quite good with a nice stinger scare.

The Deadly Mantis is a fairly generic ’50s monster film, and it’s not one of the best examples of the plot structure. But it’s still pretty enjoyable if you like these types of films, or if you want some dated education on the DEW Line.

Scream Factory has released The Deadly Mantis on a fairly featureless Blu-ray, which is understandable considering the film’s age. However, they have done a new 2k scan of the “original film elements,” probably an interpositive. Overall this looks quite good with crisp detail and a healthy grain layer; occasionally, the film does display some overly dark moments and the use of smoke and fog creates some heavier grain in places. The stock footage obviously does not look great, but that’s to be expected. Still, this is a great depiction of this black-and-white film and comparing it to the included Mystery Science Theater 3000 SD episode, one can see a world of difference.

Audio is presented in DTS-HD MA mono and it sounds fine, with no real volume issues or dialogue drops. English subtitles are also included.

As previously stated, this does contain the SD version of MST3K‘s episode on The Deadly Mantis, which is a nice addition to add some value much the same as what they did with The Mole People. There’s also an audio commentary from historian Tom Weaver, who also doesn’t have great things to say about the film but does espouse some history and actor information. Besides that, only a trailer and still gallery is included on the disc. There’s a full art layout on the back of the cover too.

For fans of giant monster cinema, you can’t go wrong with this release of The Deadly Mantis. Those that aren’t into this type of horror film may want to skip.

Don’t forget to check out our gallery of screenshots from this release.