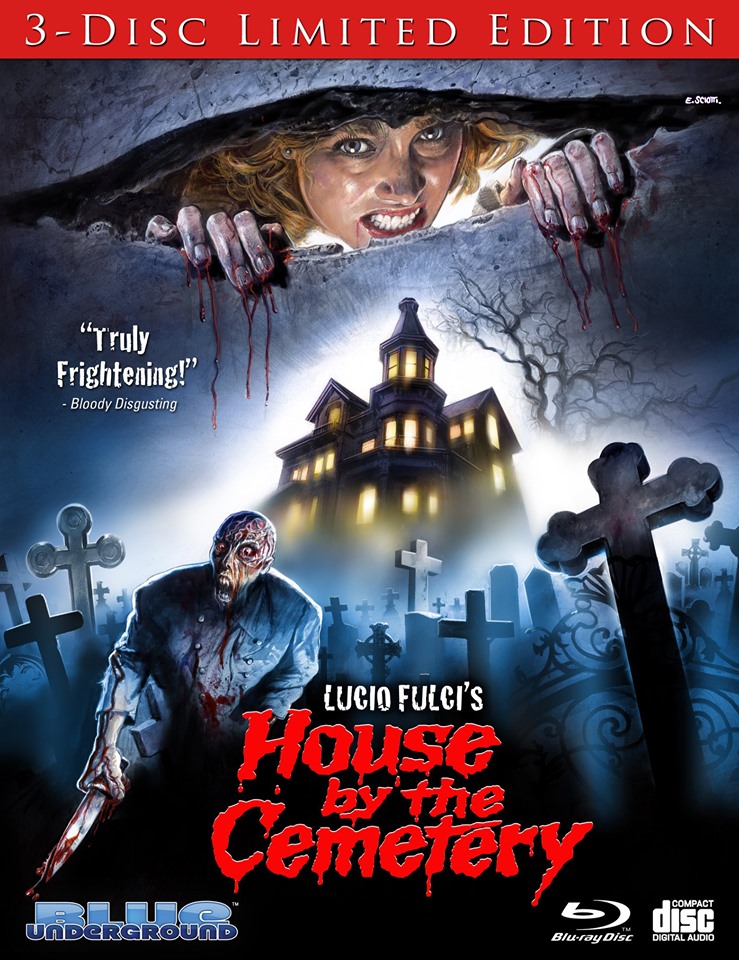 The House by the Cemetery Blu-ray Review (Blue Underground)

The House by the Cemetery is a crazy and sometimes nonsensical movie, but it still remains an excellent foray into Fulci's ouevre. Blue Underground has released the definitive Blu-ray for this film, after many other attempts.
Film
Blu-ray
Reader Rating0 Votes
Good
Film is crazy and atmospheric
New 4k scan is excellent
Additional extras round out an already packed release
Bad
5.1 track sounds a bit low
4.5
Buy
Amazon

Lucio Fulci’s The House by the Cemetery might be his opus. At times a giallo and at others an exploration of Lovecraftian/Frankensteinian themes, the 1981 film remains remarkably hard to explain; its surrealist tones add a layer of mystery, perhaps unintentionally, with an ending that quotes Henry James and seems to twist the theme of the film completely askew. It’s a unique venture that some will love while others will hate, decrying the lack of sense in its storyline; either way, though, The House by the Cemetery is an experience, one that has now come to Blu-ray thanks to Blue Underground with an excellent new 4k treatment.

The film follows a family who moves to New England into the infamous Freudstein House, a place that matriarch Lucy (Catriona MacColl) has already recognized from a painting they owned. Quickly little Bob (Giovanni Frezza) makes friends with redheaded Mae (Silvia Collatina), who warns him that they must leave the house as soon as possible. The only one who doesn’t really seem to mind living there is Norman (Paolo Malco), but that may be because he’s doing research and may or may not be having an affair with their nanny Ann (Ania Pieroni), something that’s hinted at and then, in Fulci fashion, never explored again. But the real issue with the house is the undead Dr. Freudstein living in their boarded-up basement.

Fulci has a lot of ideas going on throughout the film, and often he leaves exploration of them to dissipate into thin air. What’s left is a number of moody, atmospheric moments that often feel disconnected from each other. But they also strangely work thanks to the beautifully artistic cinematography and the unique eeriness that pervades the movie. Since every encounter feels a bit off – from the iconic close-ups of eyes to the poor dubbing – The House by the Cemetery presents a good representation of Lovecraftian otherness, even if it might be unintentional.

While viewers might not get a good explanation of the meaning behind the film from the climax, it’s best to just take the movie as it is without attempting to understand the logic jumps. Taken at face value, The House by the Cemetery is an eerie, gory watch that is Fulci at both his best and worst.

The House by the Cemetery has been released a number of times on Blu-ray, most notably an Arrow Video disc and a prior Blue Underground one. This time, Blue Underground has gone back to the drawing board by giving the film a new 4k scan of the original camera negative, which is a step up from the previous HD releases before it.

This new 4k scan really looks gorgeous, with an excellent filmic look retaining a hefty grain scale; this is often medium-heavy in body without obstruction, and it really presents all of the detail of the film. Skin tones look appropriate in this release, which had often suffered from pinker hues in previous color timing. Also of note is the lush reds, blues, and greens that saturate the picture; while there were some early complaints about an overly teal palette, these are simply unfounded; the colors look vibrant but natural, and most importantly, authentic. There is very little damage present in this release and overall, Blue Underground has restored The House by the Cemetery to its best representation.

Audio has also been nicely represented, with an English 5.1 and 1.0 DTS-HD MA track and an Italian 1.0 DTS-HD MA track as well. There were previous complaints of the audio mix on the prior Blue Underground release and they seem to have rectified that on the 1.0 track. The 5.1 tends to have a bit softer mix with dialogue coming out of all speakers, and I expect that most will want to stick to the original mono mixes.

Extras are unsurprisingly great thanks to an added second disc. Blue Underground collects all of their previous bonus features, including deleted scenes and many interviews, and adds to them with a few new offerings too. One is a new audio commentary with Troy Howarth who gives a lot of detail about the film thanks to his knowledge of Fulci. On the bonus disc, new interviews with co-writer Giorgio Mariuzzo and Stephen Thrower add even more behind-the-scenes info (disclaimer: my Thrower interview seemed corrupt, and I was only able to watch a few minutes of it). Also included is a lengthy Q&A session with Catriona MacColl.

Another excellent edition to this release is a CD of the film’s soundtrack, along with a nice lenticular slipcover and an essay booklet from Michael Gingold. Overall, Blue Underground has given this release of The House by the Cemetery the same excellent treatment as their past 4k releases of Zombie, Maniac, and Two Evil Eyes.