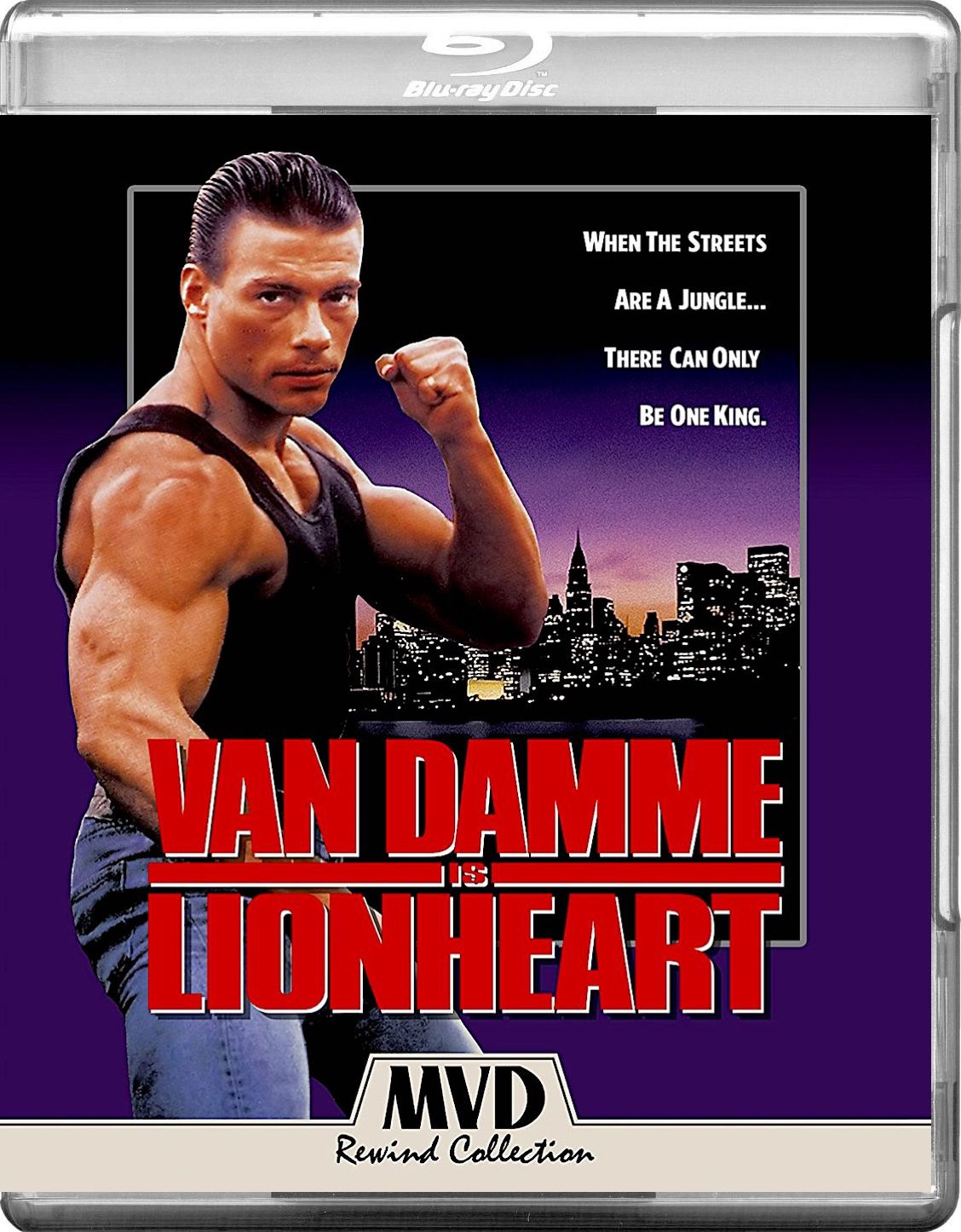 Lionheart Blu-ray Review (MVD Rewind)
Lionheart is occasionally sappy and often punchy, but it's a pretty entertaining flick that finds Van Damme's character garnering a lot of sympathy. MVD Rewind's Blu-ray isn't without flaws (an audio issue on the theatrical cut) but the sheer amount of extras make this worth grabbing.
Film
Blu-ray
Reader Rating3 Votes
4.2

Lyon escapes from his duties in the French Foreign Legion because his brother Francoise was set on fire and is now on death’s door. Unfortunately, being on the run means Lyon has no money, and he winds up across the country in New York City instead of in Los Angeles where he needs to be. He begins streetfighting for money thanks to his new manager Joshua, and once a prominent fight organizer notices him, Lyon begins rumbling in even more high-stakes gigs. It’s all for his sister-in-law and niece, though, and things begin to steadily go downhill as Lyon starts getting harder opponents while being surveilled by the Foreign Legion.

By the time of Lionheart‘s release in 1990, Jean-Claude Van Damme had become a pretty well-known name, at least in action movie circles. 1988 and 1989 were landmark years for the actor, starring in releases like Bloodsport, Black Eagle, Kickboxer, and Cyborg. Sheldon Lettich, co-writing and directing on the film, was able to uncover another mammoth blockbuster from the actor, who helped contribute a lot of the storyline for Lionheart. In the film, Van Damme plays a heavyhearted heavyweight known as Lyon, a French Foreign Legion deserter who is deadset on making it back to Los Angeles after his brother suffers life-threatening third-degree burns during a drug trade.

The film finds Van Damme in a stoic but empathetic role here, a guy who doesn’t say much with his words but certainly packs a punch with his emotions – oh yeah, and with his fists as well. Lionheart is all about family and the depths we plumb to get back to them, and in the film’s case, it sees Lyon beating the shit out of people in order to make enough money to get to his sister-in-law Helene (Lisa Pelikan) and his niece Nicole (Ashley Johnson). Aside from all of the violence and brawling that Lyon is forced to take part in, Lionheart does a pretty good job of showing the audience just how kind-hearted Lyon really is, and that’s important because that theme isn’t really sold by Van Damme’s acting alone. He’s minimal and softspoken, rarely eliciting much emotion besides a grin or the occasional pained expression; but the supporting cast make up for Van Damme’s stoicism by elevating the film’s sympathetic plot lines.

With that said, Lionheart is a pretty cheesy action movie. Lettich attempts to pull on heartstrings by alternating between Lyon beating the crap out of ripped assholes in streetfights all over LA and overwrought emotional scenes shared between Lyon and Helene and Nicole, most of which involve Nicole eliciting high-pitched whines about how much she likes Lyon. All of these moments are set to tender ’90s sitcom-esque music, and sometimes a tear or two is shed as well. Viewers will probably see right through Lettich’s forced attempts to generate emotion, but Lionheart isn’t really hurt by this; it’s simply there to drive Lyon to his next fight.

And fight he does in many street brawls set in unique locations like a parking garage or at a rich muckety-muck’s poolside retreat. The choreography is pretty good, although Lettich relies a bit too much on video game-like repetitions of certain hits that are shot from multiple angles. Lionheart does have some stakes, though, especially as Lyon begins to fight more aggressive opponents and once we learn that his fight manager Cynthia (Deborah Rennard) is actively working against him because he wouldn’t sleep with her. While there’s nothing too shocking about Lionheart‘s move set, the action scenes are good and well-spaced throughout the film, and they play out almost like boss fights for the heroic Van Damme.

Lionheart isn’t Van Damme’s best film, but it’s got a heaping dose of brawn and heart, a simple storyline that evolves in its complexity thanks to its recurring characters and the French Legion’s watchful eye. There’s a lot to like here especially if one is a fan of other Van Damme fight films, and though the film’s corniness hasn’t aged particularly well, it’s definitely a film worth checking out due to strong performances from Harrison Page, Rennard, and Pelikan.

There are a lot of fight scenes in Lionheart, most of them not particularly violent but still well-choreographed. The final fight between Lyon and Attila is the most brutal, and it’s probably the best of the bunch in the film.

No nudity per se, but Deborah Rennard appears quite a bit in sexy lingerie or workout outfits, and the aforementioned pool fight has a lot of women in high-cut bikinis.

MVD Rewind has released Lionheart with a Blu-ray/DVD combo pack, and most importantly, they’ve included both the theatrical cut and the extended cut of the film. Both get HD transfers but look considerably different.

The theatrical cut has a lot of chunky grain that can at times be a bit distracting, even showing up on skin tones and other elements. The film itself looks quite good, with a consistent color grading and even skin tones, and overall detail is sharp. That grain presence, however, can be a problem that obscures the image.

The extended cut of the film uses a different transfer and looks far less grain-heavy than the theatrical cut, but it’s apparent that some DNR has been applied to remove that layering. Still, the extended cut looks much smoother to my eyes and despite some loss of detail, I prefer it to the overly chunky theatrical cut. Colors are consistent, skin tones don’t take on an overly waxy tone, and there’s very little damage during the traditional theatrical scenes. However, this version does splice in the extra cut scenes that make this version about 6 minutes longer than the theatrical cut, and this does mean that some of the transitions between shots are jarring due to the extra scenes’ lack of quality. Most notable is the difference in color tone and a lack of sharpness. Still, the extended cut is my preferred version on this release. The DVD only has the theatrical cut.

On the theatrical cut, MVD Rewind provides the original stereo 2.0 uncompressed PCM along with English, Spanish, and French subtitles. Unfortunately, this track does suffer from some tinny sounds and echoey reverb, something that I would describe as the sound of a jet engine continually flying overhead. It isn’t always present but it’s noticeable quite a bit throughout the film, and it’s problematic enough that there will most likely be a replacement disc for it. This also occurs on the Blu-ray version.

Lionheart is packed with extra features, containing both new and archival elements. For the new, MVD Rewind has assembled three different featurettes with interviews with cast and crew. The first is a 45+ minute making-of featurette containing interviews with Van Damme, Lettich, Rennard, and more about the production behind Lionheart and how the film expanded from Van Damme’s initial story. The second contains less specific interviews with the same cast and crew about their experiences during the film, shot at the same time as the making-of featurette (about 25 minutes). The third new extra is a look at the choreography and fight sequences in Lionheart, including some comments from Van Damme (about 11 minutes).

Finally, the packaging itself contains a poster for the film, another nice addition from MVD Rewind. It also comes with a slipcover. Overall, despite a few flaws with transfer and a more serious audio issue (with a replacement program on the way), this Blu-ray is quite good and is packed with bonus features that make it worth the purchase.