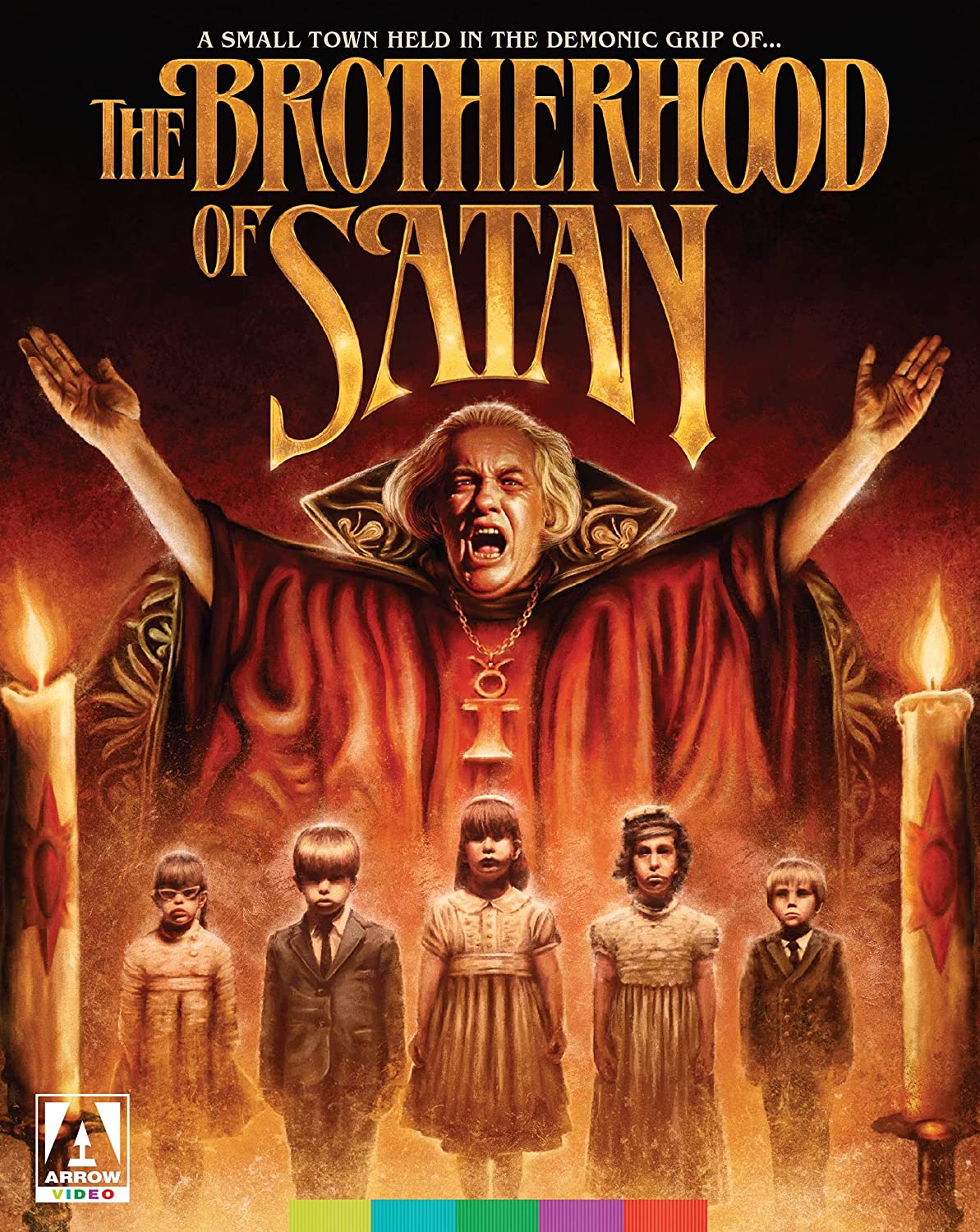 I sure do miss the good old days when people were panicking that Satanists were out to kidnap their children and kill you while you were sleeping. Thanks to this hysteria, we got a lot of really cool movies back in the day: Rosemary’s Baby, The Devil’s Rain, The Exorcist, Blood on Satan’s Claw (which is seeing an upcoming Severin Films Blu-ray release). But we aren’t here to talk about those films; instead, we are talking about the one flick I had never even heard about until Arrow Video announced their Blu-ray release, titled The Brotherhood of Satan. Released in 1971, just three years after Rosemary’s Baby, The Brotherhood of Satan is a surprisingly solid film with competent acting, an engaging story, and a snappy runtime of 92-minutes. It may not be perfect, but it’s certainly one film that pleasantly surprised me. Read on to find out why.

The story sees Ben (Charles Bateman), his daughter K.T., and his new girlfriend Nicky (Ahna Capri), on a road trip to visit family. During a lengthy and awkward silent drive where no one says a single word to each other, they come upon a car wreck with several people dead inside. They head to the closest town of Hillsboro to tell the local sheriff (L.Q. Jones). When they arrive, they are accosted by the villagers, who all appear to be going a bit mad. They quickly try to get out of town, but after an incident on the road, they realize they can’t. It seems no one besides them have been able to leave or come into the town. We eventually learn that a Satanic cult is keeping the town under their thumb while they work at kidnapping children for their super-secret ritual. Can the newcomers, the sheriff, and the hunky priest save the day? You’ll have to watch the movie to find out!

The Brotherhood of Satan grips you right away and never lets up for the 92-minute runtime. What I enjoyed so much about this film is the fact they don’t bother giving you tons of needless exposition. Instead, they show you what you need to know, and as the movie continues, everything sort of falls into place. However, the one complaint I do have is the ending, which comes fast and ends abruptly. I can see what they were going for with the ending, but there are a lot of questions left unanswered. This will likely frustrate a lot of viewers. I know I’m being ultra vague here as I don’t want to spoil anything, which reminds me. Do not, I repeat, do not watch the included trailers on the Blu-ray until after you’ve seen the film. Like all classic ’70s and ’80s trailers, they do everything possible to spoil the movie and its ending.

The Brotherhood of Satan Blu-ray Screenshots (Arrow Video)
Check out full uncompressed screenshots of this Blu-ray.

Speaking of the Blu-ray from Arrow Video, we get an all-around solid release. The transfer was supplied to Arrow Video from Sony Pictures, and for the most part, we get a nice-looking transfer. There is one scene with some damage that jumps out at me. It happens just before a scene transition, which is something I’ve noticed in a lot of older films where the quality tends to drop during transitions. It only happens for a few seconds, but it was quite noticeable. Other than the occasional dirt and specks during scenes, the film looks great, especially when you compare it to the unrestored trailers provided on the disc.

The audio option provided for the disc is LPCM 1.0 Mono, and I didn’t have any issues while watching the film. The score by Jaime Mendoza-Nava (The Town that Dreaded Sundown) comes through your speakers clean, and the opening carnage involving a tank is hearty and full. No issues hearing dialogue either.

Extra features might not be as stacked as other releases from Arrow Video, but what we are provided is both enjoyable and informative. We have a 15-minute visual essay by David Flint, who goes into great detail on The Brotherhood of Satan. Next is an 18-minute sit down with actors Jonathan Erickson Eisley and Alyson Moore, both of whom played children in the movie. They reminisce about their time on set, their relationship with L.Q. Jones, and how damn intense Strother Martin was. Rounding everything out are those spoilerific trailers, a radio spot, an Audio Commentary with writers Kim Newman and Sean Hogan, a collectable booklet and a fancy slipcover for all those slipcover loving fiends out there.

The Brotherhood of Satan was a wonderful surprise for me. I wasn’t sure what to expect when I popped it in, but I was floored by the creepy story and the acting, especially from Strother Martin, who goes all out here. Arrow Video has released a great Blu-ray for fans or anybody curious about this lesser-known cult film. 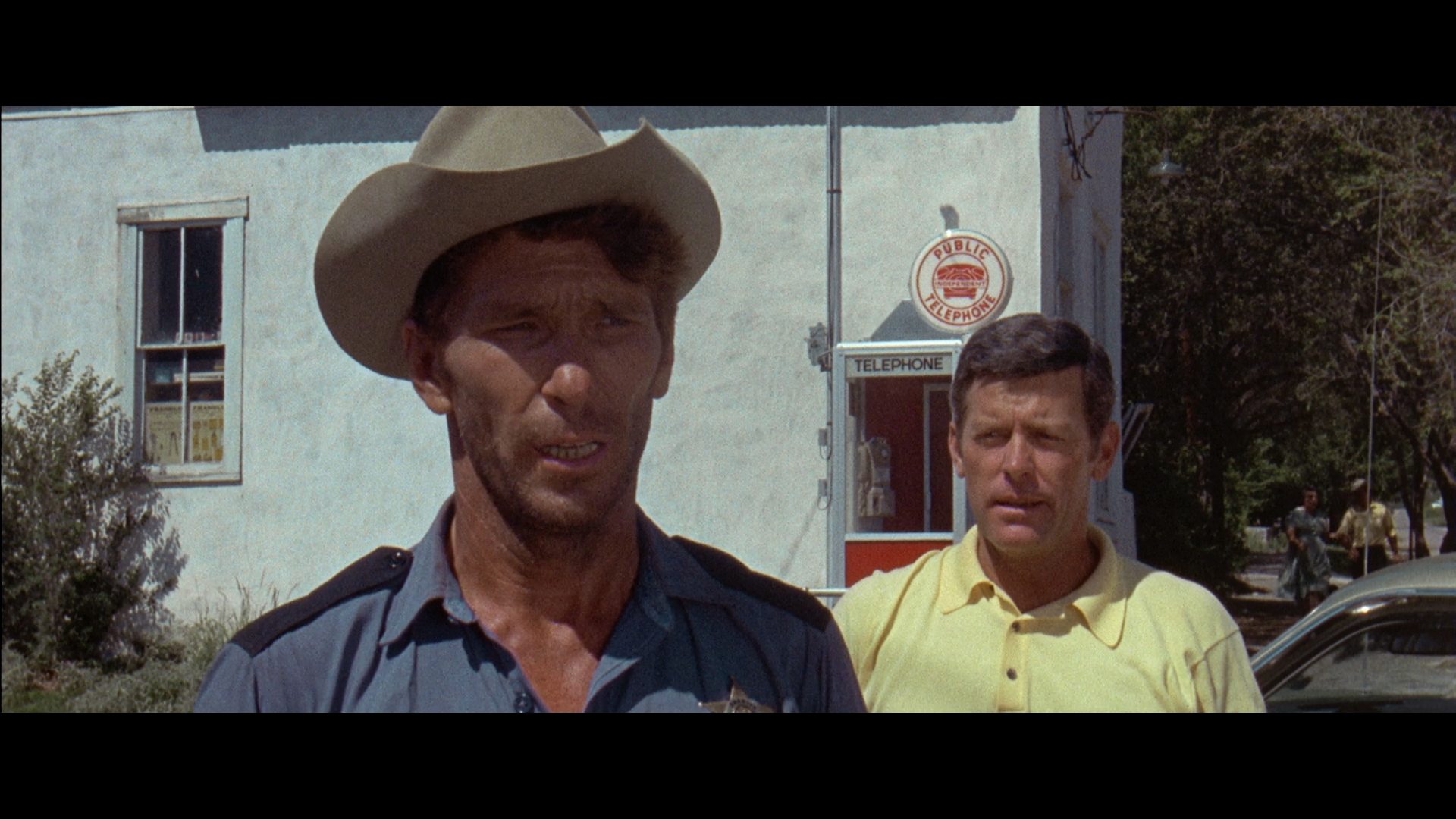 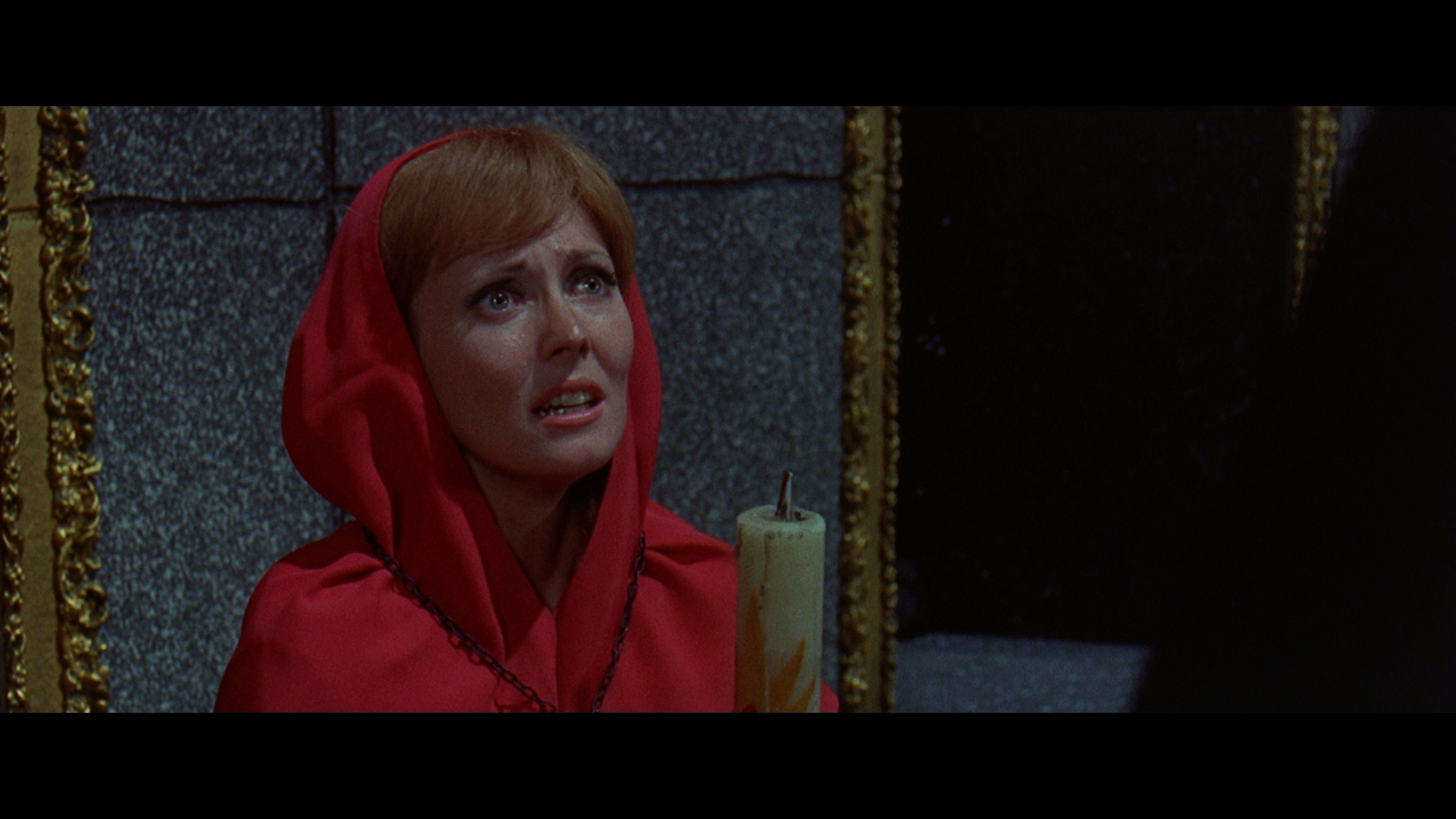 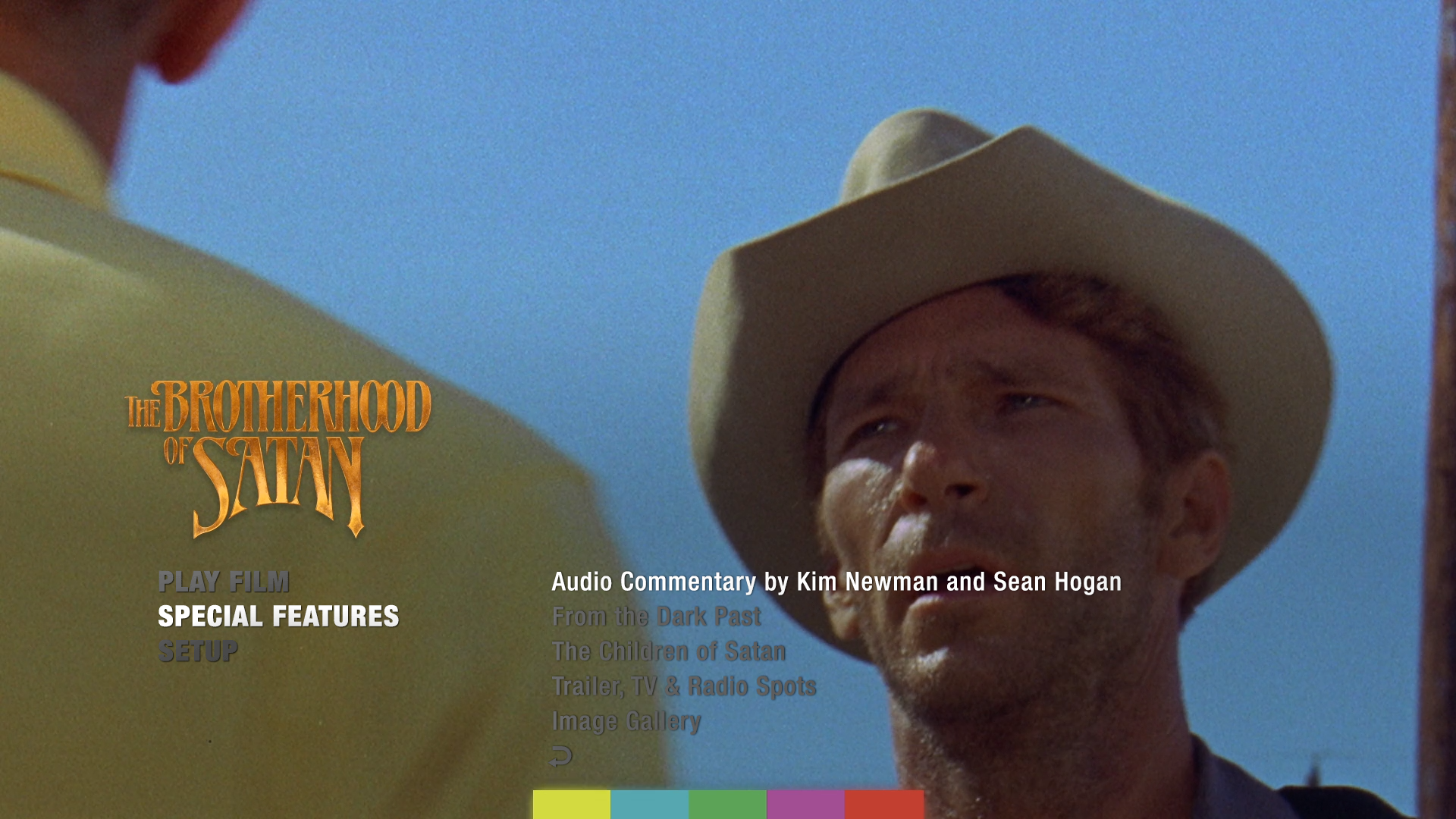 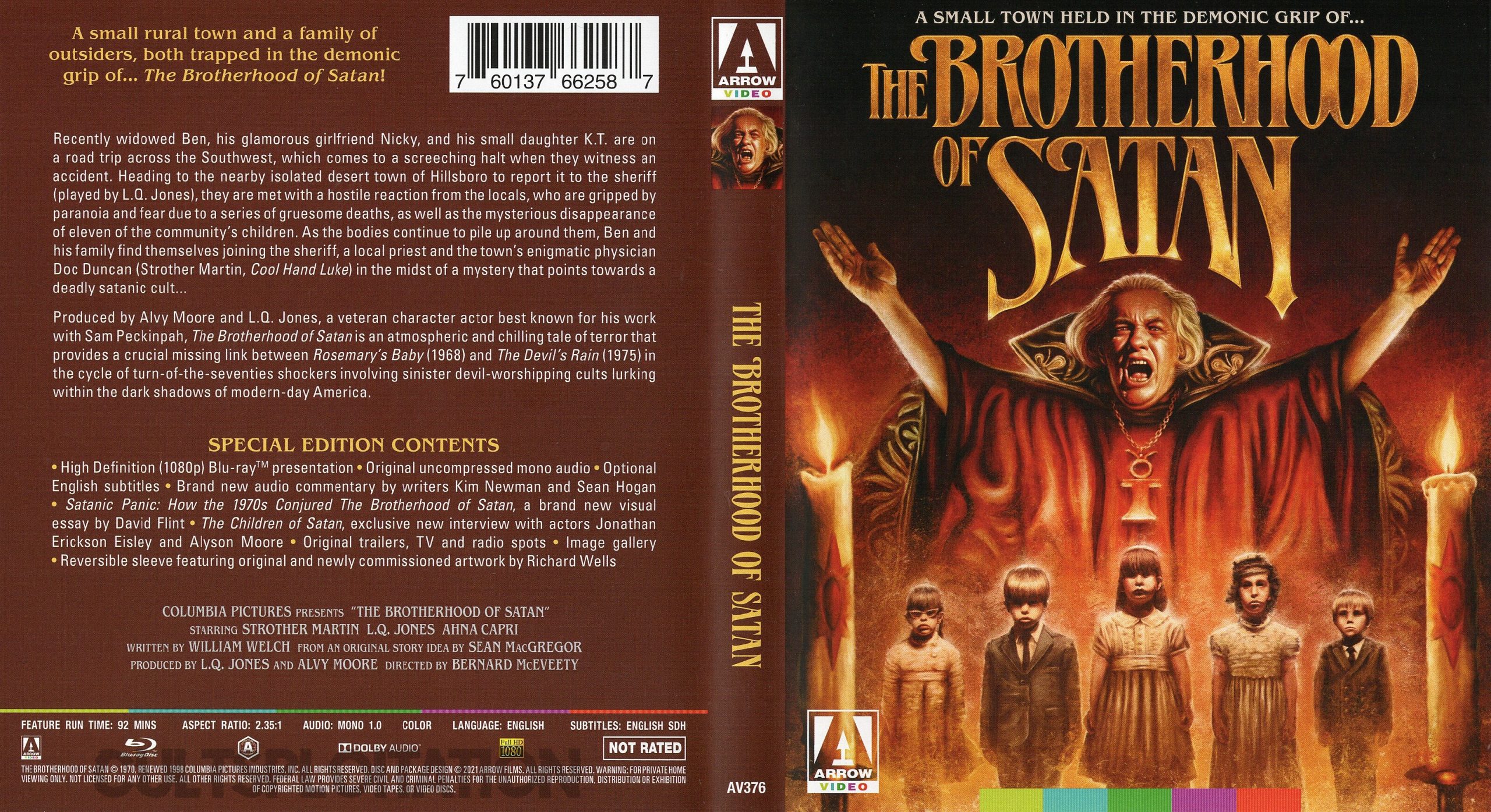 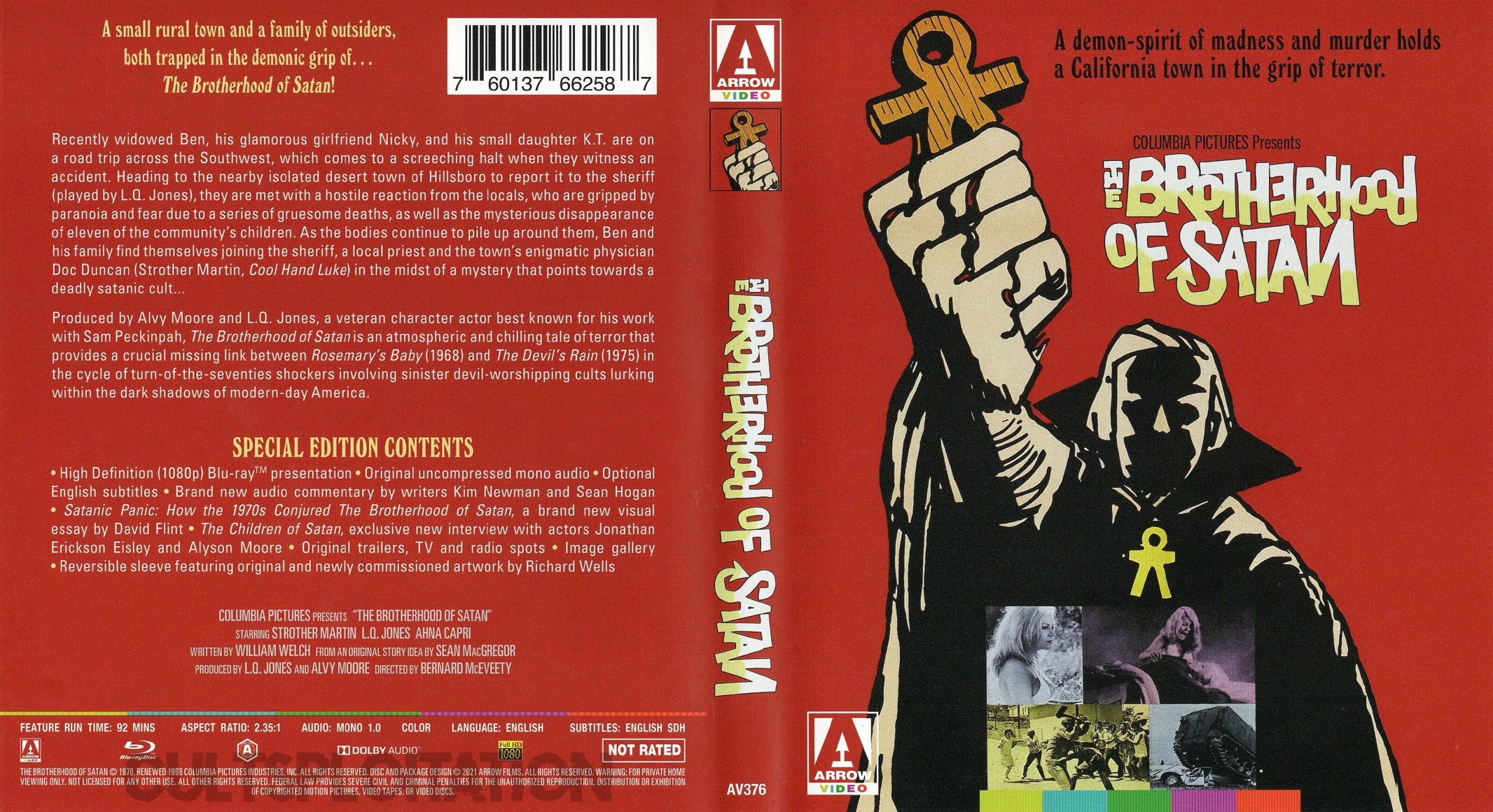 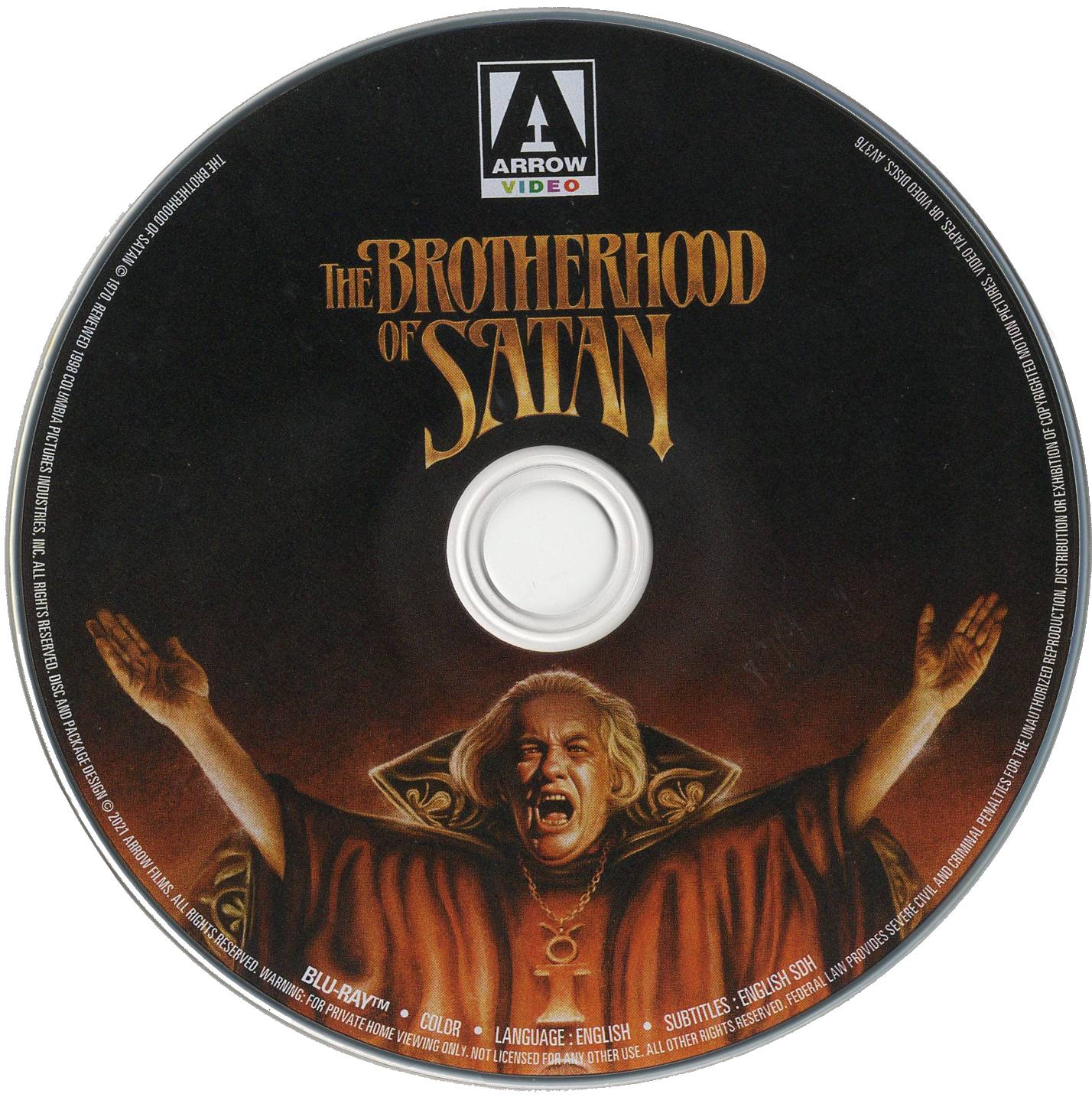 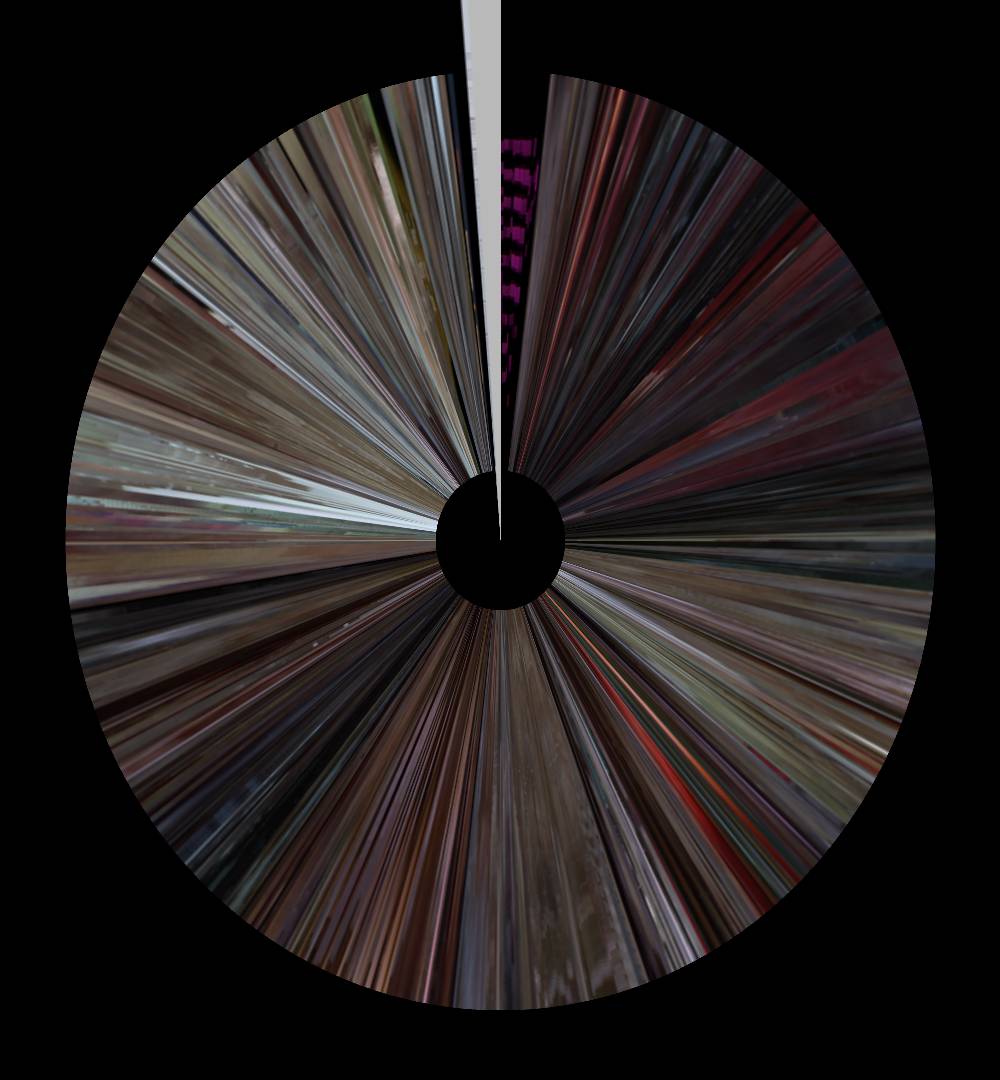