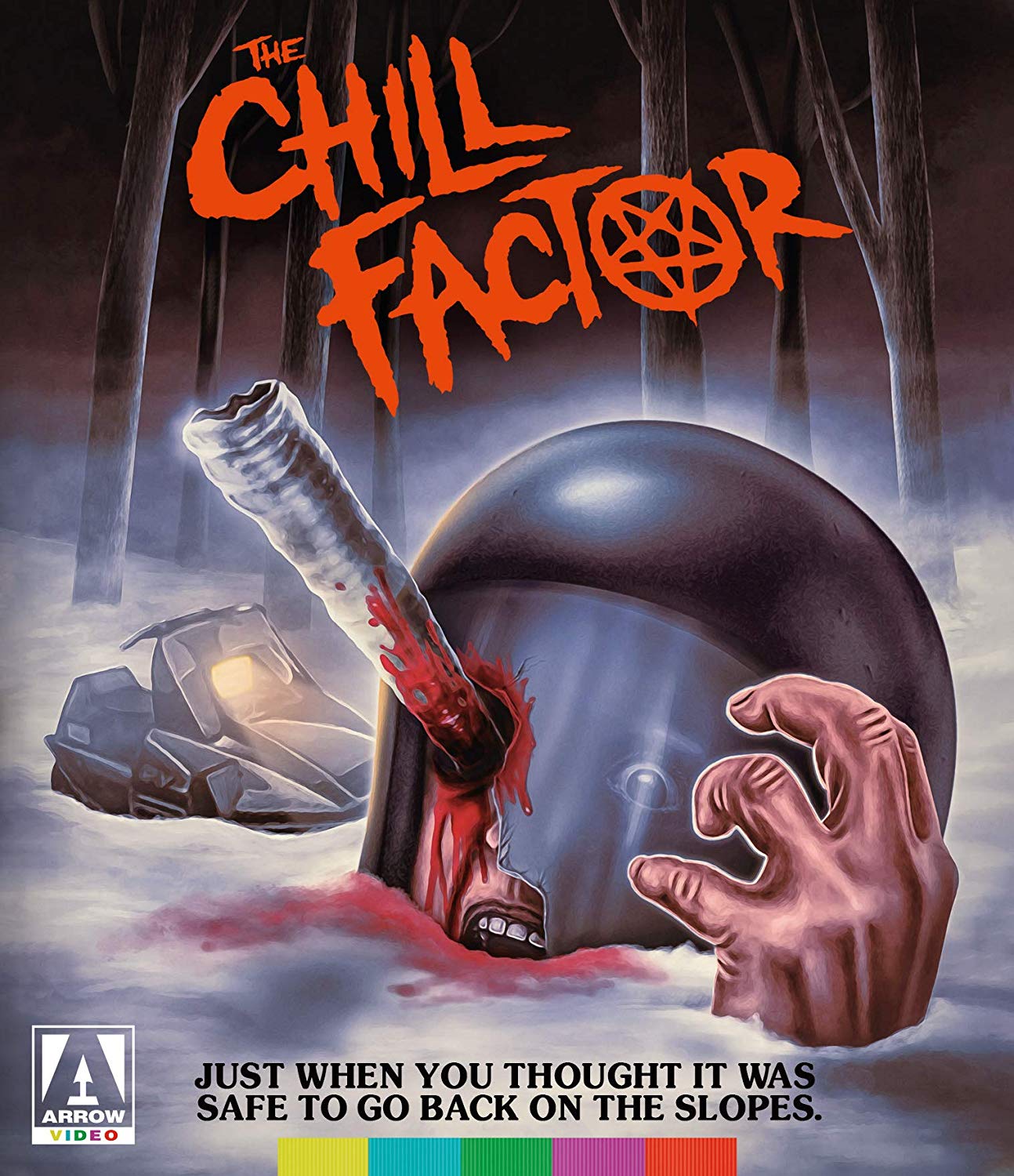 The Chill Factor is a film meant to be watched with friends or really inebriated. Arrow Video provides the solid Blu, you just need to provide the friends or alcohol.
Film
Blu-ray
Reader Rating0 Votes
3.5
Buy
Amazon

In the frigid and chilly winter of northern Wisconsin, what is a group of friends to do after getting in a terrible snowmobile accident? If you said to hold out in an abandoned boy scout camp, once led by a Satanic Cult, and whip out an ancient Ouija board and call on the Devil, first off you might want to seek help, and second, you’re almost on the nose. The only part you missed was the attempts at one of the main characters trying to bang his sister. Hey, I don’t write it, I just watch it.

The Chill Factor starts with an odd voice-over from a woman who sounds like she has been smoking 60 packs a day for several years. We learn she is Jeannie, one of the snowmobilers and girlfriend to Tom – the guy who loves his sister Karen a bit too much, and has the superpower to wreck a snowmobile in the middle of a frozen lake and still hit a bunch of trees with his head. The group, which consists of Ron, a black girl, the annoying Karen (dammit Karen!), and Chris the med student, bring the injured Tom to a creepy abandoned boy scout camp. Ron heads out in the night to get help, and in the meantime, the group find an old Ouija board lookalike named The Devil’s Eye. Jeannie is hesitant at first, but says screw it and proceeds to open up the gates of hell, which possess Tom. If you thought a non-possessed Tom was creepy with his sister, what do you think a horny demon-possessed Tom is like? *shudders* However, Karen is never possessed and seems to enjoy it. *double shudder*

The Chill Factor is a film you need to watch with friends. I wouldn’t recommend checking it out solo unless you get hammered beforehand, as the film would be dreadfully boring without someone else to riff off of when watching this low budget cheese-fest. I ended up watching it with my wife and her best friend. My wife hated the movie and forbid her friend and me to talk about it anymore after finishing it. The friend, on the other hand, understood what she was getting into and seemed to accept the film for what it was. She did feel it could be better, so I asked her what could have been different to make it any better. First off, she said the incest subplot needed to be fleshed out more (oooh k) as that was the hook that grabbed her at the beginning (ooooh k). She also felt that the movie could have stood to have more experienced actors, and some backstory on the cult and boy scout camp would have been helpful. I tend to agree with her on most of the points – I’m not so keen on a fleshed-out incest plot, but whatever gets your rocks off I say…you creepy bastard.

The Chill Factor is the second film from Windsor Lake Studios, with Trapped Alive (also released on Blu-ray from Arrow Video) being the first movie filmed in Eagle River, Wisconsin. The films aren’t winning awards, but they are considered cult classics by certain groups of horror fans, so Arrow Video has put a great amount of work into releasing the first of them.

The Chill Factor has a new 2K scan from the original film elements and the results are decent. There is a bit of film damage, but when compared to the included VHS workprint on the disc, you can see how much Arrow has done to get the film looking the best it can. The Blu features a MPEG-4 AVC Video codec with an average bitrate of 29877 kbps. The audio is presented in 24-bit 2.0 LPCM and besides the occasional low or tinny sounding dialogue, it has no serious issues. Arrow Video has this to say of the transfer and audio:

The Chill Factor has been exclusively restored by Arrow Films and is presented in 1.85:1 with stereo audio.

The soundtrack was sourced from a set of original 2″ tape masters.

All restoration work was completed at OCN Labs.

All original materials used in this restoration were accessed from Films Around the World.

Extra Features on the disc include a new audio commentary with Hank Carlson, who was the special effects artist on The Chill Factor. The commentary is moderated by horror writer Josh Hadley, who asks a lot of the questions us viewers would be asking, but sadly Hank doesn’t know much beyond what he was working on. We also are provided three other interviews. We have a sit down with production manager Alexandra Reed, an interview with stunt coordinator Gary Paul, an interview with makeup artist Jeffery Lyle Segal, and finally an interview with commentators Hank Carlson and Josh Hadley. The VHS workprint of the film has been provided, and honestly, the transfer isn’t too bad. Rounding everything out is a Still Gallery and finally a Trailer that spoils the entire film. It’s actually pretty impressive how much they spoil.

The Chill Factor is recommended as long as you have friends to watch it with. If you don’t have friends, first I’m sorry and I know what it’s like, and second, you might want to get really shitfaced before watching this movie. No matter what you decide to do, you’ll want to make sure you watch the film on Blu-ray from Arrow Video, as it’s jammed full of features and has all-around solid video and audio for this lesser-known demon possession/incest-filled/Satan-worshipping/snowmobiling horror flick.