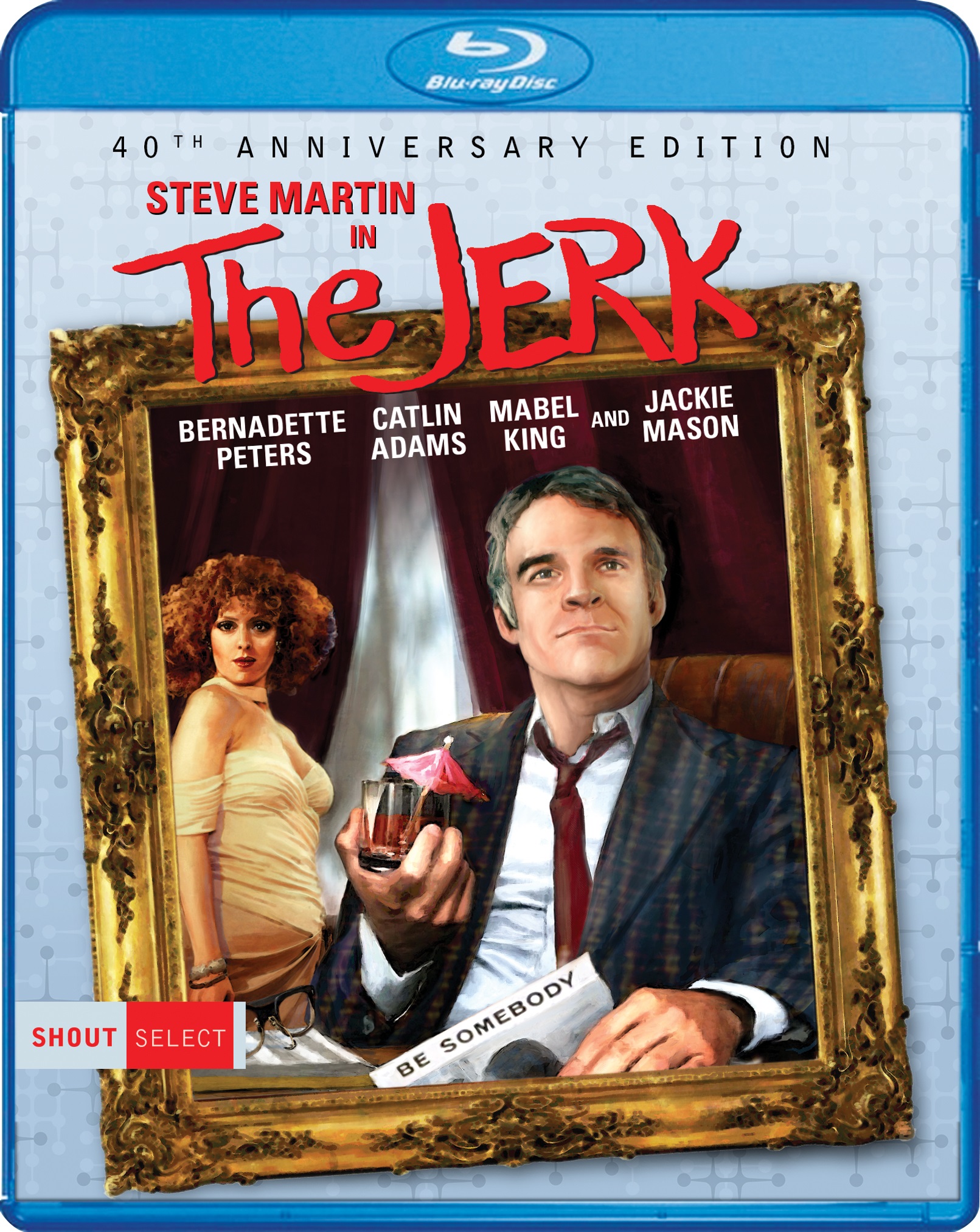 It's crude, hilarious, and will probably offend someone. What is not to like about The Jerk? Shout! Factory releases the best version on Blu-ray, making it worthwhile to own.
Film
Blu-ray
Reader Rating0 Votes
4.5
Buy
Amazon

The Jerk, directed by Carl Reiner, was Steve Martin’s first leading role and to a lot of people, it was his best film. Now that may or may not be true, but I do find the movie to be a funny, crude, and downright strange comedy. I grew up watching the film, so it holds a special place in my heart, which may cloud my judgement some. For lots of people nowadays, The Jerk will be seen as an offensive, and oftentimes racist movie, that will put off a lot of the more “PC” type crowd. To that, I say who cares! Just enjoy the damn thing!

The story for The Jerk has Steve Martin playing Navin R. Johnson, who was born a poor black child, but one day discovers he was adopted and is not black. He decides to venture out into the real world and explore life. From there we get all sorts of shenanigans from a sniper wielding psycho played by M. Emmet Walsh, to a nympho stunt woman, a loveable Bernadette Peters, and an invention that may make you go cross-eyed. It’s one crazy scene after another in The Jerk.

There are times where the jokes fall flat, but more often than not you will be laughing at the absurd story that doesn’t stop until the end credits are finished rolling. It’s the type of comedy that doesn’t provide much downtime between jokes, which is precisely what Steven Martin had in mind when writing the script with Carl Gottlieb and Michael Elias.

Shout! Factory has released The Jerk in their Shout Select line, making this one number 54. Shout! has provided The Jerk with a newly remastered 2K scan. The results make The Jerk look the best it has on any HD format. I’ve looked at screenshots of three different releases: Universal Blu-ray, Universal HD-DVD, and a German Blu-ray release. Of those three, the Universal Blu-ray looked the best, but it still had an abundance of sharpening added to the screen. Shout! Factory’s release, on the other hand, has avoided any sharpening, which means you get a more accurate picture of what The Jerk is intended to look like. One thing I did notice, though, is that all the releases have different framing. The German and HD-DVD releases are open the widest, and the Universal Blu is zoomed in the most. Shout falls somewhere in the middle. As to what version of framing is correct, without having the actual film elements, there is no real way of saying, but I didn’t notice any framing issues on the Shout Factory! release. The disc provides both English: DTS-HD Master Audio 5.1 and English: DTS-HD Master Audio 2.0.

Extra Features on this 40th Anniversary Edition are two new conversations with Steve Martin and Carl Reiner that runs roughly 26 minutes. It’s an enjoyable conversation with Steve and Carl bouncing off each other and offering plenty of memories of getting the film made. The next conversation is with Co-Writers Carl Gottlieb and Michael Elias, which runs roughly 24 minutes. This feature likewise is an informative conversation offering even more insight into the film. Everything else on the disc is from the older Universal release, such as Learn to Play “You Belong to Me”, The Lost Film Strips of Father Carlos Las Vegas de Cordova, and trailers.

Could Shout! Factory provided more features for The Jerk? Sure, but honestly there isn’t much more that can be said about the film. They got the two biggest stars to sit down and discuss which makes that right there almost worth the price alone. Adding on a video transfer that comes out the best of all the past releases makes this crude comedy Blu-ray worth picking up.

So remember, while you’re out picking a bail of cotton, be sure to pick up The Jerk on Blu-ray from Shout! Factory.